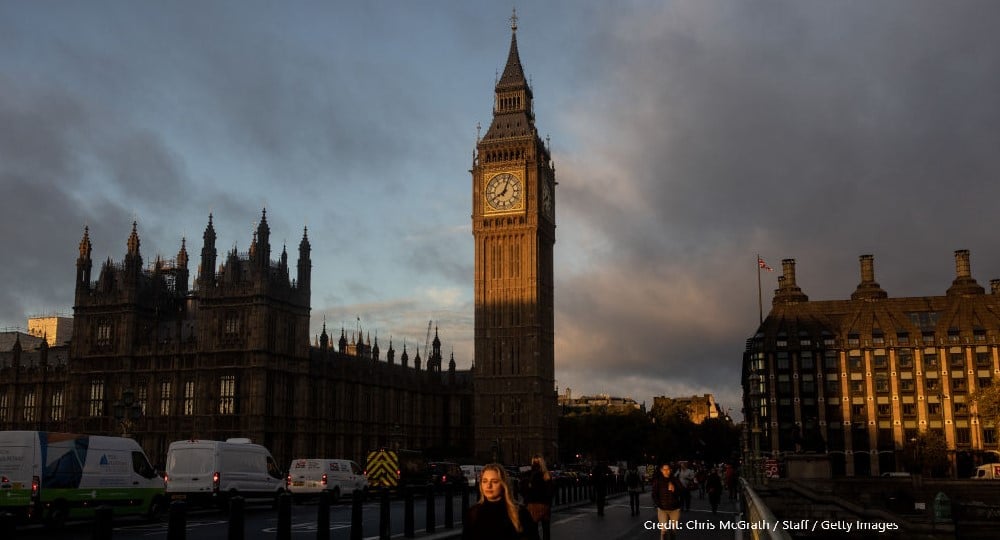 Sophie Stowers looks at the rules around Members of Parliament and financial interests, and the receipt of money from external sources such as second jobs.

In the aftermath of the Owen Paterson scandal last year, when the Conservative MP was found to have breached Parliament’s lobbying rules, attention turned to MPs and their jobs outside of Parliament. Traditionally, some Members of Parliament have continued to practice their former career – as doctors, journalists, academic or lawyers, for example – alongside their parliamentary work. This was seen to be a way of ensuring that Parliament was filled with experienced professionals, from a range of diverse industries and backgrounds.

Yet this practice has become more infrequent in the last decade, as Parliamentary careers become more demanding and MPs are placed under intense scrutiny in the aftermath of various sleaze and expenses scandals.

The associated rules around lobbying and declaring income have been tightened since 2010. Yet rules around MPs and second jobs remain relatively lax, with no limits on how long MPs can spend doing them compared to their parliamentary work, or how much they can earn. 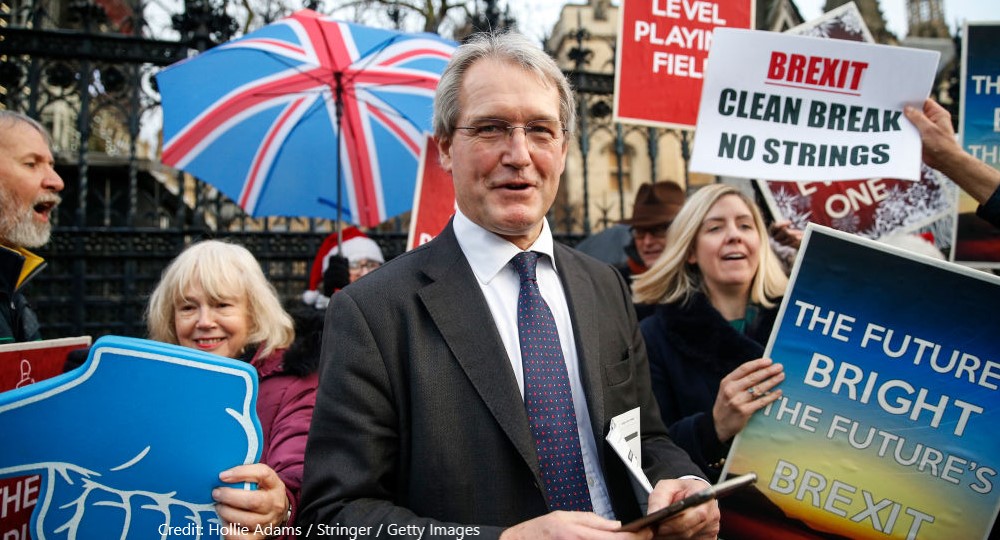 Do MPs have to declare the money or gifts they receive?

MPs are required to declare any earnings they make outside of Parliament, as well as any gifts, donations or shareholdings, and their sources. Examples of financial interest MPs must declare include:

They must do so within 28 days of receipt, via the Register of Members’ Financial Interests. This is a record of any financial interest an MP has which could, in theory, influence their actions in Parliament, and is updated every two weeks.

MPs must declare any relevant financial interest before participating in parliamentary activities. For example, if an MP wanted to participate in a debate on nationalising water, but had a pre-existing stake of more than the threshold of 15% in a water company, they would have to declare this before participating.

Can MPs have second jobs?

Yes, MPs can have second jobs so long as they are not a government minister. However, rules around the transparency of Members’ financial interests in general were tightened in 2010, including on second jobs. MPs must now declare all individual payments of more than £100 which they receive for outside employment, as well as payments totalling over £300 from the same employer in a single calendar year.

This includes any remittance that MPs get from working as a director or employee, including salaries, fees, gifts, taxable allowances (e.g. a company car) and redundancy. However, there is no explicit limit on total earnings or time spent on second jobs.

“This new code of conduct incorporated a majority of the Committee’s recommendations, including a ban on MPs taking up roles as parliamentary advisors or consultants and the proposed measures on contracts, and comes into place in March of this year.”

In recent years, a popular second job for many MPs has been advising firms on parliamentary procedure, legislation going through Parliament, and British politics in general.

For example, Liberal Democrat leader Sir Ed Davey formerly worked as a consultant on ‘political issues’ to a City law firm, earning £78,000 per year. However, he resigned from this role in 2021 in the aftermath of the Paterson scandal.

There is currently no rule against working as a political consultant, so long as MPs declare the fees they make from consultancy as described above, and do not lobby government or ministers directly on behalf of those firms or its clients. However, this will change in March 2023 (as described below).

Can MPs be paid for lobbying on behalf of outside sources?

Following the ‘cash for questions’ scandal in the 1990s, in which MPs were found to be accepting money from private businesses in return for asking parliamentary questions, rules around lobbying and advocacy were tightened. MPs are now banned from accepting payment or gifts in return for lobbying on certain issues, and as above, must declare all payments or donations.

There is a loophole, however, that six months after any payment or gift is received, MPs can campaign on behalf of the cause that has donated to them, as long as they do not get paid by that cause for a second time.

“In recent years, a popular second job for many MPs has been advising firms on parliamentary procedure, legislation going through Parliament, and British politics in general.”

There is also a rule that MPs must not accept donations, loans, or any other kind of support valued at over £500 from ‘impermissible‘ donors. These are donors that are not mainly UK-based, or are not UK registered companies, associations or trade unions.

Why are second jobs in the news again?

Attention was drawn to the issue of MPs’ second jobs and financial interests last year, when then-Conservative MP Owen Paterson was found guilty of breaching Parliament’s rules on lobbying. Paterson was thought to be using his position as an MP to lobby ministers and government departments on behalf of two companies, both of which employed him as a consultant.

Paterson’s proposed sanction from the Parliamentary Commissioner for Standards was a thirty-day suspension from the House, which was then delayed by a government motion which proposed redesigning the disciplinary process for MPs. The government later reversed its decision, and Paterson resigned.

Despite Paterson’s eventual resignation, questions had already been raised about whether some roles were compatible with being an MP, the payments members received for external employment, and the impact external influences are having on Parliament as a result. A recent investigation by Sky News and Tortoise found that MPs have collectively received £17.1 million from second jobs since the 2019 general election, the bulk of which has been earned by government backbenchers. 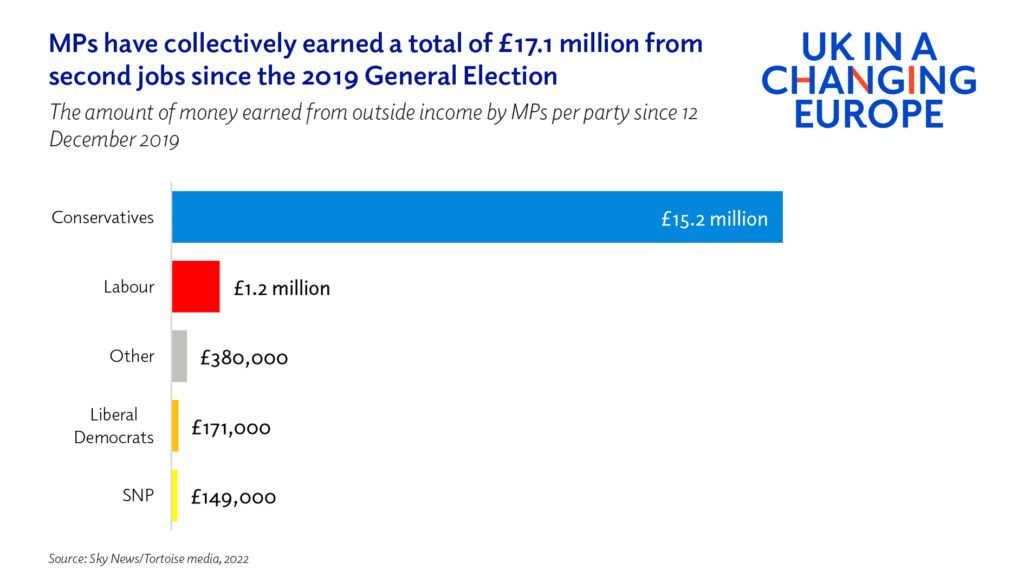 A particular concern is that, as parliamentary consultancy or communications roles have become more popular among MPs, the ultimate source of the external funds they receive has become more unclear. In these roles, MPs are often paid via a ‘broker’- a PR or comms firm – which connects them with the clients they ultimately work for and advise. Exactly who these clients are is often not disclosed.

There has also been concern that, given the amount of money second jobs can generate, MPs may spend more time pursuing outside interests than representing their constituents. Indeed, then-Prime Minister Boris Johnson argued that there should be ‘reasonable limits’ placed on how much time an MP can spend on a second job versus their day-to-day role as a Member, though how this would be policed is unclear.

Are the rules around second jobs being changed?

As discussed earlier, initial reforms to the rules around MPs and second jobs were made in 2010, following the expenses scandal and a report from the Committee on Standards of Public Life, an independent, non-governmental body. These reforms made the rules on financial declarations more stringent and transparent, and said MPs should be permitted to continue with external work ‘within reasonable limits’, but with no specific cap on time or earnings.

In 2018, the same Committee warned then-Prime Minister Theresa May that the recommendations made in the Committee’s report had not been fully implemented, warning of insufficient transparency, undue influence of external interests, and a Register of Members’ Financial Interests that was inaccessible.

“In December 2022, following on from the Committee’s recommendations, the Commons voted in favour of a new code of conduct for MPs.”

The Committee also stated that rules around second jobs should be amended to explicitly ban the acceptance of paid work as a parliamentary strategist, advisor or consultant, or any role that advises external organisations on how to influence MPs or parliamentary procedure. The recommendations were not accepted at the time.

The report resulting from this consultation recommended that MPs be banned from working as parliamentary consultants or advisers, and be required to sign contracts with external employers which explicitly set out the expectations of their role. It recommended that it be stipulated in the contract that the MP would not be required to lobby on behalf of said employer. This had actually been a requirement up until 2015, with MPs required to submit copies of any employment contract to the Parliamentary Commissioner for Standards, but this was dropped.

Another recommendation was that MPs who receive external funding should be completely banned from participating in proceedings where they hold a conflict of interest, as opposed to only being banned from initiating them.

The Johnson government had initially endorsed a cap on the amount of money MPs could make from second jobs, and a cap on the amount of time they could spend on them, in the aftermath of the Paterson scandal. However, in its submissions to the Committee’s consultation, it backtracked, arguing that it would be too difficult and impractical to enforce these limitations.

In December 2022, following on from the Committee’s recommendations, the Commons voted in favour of a new code of conduct for MPs. This new code of conduct incorporated a majority of the Committee’s recommendations, including a ban on MPs taking up roles as parliamentary advisors or consultants and the proposed measures on contracts, and comes into place in March of this year.

The government did, however, choose not to support the Committee’s recommendation that bespoke descriptors for MPs be added to the Nolan Principles of Public Life, or that ministers be made to declare donations or gifts of a certain value related to their role as minister within a given time limit, as backbench MPs must currently do.

What are the parties saying on this issue?

Labour leader Keir Starmer has endorsed the proposal in Gordon Brown’s review of the UK constitution, that second jobs for MPs be banned with some limited exemptions. These exemptions would be for MPs who need to work to maintain professional qualifications, such as doctors and lawyers.

PM Rishi Sunak has attempted to draw a line under the Owen Paterson saga by moving forward with the majority of the Committee on Standards’ recommendations on second jobs in December 2022, but has not gone much further than saying transparency is ‘very important’. 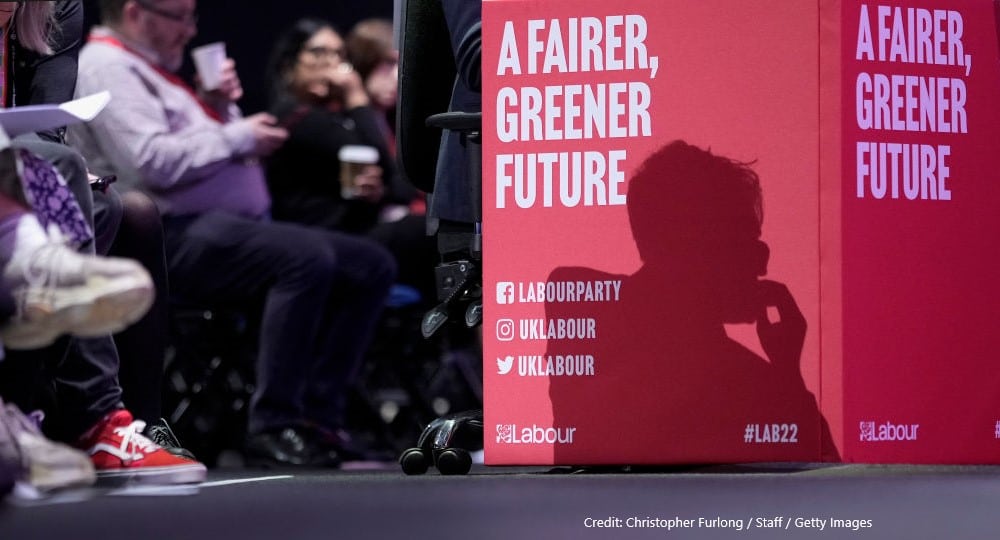 The Scottish National Party’s Westminster leader has described the rules around second jobs and external income as in need of ‘root and branch reform’, and has stated that the SNP is in favour of an overhaul of current regulations in pursuit of greater transparency.