Ratification of a Brexit deal 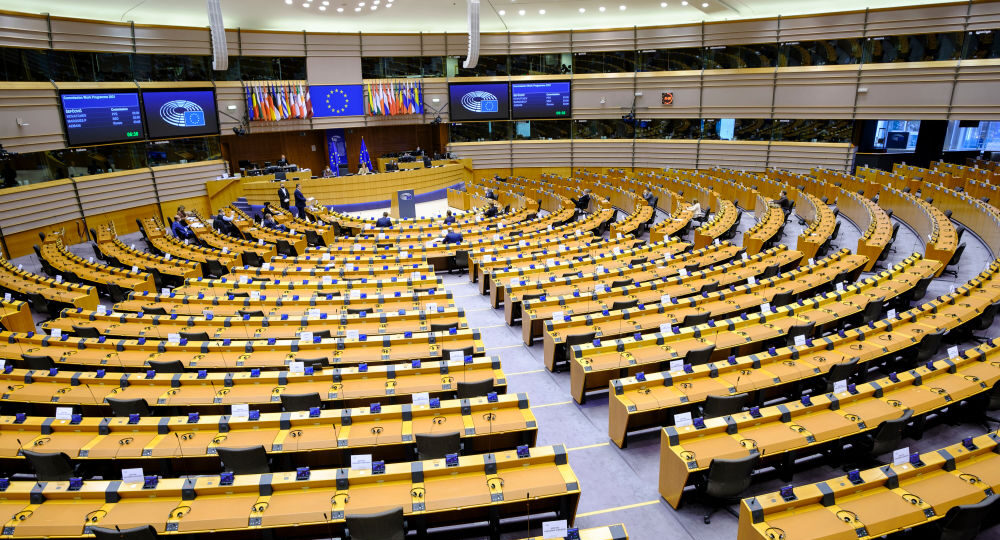 If the UK and EU reach a deal on a future relationship agreement, the deal needs to be ratified. What does that mean?

This process is called ratification. It can take different forms, from a simple signature to a parliamentary vote, and the internal rules of a state or organisation determine what counts as sufficient. In the EU, for instance, ratification is not complete until the relevant decision has been published in the Official Journal of the European Union.

To reach that point, approval is needed by the Council, Parliament and, when it is a mixed agreement, national and regional parliaments in member states. These hurdles are checks and balances to ensure that key interests have a say when agreements are reached on their behalf.

How does the EU ratify international agreements?

The process for ratifying international agreements in the EU is complex. However, once the Commission reaches agreement on the EU’s behalf, the process essentially boils down to gaining the approval of the two main legislative institutions: the Council and Parliament. If an agreement is mixed, national and regional parliaments must also ratify before an agreement can apply in full.

Once an agreement is reached, the Commission recommends that the Council sign and states whether, in its opinion, the agreement is mixed or not. The agreement then goes through a process called ‘legal scrubbing’ and translation to reach a definitive version of the text.

Soon after an agreement is reached, EU leaders give their approval. For an agreement with the UK, this would likely be done via the conclusions of a European Council summit.

After EU governments have approved an agreement, it is sent to the European Parliament for its consent. The Parliament plays a notionally secondary role in ratifying such agreements, as it can only approve or reject them, not make amendments. Nevertheless, the Parliament still wields a veto.

International agreements are referred to the committee responsible – in the UK case this will be the Foreign Affairs (AFET) and International Trade (INTA) committees jointly. The committee(s) then scrutinise any agreement and draft a report to submit to the whole Parliament, incorporating the opinions of other interested committees, recommending whether to accept or reject it.

This recommendation does not bind MEPs when they vote, but it is a clear signal of the Parliament’s will. The Parliament has to approve such agreements by a simple majority of votes on the day, ensuring there is a minimum quorum of at least a third of MEPs present. For some agreements, such as accession of new members to the EU, an absolute majority of Parliament’s constituent members is required.

After the European Parliament’s consent, the Council must then adopt a decision confirming the agreement. As soon as this has been published in the Official Journal, the ratification process, at least for non-mixed agreements, is complete.

If the agreement is mixed, the Council adopts a decision provisionally to implement the agreement and indicates which parts will not be implemented, awaiting national ratification by member states.

What about ratification in the UK?

In the UK, the system is much less rigorous. There is no requirement for a debate in Parliament (though in practice there likely would be on an agreement with the EU) and, like the European Parliament, the UK Parliament cannot make amendments. The devolved executives and legislatures have no formal say in ratification.

Ordinarily, a treaty must be laid before Parliament for 21 sitting days before ratification can take place. However, this process can be speeded up if necessary. If in that time either the Commons or Lords passes a motion against ratification, the Government must lay a statement before Parliament explaining its justification for ratifying.

If the Commons passes a motion against ratification, a further 21-day period is triggered and this process can, in theory, continue indefinitely with subsequent motions.

What does this mean for the deadline for a UK-EU agreement?

The EU’s chief negotiator, Michel Barnier, had originally said that a full legal text needed to be agreed by the two sides by 31 October at the latest to allow time for ratification. However, it now appears that 15 November is the working deadline.

Some think the absolute final deadline could even be pushed back a little further. Ultimately, because the Brexit process is unique and the time needed for ratification is not fixed, it is difficult to predict precisely when the final cut-off point for an agreement would be.

How long does ratification usually take?

There is no standard time for ratification. The UK has said it is looking for a deal like the EU’s agreement with Canada. That agreement took well over a year, or 63 weeks, to gain provisional ratification of the EU-only parts. This shows just how unusual a shortened timetable of six weeks for a UK deal would be.

On the UK side, the Government introduced legislation to implement the Withdrawal Agreement on 19 December 2019 and the bill passed five weeks later on 23 January 2020 to allow the UK to leave by 31 January. 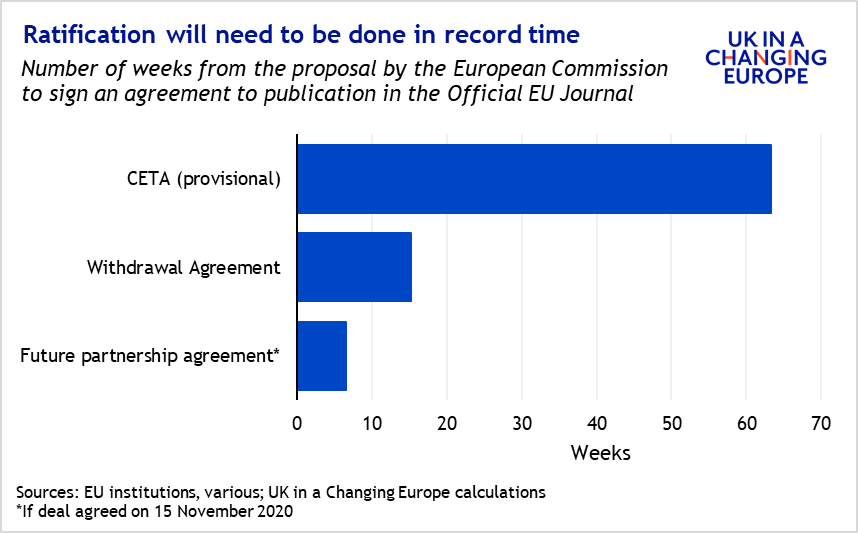