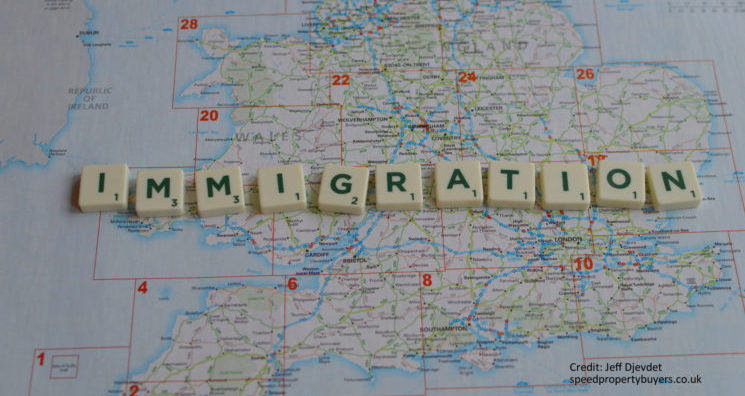 One of the policy options that has attracted attention in the UK debate about post-Brexit immigration policy is the ‘Australian-style points-based system’. This commentary explains how the Australian system works and what it might mean to introduce something similar in the UK.

What is a points-based system?

A points system is a way of selecting labour migrants based on their characteristics, such as their educational qualifications, language proficiency, work experience and occupation. Points systems are generally used to select migrants for economic purposes, rather than for family migrants, refugees or international students.

The best known examples of points systems are from Canada, Australia and New Zealand. Points systems can be designed in many different ways, but they are commonly marked by three key features:

Most countries do not use points-based systems to select work migrants but instead rely on ‘employer-driven’ work visa systems. In employer-driven systems, prospective migrants must have a job offer lined up with an employer who is willing to sponsor them.

However, the gap between employer-driven systems and points-based ones in which migrants can move without a job lined up has narrowed over the past decade, as some of the governments using points systems have tried to increase the role of employers (e.g. by prioritising migrants who have job offers).

How does the Australian points-based system work?

The debate about whether the UK should introduce an Australian-style system after Brexit can be confusing because it is not always clear what aspects of Australia’s immigration policy are being proposed for the UK. There are many different types of work visas in Australia, with different eligibility criteria.

The best-known points-tested visa in Australia is known as the ‘Skilled Independent’ route, which provides visas for permanent residency. However, variants of the same points test are used in other visas, such as devolved state/territory nominated routes. There is also a separate points test for investors and entrepreneurs.

How does it work? To apply, prospective migrants first submit an ‘expression of interest’ online. Some are then invited to make a visa application if they meet various basic requirements (e.g. minimum language and age criteria) and if they score highly on the points test summarized in Table 1.

In the ‘skilled independent’ route, a candidate must earn a minimum of 65 points from the points table below, although often in practice more points than this are needed because only the highest ranked candidates are invited to apply for migration. In June 2019 as the migration ‘program year’ drew to a close, applicants had to score at least 85 points to be invited, up from 70 points six months earlier in December 2018. 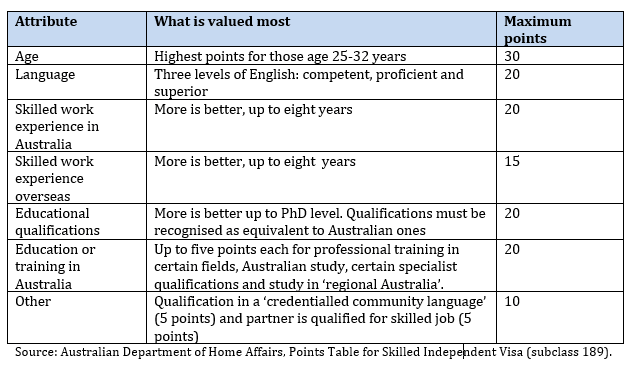 By way of example, a candidate who had never worked or studied in Australia could earn 70 points if they were 32 years old (30 points), spoke ‘proficient English (10 points), had five years of skilled experience overseas (10 points), a recognised Bachelor’s degree (15 points) and had a skilled partner (five points). When 85 points are required, a candidate who had not worked or studied in Australia would struggle to score enough points to qualify unless they received the highest scores in almost every other area.

The Australian government imposes limits on the number of people who will be invited to apply in each occupation, in order to avoid a small number of occupations dominating the route. For example, in the 2018-19 program year, the Australian government determined that in addition to any workers sponsored by employers or nominated by a state or territory government, it would be desirable to admit a maximum of 1,000 childcare centre managers, 1,224 medical imaging professionals, and 3,894 management consultants (among many others roles). This means that points requirements are higher in certain occupations like accountants (95 points required in June 2019), auditors (90 points) and electronics engineers (90 points).

Not all work migrants have to pass the points test. For example, there is a different route without a points test for people who have been nominated by an employer.

Doesn’t the UK already have a points-based system?

For non-EU citizens taking up a new job, the UK has an ‘employer-driven’ system, which is the norm across high income countries and also exists in Australia. This system, known as Tier 2 (general), requires skilled workers to find an employer who is willing to sponsor them to fill a specific vacancy. The employer must meet various requirements such as advertising the job in the UK and paying the regulated salary for the occupation.

This system does assign points to different criteria, as show in Table 2. However, there is no flexibility on how to meet the criteria. Candidates for Tier 2 (general) visas must earn 70 points to qualify, and there is only one way to do that: by meeting all of the criteria. This is fundamentally different from the points system in Australia. In the UK, the points awarded are simply a way of organising information.

There is one important but niche exception to this. There is a cap of 20,700 places under the UK’s Tier 2 (general) system, except for certain jobs that are exempt and whose numbers are not limited, such as high earners and doctors and nurses. Most of the time, this cap has not been met. However, when the monthly allocation of Tier 2 (general) places is reached, applicants are prioritised using a different points test. This points test, which the Migration Observatory has explained elsewhere, scores applications based on the proposed salary, the type of occupation (whether it is considered a PhD-level or shortage occupation), and whether the person is a graduate recruit. It is slightly more similar to the Australian system in that it is designed to rank and prioritise applications, although the criteria it uses are quite different.

In addition, the UK used to have a points system more similar to the Australian model in the mid-2000s, which admitted non-EU migrants without job offers. This system was initially known as the Highly Skilled Migrant Programme and later became Tier 1 (general) of the Points-based System. The government closed it in 2010-2011, however, citing the concern that some of the migrants it selected were unemployed or only found work in low-skilled occupations.

In summary, the UK does already have a points test in its immigration system but it is only used in narrow circumstances. The part of the UK immigration system that is officially known as the ‘Points-based System’ is a points system in name only, and is not similar to the Australian one. And something that really was a points-based system conceptually similar to the Australian one used to exist a few years ago but no longer does.

What are the differences between the UK’s work-visa system and the Australian points-based system?

What it would mean in practice to adopt an ‘Australian-style’ system in the UK would depend on what aspects of that system were implemented.

Some aspects of the Australian immigration system are already quite similar to what happens in the UK. For example, employers can sponsor workers to fill specific vacancies in Australia (without passing a points test), much as they can in the UK.

Some are different. Table 3 summarises some key differences between the UK’s arrangements for admitting skilled workers looking to take up new employee jobs (i.e. under the Tier 2 (general) route). For more background on the UK’s work-visa system and the range of routes that exist, see the Migration Observatory briefing, Work visas and migrant workers in the UK. 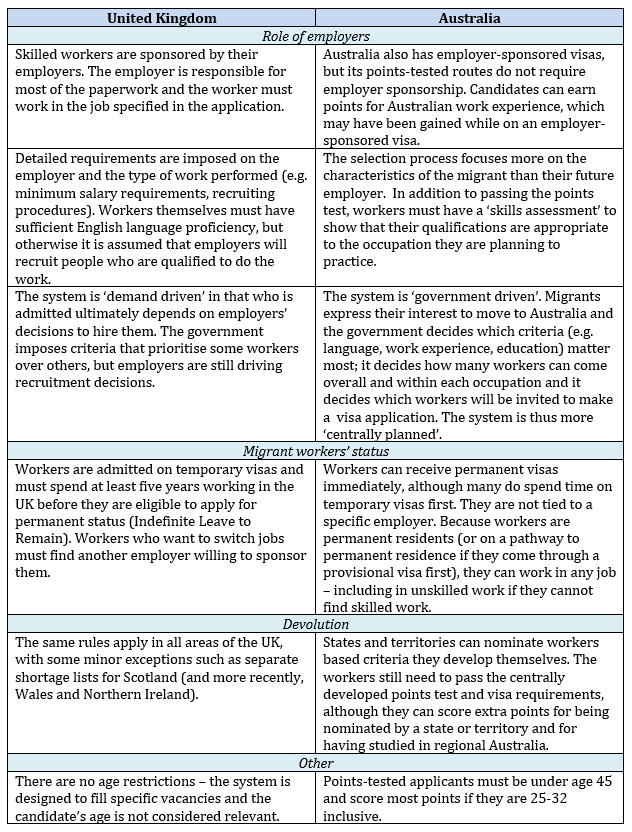 Would an Australian-style points-based system increase migration to the UK?

Australia is a country with relatively high levels of migration, by international standards. The points system has been used over the decades to increase migration above the level that would be achieved by relying only on employer sponsorship. In 2018, 29% of the population of Australia were born abroad, compared to an estimated 14% in the UK. This reflects decades of relatively liberal policies towards skilled migrants.

However, it is not possible to say whether or how much introducing an ‘Australian-style points system’ to the UK would increase migration, without knowing how this system would be designed. A points system is simply a way of ranking and prioritising applicants for work visas.

In principle, it would be possible to implement a restrictive points system that admitted relatively few people, or liberal one closer to the model used in Australia. A restrictive points system, for example, might require all workers to be sponsored by employers as well as meeting a points-based skills threshold. A system of this sort exists in Austria for skilled workers in shortage occupations, for example.

What are the advantages and disadvantages of points systems?

Debates about the impacts of points systems have focused on one feature in particular: the ability to qualify without an employer sponsor. This has both advantages and disadvantages that are two sides of the same coin.

On the one hand, workers entering under the Australian points system are less dependent on their employers and do not need permission to switch between jobs as they do in the UK; as a result, they are expected to have more bargaining power and to operate in a more competitive labour market.

The most common criticism of points systems is that if workers do not have employment lined up, it is difficult to know whether they are actually employable. The system relies on the government’s perception of what skills are valuable, rather than on the views of the employers who are to recruit them. Evaluation data from Canada suggested that highly educated migrant workers selected without a job offer during the 2000s were less likely to find skilled work after arrival compared to those selected by employers. As noted above, the government closed the UK’s previous ‘Australian-style’ points-based system in 2010-2011 because of concerns that the people it admitted were not finding skilled work.

However, points systems do not have to admit workers without job offers. It would be possible to require all applicants to have a job offer, or only give visas to people who have skilled work experience in the country (and thus demonstrated that they are employable in the UK).

The other implications of points systems have not received as much scrutiny. However, criticisms include the fact that eligibility criteria can be unpredictable if candidate are ranked against each other and a specific number admitted. This is because the bar for admission will be higher in periods when more other people are applying. (This was one of the outcomes of the UK’s mini-points test to prioritise oversubscribed Tier 2 (general) applications when the cap on this category was hit, described above.)

In summary, the impacts of introducing a new points system in the UK would depend crucially on how the system was designed, including questions such as what points were issued for, whether the route was be for temporary or permanent visas, and whether employer sponsorship would still be required.

Thanks to Rhys Butler, Benson Wong and Carlos Vargas Silva for comments on a previous draft.