The Council of the European Union 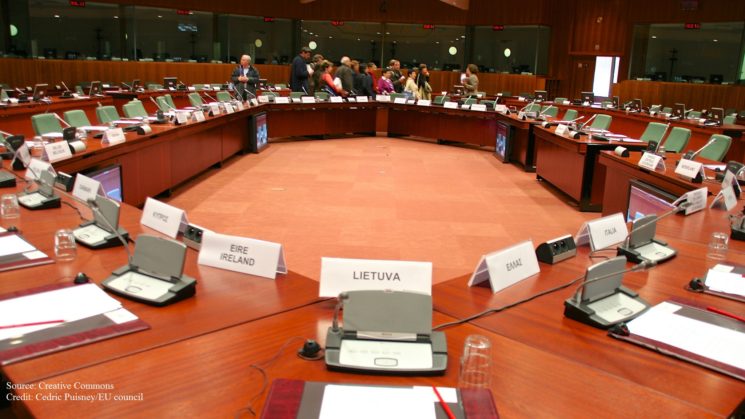 What is the Council of the European Union?

The Council of the European Union is one of the EU’s key institutions. Together with the European Parliament, it is both the EU’s lawmaker and the budgetary authority of the EU. It is the body where member state governments meet to negotiate, make EU laws and take key decisions in foreign and security policy, trade, and economic policy.

Why is the Council important?

Negotiating EU laws. Member states negotiate with each other and with the Commission within the Council, and reach a collective decision on whether to approve, amend or reject proposals that the Commission has tabled. In most policy areas, the approval of both the Council and the European Parliaments is required for a Commission text to become law.

Coordinating policies, which includes monitoring national economic and fiscal policies of the member states, as well as dealing with the legal and practical aspects of the Euro, adopting an EU policy framework for education, culture, youth and sport, and drawing up annual employment guidelines and recommendations for member states

Implementing the EU’s common foreign and security policy, which includes the EU’s development and humanitarian aid, as well as defence and trade, policies, within guidelines laid down by the European Council. With the High Representative of the Union, the Council is responsible for ensuring that the EU’s external action is coherent and effective.

Concluding trade agreements. The Council mandates the European Commission to negotiate with non-EU countries and international organization on behalf of the EU, monitors negotiations, and decides whether to adopt the resulting text, once the European Parliament has given its consent and the agreement has been ratified by the member states.

How is the Council organized?

Although its name suggests that it is a single entity, the Council of the European Union is in fact highly fragmented. Its work is conducted at three different levels — ministerial, diplomatic, and official – and in policy-specific forums.

Ministers: At ministerial level, the Council meets in 10 different formations as follows:

Each formation is attended by the national ministers responsible for the policy in question from all the member states. The specialization is intended to ensure that decisions are taken by ministers in their area of responsibility and that ministerial time in Brussels is not wasted.

The number of meetings varies between configurations. Some meet three times a year, others meet monthly. The type of responsibility also varies. Whereas most formations deal directly with policy questions, the General Affairs Council prepares meetings of the European Council, discusses issues that cut across several policy areas, and promotes consistency among the actions of the other formations. Furthermore, each of the formations are overseen by the Council Presidency, a position that rotates between the member states and is held by each country for six months. The Foreign Affairs Council is an exception, however, and is chaired by the High Representative of the Union for Foreign Affairs and Security Policy. The individual holding this post, currently Federica Mogherini, sits in both the Council of the European Union and the European Commission.

COREPER II prepares the work of General Affairs Council, Foreign Affairs Council, Economic and Financial Affairs Council, and Justice and Home Affairs Council. COREPER I is responsible for some aspects of agriculture and fisheries, competitiveness, education, youth, culture and sport, employment, social policy, health and consumer affairs, environment, and transport, telecommunications and energy. Both these powerful committees meet weekly and are chaired by the rotating Council Presidency.

As the Financial Times’s Lionel Barber has observed, COREPER I and II perform a dual function. At EU level they are ‘a clearing house for the Council’, ensuring that as many issues as possible can be resolved before referral to ministers. They also serve as ‘a bridge to national capitals’ from Brussels.  Most member countries organize their input to EU decision making around the weekly meetings of COREPER. National ministries at home work through national coordinating systems to ensure that that the appropriate positions is taken by their representative in Brussels when an agenda item appears that is that likely to affect them.

Officials: The third and broadest tier of the Council structure — the base of the pyramid — are the 150 or more working parties and committees. These are composed of national civil servants from the member states. Working groups are created by COREPER and cover all areas where the Union has policy responsibilities. They meet as frequently as the volume of business requires.

Who coordinates the work of the Council?

The General Affairs Council assists in overseeing the various ministerial formations, but the real work is done by the Council Presidency and the General Secretariat of the Council. Both bodies contribute importantly to the coherence of the Council’s work.

The country holding the Council Presidency is responsible for preparing the agenda and chairing all Council meetings at all levels, except for foreign affairs. The Presidency also liaises with other EU institutions, particularly the Commission on policy matters and the Parliament in negotiating legislation. Inside the Council, the presidency is expected to provide a neutral chair, negotiate compromise and issue initiatives where action becomes necessary. Since sixth months is a relatively short period, a trio arrangement has been introduced which involves the country currently holding the Council Presidency working closely with the country that has just held it and the country that will next assume office. Though each country is expected to determine a more detailed programme for the six months that it will occupy the Presidency, the trio sets long goals and outlines an 18-month agenda that responds to the topics and issues that the Council will address.

How does the Council work?

In most areas of its business, the work of the Council begins when it receives a legislative proposal from the Commission. The same document is also transmitted simultaneously to the European Parliament. As co-legislative bodies, the Council and the Parliament examine the Commission text in parallel. There can be up to three readings before they agree or reject a proposal.

At each reading the proposal passes through three levels at the Council. Deliberations begin in the working parties, where the text is scrutinized by civil servants from the member states. Since the emphasis at this stage is on the technical merits of the proposal and the expectation is that the national delegations will go through it line by line, member states usually ensure that their top experts are present. There is no obligation or expectation that the working party will reach agreement. At whatever position the working group arrives, the outcome of the discussions is reported to COREPER.

COREPER’s treatment of a proposal is largely determined by the state of discussions in the working party. If agreement has been reached, the text can be passed to ministers without further discussion. If a few issues are outstanding, COREPER can try to resolve them itself. If the delegations are some distance apart, COREPER may ask the working group to take another look. As a result, some proposals can reappear on COREPER’s agenda several times.

Issues on which COREPER has been able to agree will appear on the Council agenda as an item on which no discussion is necessary, although any minister can always ask for a proposal to be reopened.  About two thirds of the Council’s agenda consists of items on which agreement has been reached, but since only ministers can adopt decisions, they can only be signed off at this level. The other third includes matters leftover from previous meetings, texts on which neither COREPER nor the relevant working party were able to reach agreement, and issues so sensitive that only ministers can address them.

How does the Council vote?

The decision to take a vote is made by the Council President. The Commission can also request a vote, but such a proposal needs to the support of a majority of the Council’s members. Depending on the policy area in question, the Council takes its decisions by one of three methods:

Qualified majority is used more often when the Council is deciding whether to adopt a law. The results of Council votes are automatically made public in these instances. However, in the vast majority of cases – 87 per cent according to Hix (2015) – the Council reaches decisions by consensus.

What is the Council’s history?

The Council of Ministers can trace its origins to the Treaty of Paris. Although the Treaty gave the ‘Special Council’ of the European Coal and Steel Community a limited role, it grew in authority as the High Authority – the forerunner of the Commission — regularly sought its endorsement.  This practice, rather than the formal provisions of the Paris Treaty, provided the model for the EEC Treaty, which made the Council of Ministers its central decision-making body.

More recently, the Council has been affected by a number of developments. First, the Council has had to adapt to constantly changing circumstances. On the one hand, it has accrued a number of special responsibilities in economic and monetary union, employment, common foreign and security policy, and justice and home affairs. On the other, it has developed capacities that have then been taken away. For example, following the Treaty of Amsterdam, the Council assumed operational responsibilities in foreign policy with the creation of the post of High Representative – the first time it had stepped beyond the functions of a secretariat. Yet with the Lisbon of Treaty, these responsibilities were transferred to a new institution, the European External Action Service.

Third, the Council was historically the EU’s leading law-making body. It alone effectively chose whether to accept, amend or reject the Commission’s legislative proposals. With a series of treaty changes that have progressively strengthened the European Parliament, the Council’s power has been diluted. In most areas of policy, it co-legislates with the European Parliament rather than acting alone.

Despite these changes, however, the Council remains at the centre of EU decision making and, as the institution that brings together representatives of the member states at all levels, is key to the EU’s legitimacy.