What is it and how is it seen from a UK perspective?

The EU budget funds various policies and programmes administered directly by ‘Brussels’, as well as the various institutions, such as the European Commission and the European Parliament. The EU budget has an annual outlay of around €150 billion in recent years, which amounts to around 1% of the gross domestic product of the EU.

By contrast, the proportion of GDP spent by the federal level of government in mature federations such as the United States, Canada or, indeed, Germany is around 20-25% of GDP, highlighting the rather limited scale and scope of the EU level by comparison. Almost all the public spending that takes place in EU countries is, instead, undertaken by national, regional and local governments. In aggregate, these other levels of government for account for just under 98% of all public spending, with just over 2% spent by the various supranational institutions, principally the European Commission.

The EU raises its revenue mainly from direct contributions from the member states of the EU, based on their level of prosperity, with a small proportion of the EU’s revenue coming from the duties paid on imports into the EU from the rest of the world.

Despite its relatively small size, the EU budget has long been a source of controversy in the UK’s relationship with the EU. The main concerns are that the money is spent on the wrong things, that controls on the spending are too lax and that it costs the UK too much.

For many years, the bulk of the EU’s spending went on supporting agriculture, through the much criticised Common Agricultural Policy (CAP) and on support for regional development (known as Cohesion Policy). Although the CAP proportion has gradually fallen to around 30% of the total, it remains substantial, but because the UK has a small farming industry compared with other EU members, this meant that spending in the UK was lower than what the UK was asked to pay. As a result, the UK (along with Germany) has always been a net contributor to the budget, an outcome that led to the famous rallying cry from Margaret Thatcher, ‘I want my money back’ and the agreement (reached in 1984, and continued ever since), to give the UK a rebate on its payments.

UK commentators have often also complained about wasteful spending by the EU and the fact that the EU Court of Auditors consistently refuses to ‘sign-off’ the EU’s accounts. However, in both cases, the complaints are prone to be exaggerated. There is no doubt that instances of waste can be found and that it is always easy to find particularly striking examples of extravagance, but similar cases arise everywhere in public spending. The reluctance of the Court of Auditors to provide the ‘statement of assurance’ stems mainly from having a standard so demanding that no public authority would achieve it. Certainly, cases of fraud are found, as they are by equivalent national auditing bodies, but most of the objections are about relatively minor administrative errors rather than instances of deliberate deception.

How is the EU budget agreed?
The EU budget is subject to two levels of negotiation, the most crucial of which is the multi-annual financial framework (MFF) agreed periodically by the EU’s leaders. The MFF establishes the overall level of the budget over (at present) a seven year period, indicative totals for how much spending will be allocated to different policy programmes and amounts of spending to be directed to each member state.

An annual budget is then agreed in which detailed amounts for specific items of expenditure are settled, provided that they remain within the ceilings dictated by the MFF. At both levels, there is co-decision by the Council of the EU (representing the member states) and the European Parliament, although in practice it is the heads of state and government (the European Council) that has hitherto had the main say.

A parallel decision on how to raise EU revenue is taken periodically, but with the Parliament having only a consultative role.

The chart below shows how much is allocated to the main headings of expenditure for the current (2014-20) MFF period. ‘Other spending’ includes all spending outside the EU, environmental, security and fisheries spending and a range of smaller programmes. 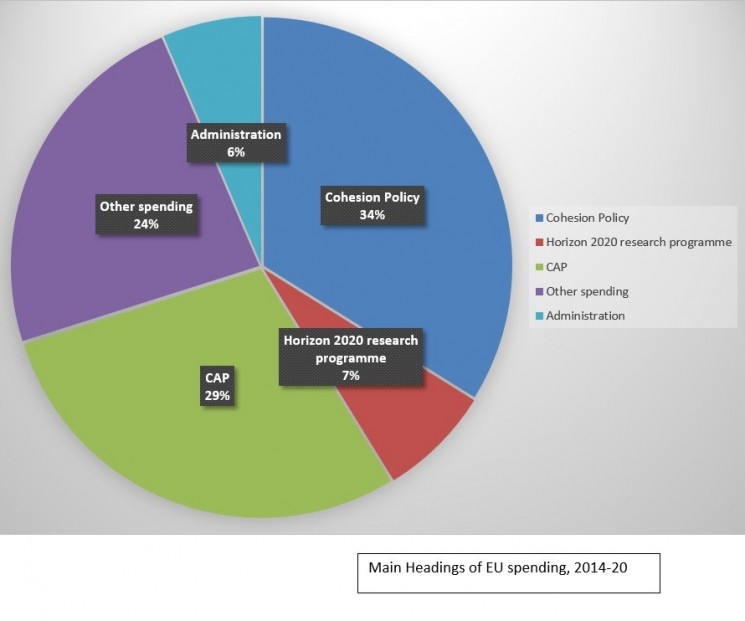 What does it cost the UK?
There are several ways of measuring what the UK has to pay towards the EU budget and, perhaps unsurprisingly, widely differing political interpretations of the true costs and whether they are fair.

Further complications arise because, for various reasons, the annual figures can fluctuate quite substantially, even though the underlying deal is the seven year MFF one because EU programmes which run over several years tend to under-spend in early years before catching up later. In particular, regional development projects and Horizon 2020 research projects which last several years often have very uneven patterns of spending over time.
There are also two distinct concepts of spending: ‘commitments’ which refers to the planned expenditure agreed at the start of a period; and ‘payments’ which is the amount actually spent in that period. Because some planned spending may not happen, payments are almost invariably lower than commitments.

The gross contribution is an assessment of what the member state is expected to pay, calculated as a proportion of its gross national income (GNI, a close cousin of GDP). Since the budget overall is 1% of EU GDP, the starting-point for each member state is also 1% of GNI, but these figures are hypothetical because of subsequent adjustments. In addition to the UK rebate, several other member states also have forms of ‘correction’ (the politically correct term for rebates). One consequence of some member states receiving corrections is that others have to make up the difference.

The amount UK and other tax-payers actually spend is the easiest concept to grasp, because it is what the Treasury reports in its accounts. On this measure, which takes account of the ‘money back’ from the rebate, the UK generally pays the smallest share of its GNI of all member states.

The net contribution is the difference between what a country pays into the budget and the EU spending it receives. Even here there is ambiguity: the Treasury data counts only money flowing back to the UK public accounts, whereas the Commission also records flows to the private sector.

In 2013, the UK net contribution, according to European Commission data on what is called the ‘operating budget balance’, reached 0.46% of UK GNI, the fourth highest in the EU after Sweden, Denmark and Germany, and a little more than the Netherlands, Belgium, Austria and France.

In 2008, however, the UK net contribution was just 0.05% of GNI, only the twelfth highest, and a long way short of the Netherlands at 0.46%. The biggest net beneficiaries were Hungary (5.3% of GNI), the Baltic countries and Bulgaria. Of the pre-enlargement EU15 countries, Portugal and Greece (just under 3% of GNI) were also substantial net beneficiaries in 2013.

In conclusion, depending on the indicator chosen, the UK contributes least or is among those paying most into the EU budget!

Options for changing the budget

The EU budget has proven to be very hard to change, reflecting the fact that it requires unanimity among the member states, as well as striking a deal with the European Parliament. Indeed, since its last major reform in 1988, it is noteworthy that the main change has been a relative increase in spending on Cohesion Policy and a reduction in the CAP. There has been some expansion of the EU research budget, but many areas of EU spending, such as on border security, international development aid or boosting innovation, remain pretty limited. Over time, the relatively less well-off members of the EU, especially those in central and eastern Europe, have secured larger shares of EU spending.

The UK has consistently called for a smaller EU budget, focused more on the EU’s competitiveness challenges, but for less spending on agriculture and for limiting Cohesion Policy to the poorer member states. Other net contributors broadly support these demands, although France in particular opposes reductions in CAP spending. The UK is also opposed to altering the method of funding the EU budget which could come about by creating new EU taxes to replace direct national contributions, a change strongly advocated by the European Parliament and supported by some countries.

The two principal official sources of information are the Directorate-General for Budget of the European Commission and the UK Treasury. DG Budget provides detailed information on the figures in the budget, a frequently asked questions page and many publications and reports about the execution of the budget. See this link.

The UK Treasury publishes an annual report on the EU budget in which it provides a full description of the EU budget and how it interacts with EU public finances. The latest issue can be downloaded from this link.

For a more academic discussion by Iain Begg of whether standard analyses of public finances help to understand the EU budget click here.

Download this explainer on the EU Budget as a two-page PDF here.