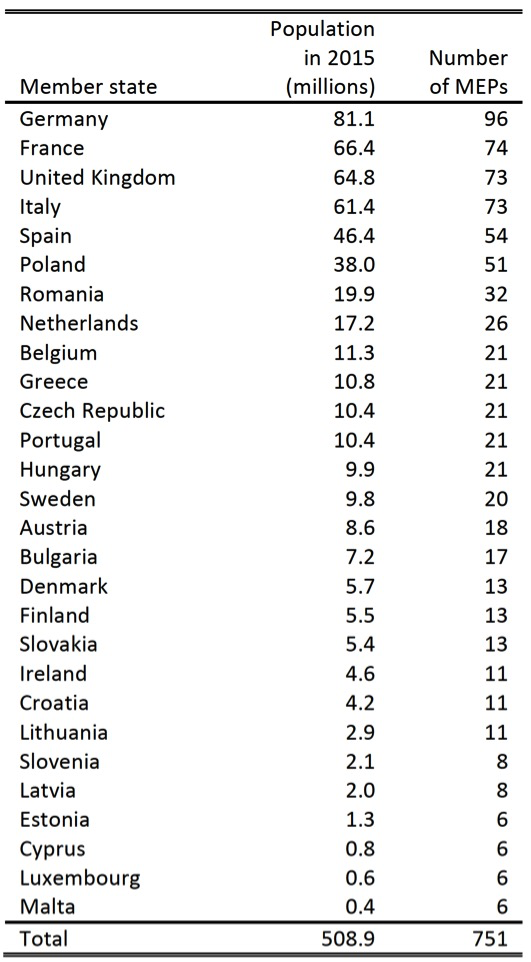 One of the most dramatic changes in the institutional set up of the European Union has been the increased power of this institution. The MEPs now have the power to amend EU laws and elect the Commission, as well as several other key powers.

In almost all areas of policy the European Parliament has the same law-making power as the Council of the EU (composed of the 28 governments). The EU legislative process is illustrated in Figure 1. It starts with a proposal by the Commission, and the Parliament and the Council then amend the proposal as they see fit – usually by a qualified-majority in the Council and a simple majority (a majority of those voting) in the Parliament. Once the Council and Parliament have agreed a text it becomes law, and passes to national governments to implement, overseen by the Commission and the Court of Justice. 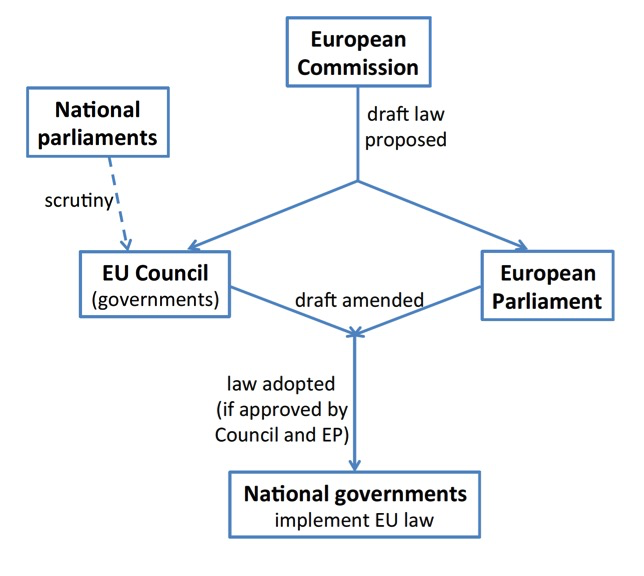 Approximately 50% of amendments proposed by the European Parliament become law. This is considerably higher than national parliaments in their national legislative processes. At the national level, governments usually control a majority of seats in their parliament, and can force their MPs to vote through proposed laws; as a result, governments are rarely defeated. In Brussels, in contrast, neither the Commission nor the governments in the Council can rely on a ‘governing majority’ in the European Parliament or force the MEPs to vote a particular way. As a result, coalitions have to be built issue-by-issue.

International agreements between the EU and third countries are subject to ratification by the European Parliament. The European Parliament cannot propose amendments, but has the power to veto an agreement. This is like the US Senate’s power to reject international treaties signed by the US President. For example, the Transatlantic Trade and Investment Partnership (TTIP) – a trade agreement currently being negotiated between the EU and the US – will be subject to a vote in the European Parliament. This power means that when negotiating trade agreements the Commission must take account of the views of the MEPs, especially those in the powerful International Trade committee.

The seven-year EU budget framework is negotiated by the member state governments and is then subject to an approval vote in the European Parliament. Within the overall spending limits of this multi-annual budget, each annual budget is adopted like EU legislation: with a proposal from the Commission and amendments by the Parliament and Council. This allows the European Parliament to propose minor changes to the budget.

Power 5: Election and Removal of the Commission

How the Parliament works: parties and committees

The European Parliament works like most other democratic parliaments, in that politics inside the institution are dominated by parties. The MEPs sit in cross national ‘political groups’. The groups and their strengths are shown in Figure 2 (the BBC also has a useful guide to the political groups).

The largest group is the centre-right European People’s Party, which brings together most mainstream centre-right parties, such as the German Christian Democrats and French Republicans. The second largest group is the centre-left Socialists and Democrats, which brings together the socialist, social democratic and labour parties, including the UK Labour Party. The British Conservatives left the EPP in 2009 to form a less pro-integrationist group: the European Conservatives and Reformists Group. UKIP MEPs sit in the EFDD (Europe of Freedom and Direct Democracy) group, together with similar Eurosceptic MEPs from several other member states. The UK Liberal Democrats sit in the centrist ALDE (Alliance of Liberals and Democrats for Europe) group, while the UK Greens, SNP and Plaid Cymru sit in the G/EFA (Greens/European Free Alliance) group.

The political groups dominate the work of the Parliament: controlling the political agenda, deciding which MEPs hold key positions, forming alliances before votes, and enforcing party discipline. Perhaps surprisingly, party ‘cohesion’ in recorded (roll-call) votes in the Parliament is almost as high as in the UK House of Commons and other national parliaments in Europe. For example, if all one knows about an MEP is to which political group she belongs, one can correctly predict which way she will vote almost 90% of the time!

The main reason party cohesion is so high, in addition to the powers of the groups, is that votes usually split along left-right lines.  Sometimes the two largest groups form a ‘grand coalition,’ but often a centre-left bloc votes against a centre-right bloc. When this happens, the centrist ALDE group is pivotal: able to form a winning majority either with the left (as usually happens on environmental and civil liberties issues) or with the right (as usually happens on market liberalisation issues). How each MEP votes in every vote, and the coalitions that form, can be tracked on VoteWatch.

Much of the legislative scrutiny and oversight is conducted in the parliament’s standing committees, which meet monthly in Brussels. In these MEPs propose amendments to draft legislation, which are then subject to a vote in the full plenary. The committees and their chairs are show in Table 2.  A committee chair is a powerful position, as these MEPs lead the negotiations with the Council and Commission when legislation is adopted in their policy area. 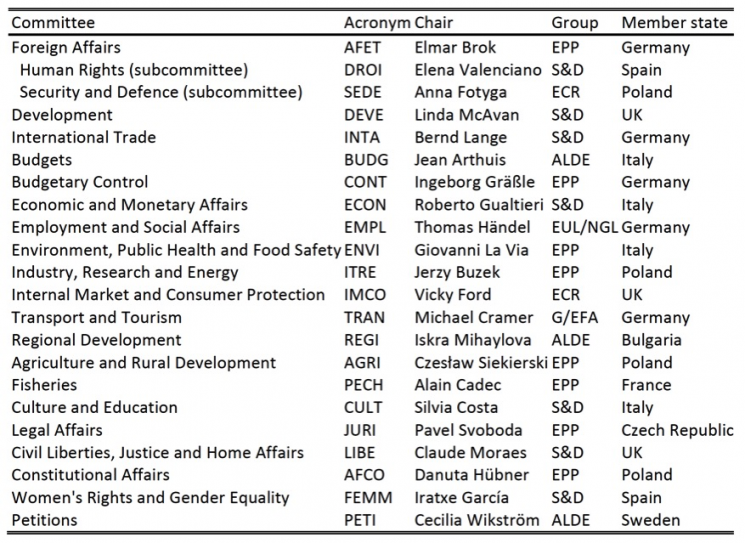 Inside the committees the other key MEPs are the rapporteurs. These are the MEPs who are chosen to write reports on draft legislation, which involves coordinating the amendments and shepherding the legislation through the Parliament. Key rapporteurships tend to be won by MEPs from the larger member states, including the UK.

The European Parliament also has a President, which is currently Martin Schulz, a German social democrat. The President chairs the plenary sessions and represents the Parliament externally, including in European Council meetings.

The MEPs shuttle backwards and forwards between Brussels (for committee and party meetings) and Strasbourg (for plenary sessions). This is hugely costly for EU taxpayers and has detrimental psychological effects on the MEPs themselves. Contrary to popular wisdom, though, this situation is not the fault of the European Parliament. Surveys show that most MEPs would prefer to make Brussels their permanent home. To end this situation, the EU treaty would need to be changed, which would require agreement of all 28 member state governments, and the French government would probably veto any such move.

History: from consultative assembly to co-legislator

Until 1979, Parliament was composed of national parliamentarians, who met monthly in Strasbourg. Since 1979 the MEPs have been ‘directly elected’ by the people every five years, in the same few days in all EU countries, most recently in May 2014.

Also, in the 1980s many MEPs were former national politicians, at the end of their national careers. This is no longer the case, as most MEPs now consciously choose a career in the European Parliament and try to stay in Brussels rather than return to national politics. As the powers of the Parliament have grown, the work of the MEPs has also grown: scrutinising draft laws, overseeing the Commission, meeting party colleagues in Brussels, speaking and voting in ‘plenary sessions’ in Strasbourg, and meeting constituents and interest groups at home.

Many expected that European Parliament elections would produce a new democratic mandate for the MEPs. After eight rounds of such elections, though, this has not happened, for two main reasons. First, turnout in these elections tends to be about 20% lower than in national elections, and has declined since 1979 – as the blue line in Figure 3 shows. Turnout has not declined as much in the nine countries that have participated in every election since 1979 (the green line): Belgium, Denmark, France, Germany, Ireland, Italy, Luxembourg, the Netherlands, and the UK. Also, turnout in the UK has actually increased slightly since 1979 (the red line).  Part of the explanation of the general downward trend, then, is that the EU has enlarged to countries, in Central and Eastern Europe, that have lower election turnout. 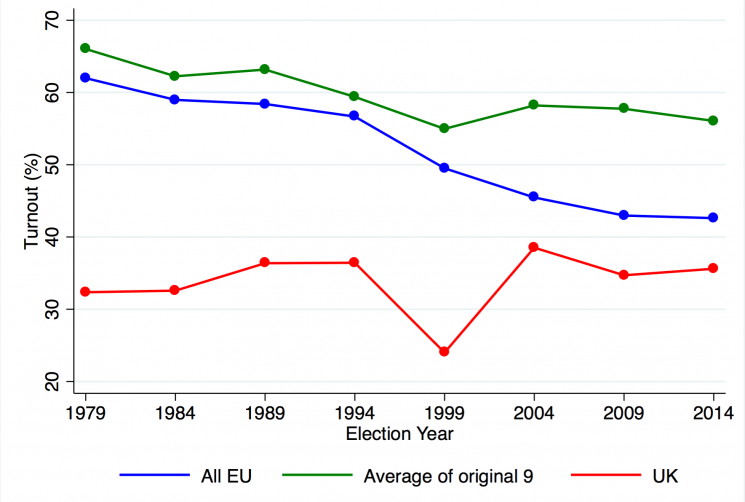 In an effort to inject a more ‘European’ element into the campaigns, before the 2014 elections the main European parties put forward ‘lead candidates’ (Spitzenkandidaten in German), with the idea that the lead candidate of the ‘winning’ Euro-party would become the Commission President. There were several live TV debates between these politicians, a significant increase in media coverage in many countries, and the lead candidate of the winning group – Jean-Claude Juncker (of the European People’s Party) – was then elected as the Commission President.  However, there was little media coverage in the UK, and most British voters could not engage with the contest because none of the candidates were supported by a major British party. Also, this process did not halt the decline in turnout, and radical right and left parties received more votes in 2014 than ever before. A big question remains, then, as to whether this was a one-off experiment, or whether a contest for the most powerful EU office will be a central feature of the 2019 elections.

Relations to national parliaments: from rivals to allies

In sum, because of the checks-and-balances in the EU, the European Parliament is more like the US Congress than the UK House of Commons. The main power of the House of Commons is to hold the government to account, with the ultimate weapon of being able to sack the government. Also, the House of Commons is more a debating chamber than a working legislative scrutiny chamber.  In contrast, the European Parliament – like Congress – cannot easily remove the executive (the Commission), and instead focuses on drafting and amending legislation. As a result, MEPs, like Congressmen, tend to become policy specialists, who focus their work in committees.

In terms of the overall impact of the European Parliament, the MEPs have in general used their powers effectively, to propose reasonable amendments, to oversee the Commission, and to stand up for consumers and citizens against ‘national industrial champions’, whose interests are often promoted by governments in the Council.

The big limitation, though, is that MEPs are not as legitimate as national MPs or US Congressmen and women. Few citizens know who their MEPs are, and European Parliament elections are still not fought on the record of the MEPs or the platforms of the European political parties. This ‘democratic deficit’ remains the main challenge facing the European Parliament.