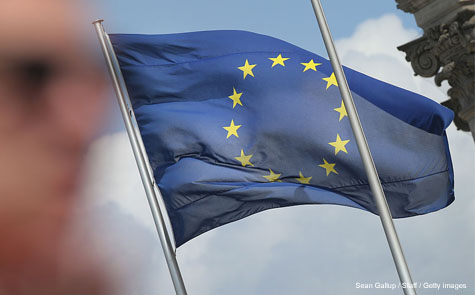 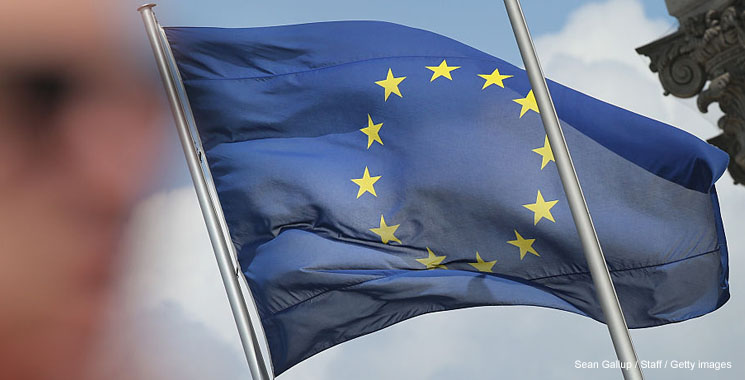 In addition to its main legislative bodies, the EU also has an array of agencies that contribute to EU policies in various ways.

How many EU agencies are there?

Six are so-called ‘executive agencies’. These implement and manage particular EU programmes, such as the Erasmus+ student and worker exchange programme, and are directly answerable to the European Commission.

A further three—the European Space Agency, the European Institute of Innovation & Technology and the Single Resolution Board—do not fall under executive or ‘decentralised’ agencies (see below).

What people normally refer to when they discuss EU agencies are the 34 so-called ‘decentralised agencies’. These make up the bulk of the total and are functionally independent of other EU institutions.

As the chart below shows, these agencies have expanded rapidly in number since the early 2000s.

This reflects several factors, including an expansion and deepening of EU action across a number of areas,  including justice and home affairs; a wider trend across administrations around the world to delegate some responsibilities to technical bodies; and an expansion in the number of EU member states, which has increased the monitoring and implementation demands on EU institutions. 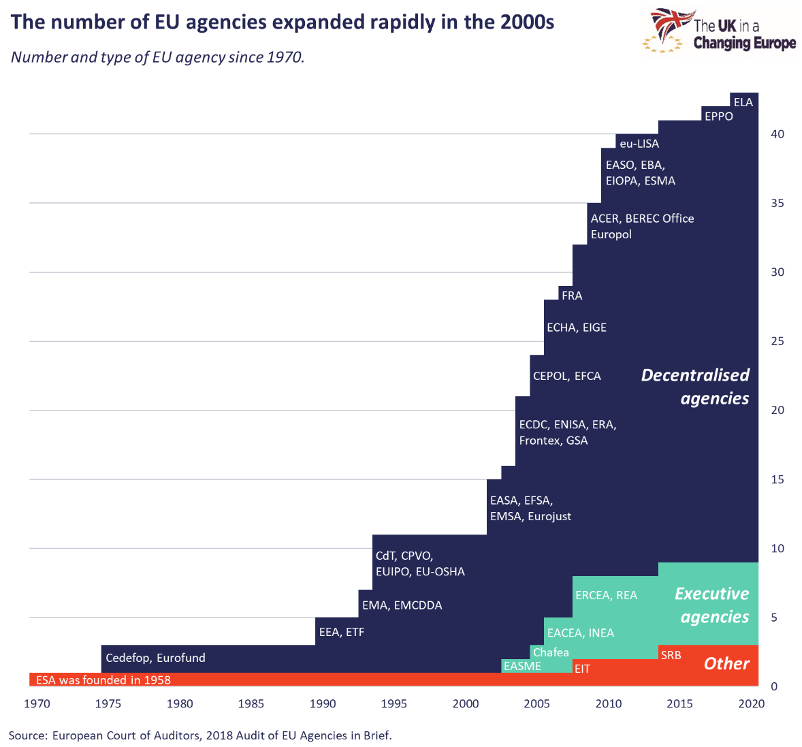 What do they do?

These agencies perform a range of regulatory, operational and policy-related tasks in particular sectors. They operate in aviation, banking, chemicals, environment, food safety, pharmaceuticals, policing and many other areas.

Broadly, they fall into three categories.

Regulatory agencies mainly monitor and ensure the enforcement of EU rules in a particular sector. These include the European Aviation Safety Authority (EASA), which ensures the safe operation of civil aviation in the EU.

It does things like provide safety certificates for aircraft and parts, as well as licenses for crew, among other things.

The European Medicines Agency (EMA) performs a similar role in pharmaceuticals, ensuring the safety and certification of medicines.

These include the security agencies, such as Europol, which gathers data on criminal activity, and the likes of the European Maritime Safety Agency (EMSA), which monitors maritime traffic, and provides support for the clean-up of pollution, such as oil spills.

Information agencies have few practical or enforcement responsibilities but instead focus on producing research and sharing information and data.

One of the most prominent during the coronavirus outbreak has been the European Centre for Disease Prevention and Control (ECDC), which collates and disseminates authoritative information on infectious diseases.

The European Environment Agency (EEA) performs a similar role, reporting on pollution levels and trends across the EU and other member countries.

How are they funded?

EU agencies generally get their income in two ways.

First, they receive funding directly from the EU budget. Second, many generate their own income by charging fees for the regulatory services that they provide.

Different agencies depend on different sources of income. For instance, the European Medicines Agency (EMA), which ensures that all medicines on the market in the EU are safe, generates most of its income from fees.

Europol, the EU’s crime agency, on the other hand, is funded almost entirely from the EU budget.

Like all EU bodies and institutions, the EU’s agencies are ultimately overseen by the European Court of Justice. That said, many do have internal boards of appeal that can be used as first recourse in case of dispute.

Can the UK participate in them after Brexit?

Theresa May envisaged UK participation in some EU agencies after Brexit. Boris Johnson’s government does not envisage participating in any regulatory agencies, as that would mean observing EU rules and being subject to the European Court of Justice.

The UK has said it will consider whether participating in some EU programmes like Erasmus offers value for money.

There are broadly two kinds of relationships that non-member states can have with these agencies.

First, participation agreements largely replicate the same benefits as for EU member states, albeit without voting rights in most cases.

They are generally open only to the countries that follow EU law, like the members of the European Economic Area (Norway, Iceland and Liechtenstein), or Switzerland.

In many cases, these countries can attend the management boards of the EU agencies they participate in, but they do not have decision-making powers.

Second, co-operation agreements are available to a wider spectrum of non-member states, but these tend not to be legally binding and generally limited to the exchange of information and expertise.

The exceptions are agreements with the EU’s financial services agencies, such as the European Securities and Markets Authority (ESMA), where recognition by the EU of domestic standards as equivalent to its own is a prerequisite.

If the UK participated in EU agencies, would it have to pay?

Any UK contribution would have to be negotiated, but generally contributions reflect the relative size of a country’s economy.

EEA countries’ contribution is calculated as proportionate to each country’s share of its domestic economy and the EU economy combined.

The size of each agency’s budget is decided by the EU institutions and member states through discussions over the EU’s long-term and annual budgets.

Therefore, participating countries do not control the size of their contributions, albeit they remain relatively small.

Any UK contribution would be substantially higher than that of EEA countries, given its economy is more than six times bigger.

But this would still be small relative to overall UK government spending and the UK will incur the costs of having to set up these functions domestically anyway, which may come at a greater cost than pooling resources with EU and other countries.