What does a level playing field mean? 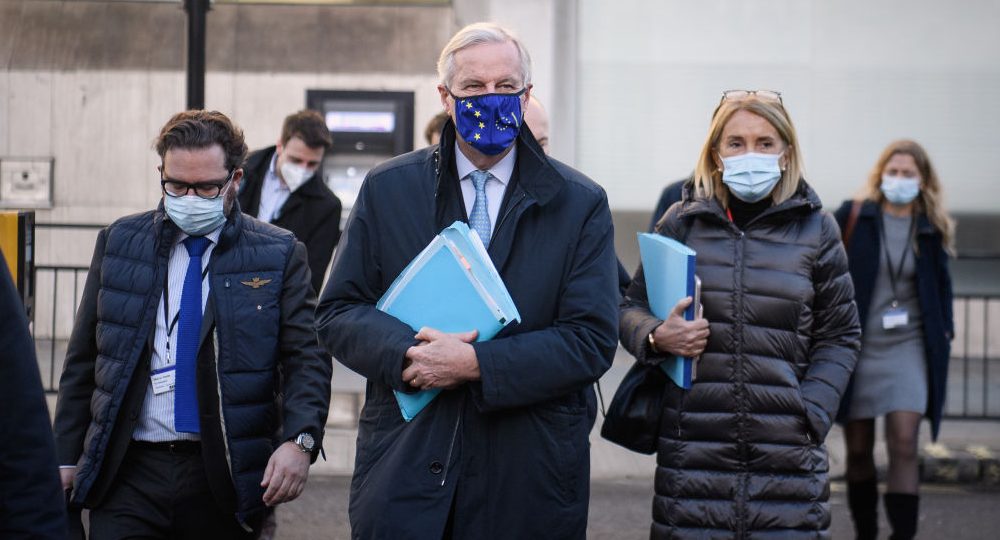 What is a level playing field?

Level playing field rules are designed to ensure that firms making the same products can compete on a fair basis because they operate to similar rules that can affect their costs.

These are not about product standards but about other rules like environmental regulations, labour laws and the ways in which governments can support businesses through subsidies or favourable tax treatment.

These are a feature of integrated markets like the EU’s single market, but they also feature to some extent in free trade agreements.

What does that mean in practice?

As in sport, if the playing field is on a slope, one team will enjoy an advantage over the other. It is the same idea when we use the term ‘level playing field’ in the context of international trade.

In free trade agreements, there are many rules governing product standards. These set limits on potentially harmful chemicals, regulate ingredients in food, and so on.

To protect consumers, these rules must be followed by all firms if their products are to be sold in the countries covered by the trade relationship.

For example, imagine two firms producing widgets in neighbouring countries A and B. The raw materials needed are the same, and so that element of the production cost is the same (more or less) for both.

But now imagine that labour laws in country A make it easier for firms to employ agency workers at a lower rate of pay than permanent staff; or that environmental regulations are less stringent, so firms need not spend so much ensuring their production processes are not polluting the environment.

For both reasons, the firms in country A will enjoy an unfair advantage over country B – the playing field will be tipped in their favour. They will be able to sell the finished product at lower price, thus undercutting their competitors from country B.

Another area – and one that is getting a great deal of attention in the context of the UK-EU talks – is state aid and competition policy.

Again, to understand this we need to make another shift, this time away from (the costs of) production and towards the general state of the competitive environment firms operate in.

Back to our widget-producing firms in the two neighbouring countries. This time, health and safety law, employment practices, environmental rules and so on are all harmonised and so the same rules apply in countries A and B; but now, firms in country A are eligible for some sort of support from the government.

This could be a subsidy (for example the government provides cash grants to support a sector or a region, or it subsidises the cost of a key raw material), or it could be a tax break (selectively reducing corporation tax for a given sector, for example).

Or it might be that the government sets competition policy (for example on mergers or takeovers, or on blocking foreign firms from entering a certain industry) in such a way as to protect existing firms.

To get round these problems, level playing field rules are put into FTAs. They’re designed to harmonise a wide range of what you might call ‘ancillary’ costs, so that all firms can really compete on is quality at a price (whether it is the quality of raw materials, the design, the final product or of after-sales services).

Why is it an issue in the Brexit negotiations?

The EU wants to ensure that if the UK has tariff-free access to the single market it does not lighten the burden of regulation on its firms, or subsidise them in a way that EU rules would not allow, which would help them to undercut EU businesses.

The UK argues that the EU is trying to keep the UK in its regulatory regime, which runs counter to the whole point of Brexit.

What are the main issues in the negotiations?

On social and environmental protection, the EU wants clauses that ensure both that the UK does not row back from the levels of protection in force at the end of the transition period (the EU standards that are now in UK law) but also wants agreement to a ‘ratchet’ so that neither side can reduce standards if either raises them in the future.

On state aid, the EU’s starting point was more demanding. It sought dynamic alignment with EU rules so that the UK would continue to apply the EU regime in perpetuity.

On tax, the EU sought several commitments on transparency.

The EU wanted all of this to be subject to formal dispute resolution, with the ECJ being asked to interpret any issues of EU law.

The UK on the other hand rejected these obligations, arguing these were not present in other FTAs that the EU had negotiated, which contained only commitments to recognise international commitments. It also argued that they should be subject to consultation but not dispute resolution.

Below is a summary of the main terms used when discussing level playing field issues in the talks between the UK and the EU. Collectively, they are seen as a means to ensure fair competition for companies on both sides.

Non-regression is the idea that different parties to a trade agreement commit in future to at least maintaining their current level of regulatory standards on things like labour law and environmental protection. This is to avoid either side reducing standards to gain competitive advantage.

In the UK-EU trade talks, regulatory standards have been at the heart of discussions. The UK has indicated that it is prepared to accept non-regression from the environmental and social protection standards in place at the end of the transition period.

What is a ratchet clause?

A ratchet clause refers to a commitment in a trade agreement that locks in any future increase in regulatory standards. It can work in a number of ways: either, when both sides raise their standards, those set a new floor below which neither side can regress without sanctions; or, if one side moves, the other is obliged to raise its standards to a similar level.

The consequence of failing to abide by the conditions of the ratchet can leave the offending party liable to penalties from the other in the shape of tariffs or other forms of reduced market access. The EU has proposed a ratchet clause at various stages in the negotiations with the UK to allow their regulatory environments to ‘evolve’.

In trade, remedies are the measures – such as fines or tariffs – that a signatory to an agreement can use to retaliate should another party break (or be perceived to break) its commitments. In the UK-EU talks, the use of remedies has been an important issue.

Initially, the EU wanted to be able to impose unilateral (or ‘autonomous’) measures against the UK for breaking any commitments without having to go through a cumbersome dispute settlement process.

This was to allow the EU to respond quickly to any changes in UK regulatory standards that might result in unfair competition. An alternative is for remedies to be imposed only after some sort of independent dispute resolution process.

What is dynamic alignment?

Dynamic alignment is the idea that parties to a trade agreement maintain equivalent regulatory standards to each other in future. If one increases its standards, others do so in parallel. Initially, the EU wanted the UK to sign up to dynamic alignment with EU state aid rules.

The UK rejected this approach as unjustifiably limiting its future regulatory freedom. Instead, non-regression and a so-called ratchet clause have been the basis for discussions to ensure fair competition in future.

Cross-retaliation refers to the idea that parties to a trade agreement can take retaliatory action, such as implementing tariffs, in areas not directly related to those in which a breach might have taken place.

For instance, in the UK-EU talks, the EU wanted to be able to take action in areas such as market access for UK goods if the UK took unwarranted action in, say, fisheries. By contrast, the UK argued each issue should be dealt with in isolation, so that, for example, a fisheries violation could only be retaliated against in the area of fisheries.

What is a dispute resolution process?

Dispute resolution is the mutually agreed process by which disagreements over the interpretation, application or breach of a trade agreement can be resolved between parties. These processes are designed to provide clarity about what action either side can legitimately take in the event that a dispute arises.

Most often, this involves formal procedures for dialogue to take place, before eventually being escalated to independent arbitration. Often in trade agreements, dispute resolution processes are slow and cumbersome.

In the UK-EU talks, the EU initially wanted to be able to impose unilateral (or ‘autonomous’) measures against the UK for breaking any commitments without having to go through such a cumbersome process. The UK did not accept this idea. Trade agreements also include clauses by which either side can terminate an agreement, usually with at least several months’ notice.

By Dr John Paul Salter, researcher at the UK in a Changing Europe and teaching fellow in Public Policy & Management at University College London