Fear and loathing in the French election 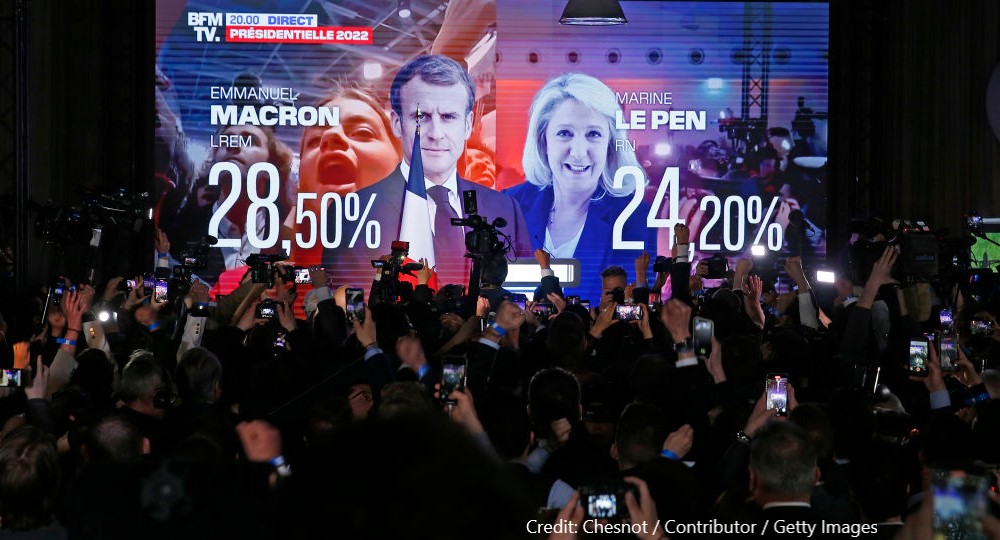 At first sight, Sunday’s French Presidential election result appears a near carbon copy of the result five years ago. Emmanuel Macron finished a handful of points ahead of Marine Le Pen, with the left-wing Jean-Luc Mélenchon once again coming a close third.

That means another run-off between Macron and Le Pen. Yet this time the race will be much closer. Most polls currently project Macron will win by a whisker. Dig beneath the surface of Sunday’s results and there lies a French electorate more fractured and disillusioned than it was five years ago.

In 2017 Macron appealed successfully to the ‘republican front’ – a tacit alliance between voters of left and right to keep Le Pen out of power. Jacques Chirac had done the same to Le Pen (père) from the Presidential palace in 2002, Third time, however, might not be so lucky.

For one thing, Macron is no longer a novelty. Indeed, he has overseen a tumultuous five years, defined to an extent by opposition on the streets. ‘Yellow vest’ protests – which started in 2018 in response to rising petrol prices – have been widespread and there has also been public opposition to lockdown restrictions and obligatory health passes.

Many on the left have also been disappointed with the liberal economic agenda (tax cuts, planned pension age increase) of the man they call ‘the President of the rich’.

And, to compound matters, the President’s campaign has been weak, and short, which has hardly helped combat a perception that he is arrogant and out of touch. Consequently, fewer voters are willing to given him the benefit of the doubt this time.

Moreover, perceptions of Marine Le Pen are changing too. She has gone out of her way to present herself as a more moderate, palatable choice – changing her party’s name and ditching radical calls for ‘Frexit’ in favour of greater French autonomy over economic and immigration policy. On the campaign trail, anti-immigration tirades have been traded for selfies and soft-peddle interviews.

The first round result shows she has not significantly enlarged her base as a result, but more voters seem to consider her a potential option in the second round.

Her rebrand has been considerably assisted by the rise of Eric Zemmour. His repetition of racist conspiracies has made Le Pen seem positively moderate, and Zemmour’s popularity in the wealthiest Paris suburbs has help extend the reach of the far right as a whole.

Zemmour and Nicolas Dupont-Aignan – who, between them, took 9% of the vote – have called on their supporters to now vote for Le Pen. Although she will not sweep up every one of those votes, in crude terms she has 32% of the second round vote in the bag while endorsements for Macron take him to 41%.

And so, the race will hinge on the votes of the 22% who voted for Jean-Luc Mélenchon, the far-left candidate committed to economic redistribution, withdrawal from NATO, and radical action to tackle climate change.

As in 2017, Mélenchon has cautioned his supporters against voting Le Pen (while not endorsing Macron). However, they seem less likely to heed his warning for a second time. In 2017, 52% of Mélenchon voters opted for Macron – only 7% transferred to Le Pen. This time, depending on which poll you read, they split 20-27% for Le Pen and 36-43% for Macron.

Partly, this reflects a section of Mélenchon’s support (older, working class) which is receptive to Le Pen’s attacks on globalisation and her emphasis on the cost-of-living crisis (the number one issue for French voters) through proposals such as a 70% VAT cut on fuel, gas and electricity. Yet a number of voters also seem to have decided that Le Pen simply cannot be any worse than Macron. The status quo is no longer as alluring as it once was.

Macron, too, will make appeals to Mélenchon voters. He has promised to develop his programme to address ‘anger and despair’. Yet it is hard to see how he can make that case convincingly in 14 days. He has also said he is willing to compromise on plans to raise the retirement age from 62 to 65 – a key point of attack for Le Pen – yet lowering it to 64 or phasing it in more slowly may not be enough.

Macron’s best bet is probably to convince wavering voters of the need to keep the far right out of power. 20% of first-round voters are undecided, meaning there is still much to play for. It is one thing to tell a pollster you’d rather abstain than vote Macron, but it is something else to stay home on polling day and increase the chance of a Le Pen victory.

To get voters out, Macron will need to convince them that France will be even more divided and insecure under Le Pen. He might point to her proposals to ban the headscarf in public, her historic links to Russian money and Vladimir Putin, environmental policies which would blow up the path to net zero, and EU policies which risk damaging the French economy and isolating it internationally.

In a race defined by disillusion and dissent Macron’s task is to rally the anti-Le Pen cause, making the case that beneath her new sheep’s clothing lurks the same old wolf.