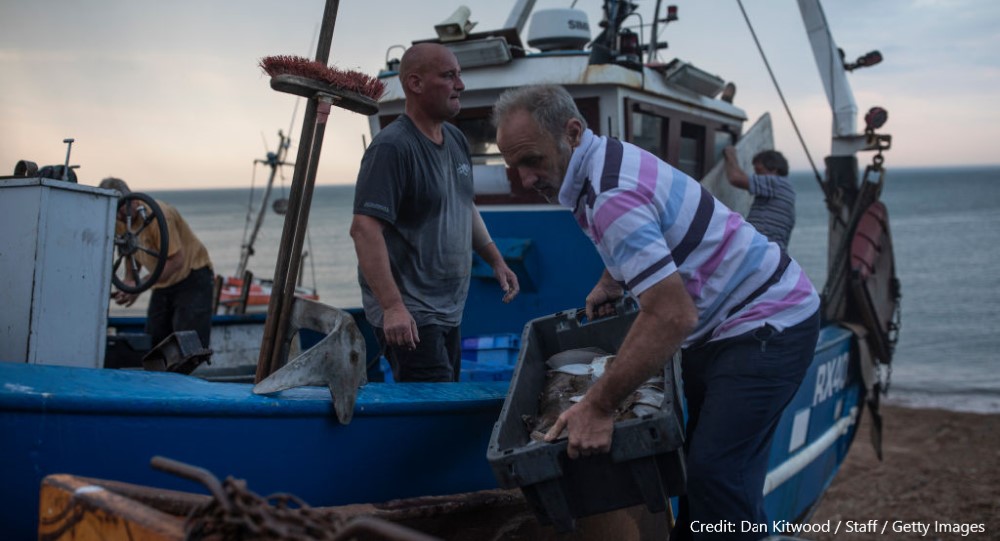 Let’s imagine a no deal situation. The UK regains full control over its waters and fisheries on 1 January 2021. There is no formal agreement to give EU boats access. A triumph for UK fishers, the Prime Minister proclaims.

UK boats have the run of late-season mackerel in January – a species for which UK boats typically catch all their quota (EU boats catch around 40% of the total).

By the next Mackerel season in October, they would be free of EU quotas and able to catch much of the fish that would have gone to EU vessels. The newspapers would be full of newly reclaimed British fish spilling in the holds of British boats.

But there’d be an immediate snag.

More than two-thirds of UK mackerel is exported, most to the EU, with a third going to the Netherlands alone. British mackerel would suddenly face a 15% EU tariff, making it much more expensive.

The UK provides a substantial amount of EU mackerel (around 11%), and some EU buyers may be left with little choice at short notice but to buy expensive British fish, especially given many EU27 boats would not have access to mackerel in UK waters. But many will look elsewhere.

If they do, the UK market could find itself with a mackerel mountain. The species accounts for just 3% of fish eaten by UK consumers. So where’s all of this newly British caught fish going to go? Much could be left to rot.

We could see a similar story from May onwards with the catching season for herring – a species that British consumers barely eat at all. The UK supplies around 5% of EU herring, which would also face a 15% tariff from mid-June until the end of the year (almost all herring is caught June-September).

These two species account for over half of fish caught by UK boats, and yet UK consumers hardly eat them. Would this be a triumph for UK fishers?

Well, only if they can sell them, and access to their main market would be much less favourable. And if this fish cannot be sold profitably, there would be little point going to the extra effort to catch it. In simple terms, no deal would mean more fish but fewer buyers.

There are also a few species for which the UK benefits from access to EU waters: in 2019, more than 80% of blue whiting came from Irish waters and a fifth of UK caught scallops came from French waters. Lack of access works both ways.

But it is not just the UK that has been sabre-rattling, the EU side have been at it too. France’s Europe minister recently revived a classic of the Brexit genre: ‘A bad deal would be the worst outcome. And so we are ready for a no-deal scenario, and we will not accept a bad compromise.’

Sound familiar? It turns out no deal is better than a bad deal after all.

Except that it’s nonsense. No deal could mean EU boats losing access to UK waters overnight. There’s no wonder the French are exercised. French boats would be worst affected. They catch a third of the fish by EU boats in UK waters by value, followed by Danish (19%), Dutch (16%) and Irish (14%) vessels.

In total, EU boats catch just over 40% of the fish by value in UK waters, worth around £500 million. Not a big number economy-wide, but substantial for individual fishers. That equates to around 8% of total EU fish caught by value that could be lost overnight.

But it’s not just a lack of access that ought to trouble the EU side, and France especially, but access to UK supply. According to data from the European Market Observatory for Fisheries and Aquaculture Products (EUMOFA), in 2019 the UK provided around eight per cent of fish imports into the EU by weight. (For comparison, Norway accounted for 26%.)

However, the UK is particularly important for some member states. Some 64% of Irish fish imports come from (or at least through) the UK, and it is 26% for France and 12% for the Netherlands. If they want to keep buying UK fish without a deal, it will come with a substantial tariff. In simple terms for the EU, no deal would mean less fish and higher prices.

What this amounts to is an absurd debate. It is counterproductive for UK vessels to catch more fish if access to their main market is made more difficult. And EU vessels need a deal for any access, as well as a continued supply of UK fish at cheaper prices.

But it is even more absurd when, as the EU has stated, any wider agreement also rests on reaching a deal on fish: trawl or nothing. If either side thinks they can do without a deal on fish, they ought to be slapped around the face with a wet one.