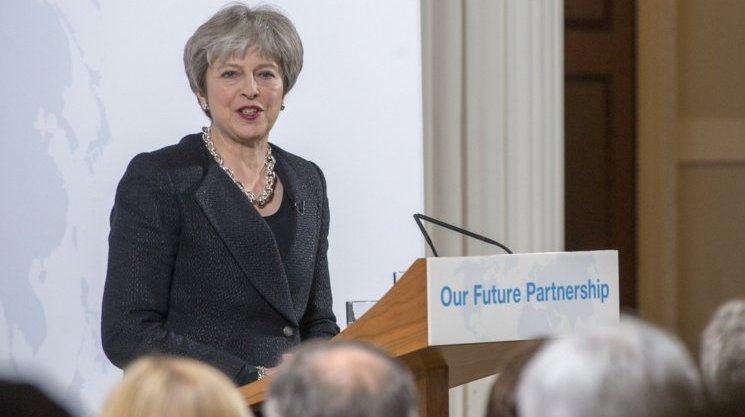 The Prime Minister has set out her five tests that will guide the UK government in negotiations with the EU. Five things that she said are particularly consequential from a Northern Ireland perspective.

In the wake of the publication of the European Commission’s draft legal text on the Withdrawal Agreement, passions ran high in some quarters over perceived EU attempts to ‘annex’ Northern Ireland, undermining the constitutional integrity of the UK.

Theresa May repeated her personal commitment that no deal with the EU can be allowed to threaten the Union between Northern Ireland and Great Britain. “Just as it would be unacceptable to go back to a hard border between Northern Ireland and Ireland,” she declared, “it would also be unacceptable to break up the United Kingdom’s own common market by creating a customs and regulatory border down the Irish Sea.”

Unionist nerves will be assuaged.

2. “I have consistently put upholding the Belfast Agreement at the heart of the UK’s approach.”

A succession of public attacks on the Good Friday Agreement by prominent Brexiteers, from Dan Hannan to Kate Hoey, prompted concerns that efforts were at play to delegitimise the UK’s commitments under the Agreement.

Former prime ministers Tony Blair and Sir John Major both had warned of the potential for Brexit to destabilise the peace process in Northern Ireland – echoing their interventions before the referendum in 2016.

By repeating the UK’s obligations under the Good Friday Agreement, the Prime Minister recognised the role of her predecessors – and Northern Ireland’s own parties.

“Successive British governments have worked tirelessly – together with all the parties in Northern Ireland and with the Irish Government – to bring about the historic achievement of peace,” Theresa May acknowledged.

“This is an achievement that we should all be proud of, and protect,” she said, in a clear effort to distance herself from those playing down the significance of the Agreement to the peace process.

It was a striking rebuke.

3. “We chose to leave; we have a responsibility to help find a solution.”

Some had called on Theresa May to call the EU’s bluff. Pressed to come up with practical ways of avoiding a hard border on the island of Ireland, a popular refrain had been to argue that it would be the EU’s fault if physical checks were made.

Adopting a conciliatory tone, the Prime Minister dismissed this approach: “It is not good enough to say, ‘We won’t introduce a hard border; if the EU forces Ireland to do it, that’s down to them’. We chose to leave; we have a responsibility to help find a solution,” she affirmed.

“But we can’t do it on our own,” she admitted. “It is for all of us to work together.” Attempting to defuse the rhetoric from within her own party, as well as from senior members of the Democratic Unionist Party, Theresa May is calling for constructive efforts to prevail – from both sides.

By extension, the Prime Minister is asking the Taoiseach and EU to share the responsibility to avoid a hard border. If it doesn’t work whose fault will it be? ‘Not just mine’, indicates Theresa May.

4. “Recognising the unique circumstances in Northern Ireland, and our shared commitments to avoiding a hard border, we should consider further specific measures.”

This is where a significant degree of imagination will be required on the EU’s part if Theresa May’s approach is to succeed. She repeated calls for no restrictions on micro, small and medium sized business trading along the Irish border, accounting for 80% of North-South trade. For larger traders, she called for a “trusted trader scheme” to facilitate “streamlined processes … consistent with our commitments.”

Such ideas haven’t gotten very far with Brussels in the past. Technological solutions to facilitate a ‘Smart Border’ in Ireland have been dismissed as untested or impractical.

Theresa May is aware of the existing scepticism, recognising “that some of these ideas depend on technology, robust systems to ensure trust and confidence, as well as goodwill.” But, crucially, she added: “they are serious and merit consideration by all sides.”

This goes back to the previous point: the Prime Minister clearly wants greater flexibility and cooperation from the EU side, particularly from the Irish government. Will this require simply good faith, or will it require a leap of faith?

5. “We both need to face the fact that this is a negotiation and neither of us can have exactly what we want.”

The EU has previously insisted that only an ‘off-the-shelf’ model is a realistic basis for a future trade deal with the UK. However, Theresa May pointed out that the EU itself is taking a “tailored approach” by accepting that no precedents exist when it comes to certain sectors, notably fisheries.

The Prime Minister, therefore, dismissed suggestions that the UK was “cherry-picking” in its wish list for a future relationship, noting that, “every free trade agreement has varying market access depending on the respective interests of the countries involved. If this is cherry-picking, then every trade arrangement is cherry-picking.”

Instead, she emphasised that the UK wanted a certain level of access to the single market, but that it would be prepared to meet the “obligations” balanced against the UK’s desired outcomes.

If enough similarity remains to negate the need for any border checks at all then it begs the question: why leave if the power gained by leaving is never going to be used? Does this amount to Brexit in name only?

If not, with Parliament ultimately possessing the sovereignty to diverge from regulatory alignment in due course, does this sufficiently ‘future-proof’ the avoidance of a hard border in Ireland, as well as a potential border in the Irish Sea? A generous interpretation of the Prime Minister’s speech is that it marks a shift towards pragmatism.

A less generous interpretation is that it kicks many of the current issues, including that of the Irish border, further down the road.