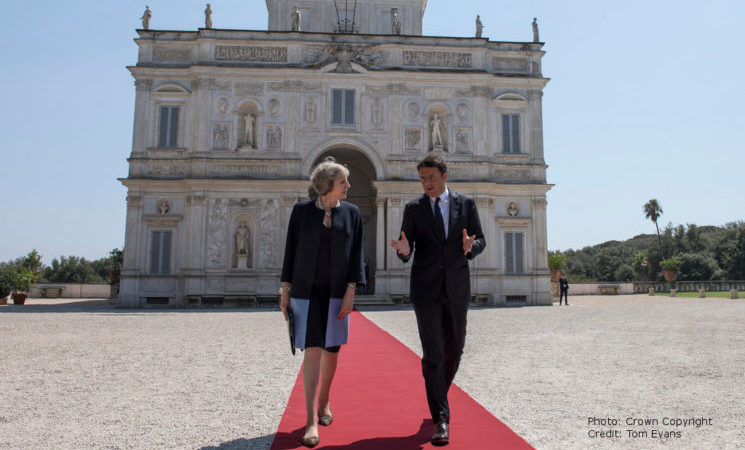 In less than a month after entering Downing Street Theresa May has made flying trips to see heads of five European governments that will have a vote on the European Union’s relationship with the United Kingdom once it leaves the Union.  More trips will be in the offing, as 27 EU member states will be setting terms for future EU-UK relations.

Meeting other national leaders who the prime minister must negotiate with is desirable. But as Theresa May’s abrupt entry to Downing Street shows, personal relationships with party leaders can be fleeting. In all member states holding office in other member states depends on decisions of national electorates, not friendship with foreign politicians. Before Theresa May invokes Article 50 to exit the European Union 24 months later, a number of people on her visiting list will be out of office. Nor can she meet non-socialist party leaders through the European People’s Party, the largest group in the European Parliament, which will also influence the UK’s post-exit position. David Cameron pulled the Conservatives from the EPP to appease Conservative Eurosceptics at the start of their campaign leading to Brexit.

The Prime Minister of Italy, Matteo Renzi, has put his office on the line this October in a referendum on centralizing power in his hands. If he fails to win, there may be a different Italian at the European Council meeting in December. The European priority for any Italian prime minister is to secure approval from the eurozone as well as from Italian interests for a restructuring of Italian banks to avoid their collapse. This will take all the domestic and European capital that Renzi can muster.

Whilst the French President François Hollande will remain in office until next May, he will be doing well to finish second in the first ballot of that month’s presidential election. Doing so would place him in a position to win re-election as the only alternative to Marine Le Pen of the National Front. The bigger the vote for Le Pen the more it encourages hard core Eurosceptics in the Conservative Party to argue that being more anti-immigration and anti-Brussels is a good way to win more votes.

The German Chancellor Angela Merkel is respected as a power broker in Europe and courted as a friend of Britain. In keeping with the traditional British belief that leaders can seal a deal, in Westminster there is a hope its problems in Europe can be resolved if it ‘lets Angie do it’. However, this assumes that she will still have the same hausmacht (clout) in Germany and in Europe for the next few years.

As every follower of German politics knows, Angela Merkel’s decision to open the country’s borders to more than a million Middle Eastern refugees has undermined her chances of being the authoritative head of German government after the national election in October 2017. Well before UK negotiations with the EU reach a critical point Angela Merkel will be fighting for her political survival. Martin Schulz, the German Social Democratic President of the European Parliament, speaks for many German politicians who are unsympathetic to bending or breaking EU principles for the sake of a British Conservative prime minister.

Up to a point Theresa May’s government shares the scepticism of Polish political leaders that she met in Warsaw; both groups dislike the idea of the EU gaining more powers. However, Polish leaders are not contemplating Polxit (Polish exit from the EU). They remain fully committed to a having a seat in a European Council that may be used to keep German power in check. Moreover, Poland has a national interest in the free movement of people within the single European market; hundreds of thousands of Polish residents in the UK have exercised this right. Any British attempt to restrict such movement would require European Council approval by Poland and many other benefiting states An EU migration policy anathema to Brexiters will be the policy of the Polish government whoever heads it.

To save the British taxpayer the cost of investing in European travel to meet fleeting European leaders, Downing Street needs to do three things. First, it should pay more attention to domestic political pressures in 27 EU member states; a majority are likely to have a general election before the UK leaves the EU. Secondly, it should identify those prime ministers who are more and less likely to be in office when negotiations about the terms of Brexit reach a climax at some point in 2018. Last, but not least, it needs to identify red line principles that are in the national interest of key EU member states. Agreeable or not, these will be critical in reaching a compromise agreement on Britain’s place in Europe once it is outside the EU.

By Professor Richard Rose, a UK in a Changing Europe commissioning fund awardee and director of the Centre for the Study of Public Policy at the university of Strathclyde Glasgow.