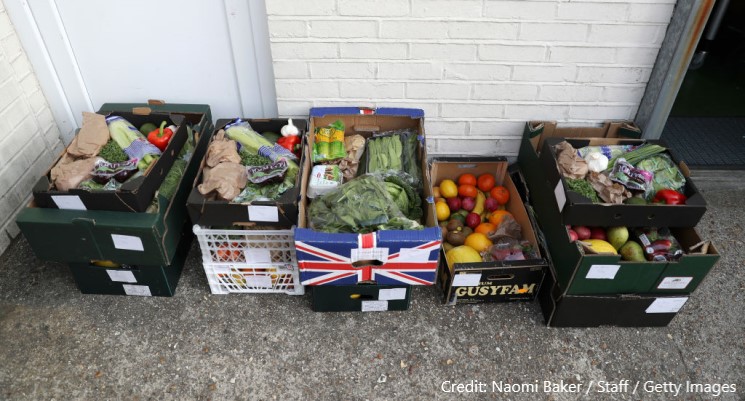 From Wuhan’s ‘wet’ market to the unprecedented spike in online grocery shopping, food has been at the core of the Covid-19 pandemic. Lockdown in the UK, as elsewhere, has also meant socio-economic slow-down.

These twin factors are putting into sharp relief the fraught and changing relationship between the private and the public in our current food system – including supermarket power, the expansion of the gig economy into the food sector, and the accompanying transformation of the urban fabric of UK towns and cities.

Some of these trends clearly pre-date Brexit but, as we recently argued in a special issue of The Political Quarterly, departure from the EU will likely accelerate some of these tendencies whilst strengthening the power of markets – a political direction opposite to that being taken in response to Covid-19.

The worries that supermarkets had about Brexit centred on the disruption of the complex just-in-time supply chains on which they have come to depend.

The fragility of that system was shown up by the shortages of key goods during the ‘stockpiling’ rush that began about four weeks ago, and it is chilling to think how such bottlenecks might build up under a ‘no deal’ scenario at the end of the transition period, and a move to trading on WTO rules.

But Covid-19 has also revealed exactly how dependent we have become on the physical space of the supermarket for the acquisition of food – delivery capacity falls very far short of the demand that has grown in the past month, and most people are buying their food in person at one of the ‘big four’ – Tesco, Sainsbury’s, Asda and Morrisons.

The supermarkets are presenting themselves as national champions in this crisis, and it is worth noting the degree of autonomy they have seemed to exercise on deciding price caps, limiting the number of goods per customer, or the exact implementation of the social-distancing guidance.

If we scale up the issue dramatically, connections need to be made between the low-cost, high-carbon footprint supermarket consumption model and the intensive global food production chains which may be contributing significantly to the rise of diseases like Covid-19.

The hour-glass pattern that characterises the global food regime – with its corporate concentration of intermediate retailers and input providers – goes a long way into explaining how we got here in the first place.

In the aftermath of Covid-19, there is every possibility that the supermarkets will use the central role they have played in pushing for even greater de-regulation and expansion, particularly if it is the case that the UK experiences a de facto hard Brexit in January 2021, when the supermarkets will be compelled to completely revamp their supply chains.

Such a move would also severely impact other public spaces of consumption that, unlike the supermarkets, have not remained open during the lock-down – restaurants, pubs, bars, cafes. On the face of it, chains like Wetherspoon would seem to be in a better position to weather the storm than small independents.

But the Covid-19 crisis should give us reason to pause and question whether these are the kinds of ‘public’ arenas that we really want to encourage in our society – spaces that promote loneliness in the crowd rather than the forms of solidaristic public engagement needed at times of emergency.

Something similar could be said of food-to-go aggregators like UberEats and Deliveroo, whose precarious, poorly paid and hyper-monitored riders have – together with comparable sections of the food workforce – suddenly acquired ‘key worker’ status.

Californian platforms have in the past few years aggressively invested in the UK’s fast food sector, aiming to capture data and therefore markets through apps that lock in home, student or workplace diners.

From the upstream ‘ghost’ kitchens cooking from branded restaurant menus in peripheral industrial estates, to just-in-time home delivery, fast food platforms seek a vertical integration which reduces food consumption to a transactional – and eventually, automated – exchange between client and kitchen, directly mediated through a private app and ‘self-employed’ riders.

However, fast food platforms are not restaurateurs, and do not seek to train and apprentice staff into the hospitality trade, nor to contribute to high-street footfall by managing bricks-and-mortar eateries. Neither, despite claims to the contrary, is the core component of their business model to foster small, local cafes and restaurants.

One social consequence of all this is the growing displacement of public eating (with others, as part of a daily routine) to lunching al desko (alone in the office, or in a room of one’s own).

The other is the seemingly unstoppable reshaping of urban Britain as public life in town centres is hollowed out, and gig economy workers return from unsociable shifts in central business districts to cramped houses of multiple occupancy in city outskirts with poor public infrastructure.

Yet the coronavirus shutdown and its accompanying government grants securing a basic income for all furloughed workers has starved aggregators like Deliveroo of both labour and large ‘anchor tenants’ like McDonald’s, who act as the chief sources of order volume.

The public health emergency has thus exposed how reliant fast food platforms are on capturing a lucrative market of urban eaters who daily consume millions of meals outside the home precisely because there is a public life and infrastructure.

It is taking a global pandemic to underline how crucial public institutions are to social survival, and how geographical proximity can act as proxy for collective welfare.

Corner shops and neighbourhood grocery stores are proving critical for the needs of the most vulnerable in the community; local on-street restaurants are repurposing their skills and stoves to feed nearby NHS workers and the homeless.

Whenever the public health emergency subsides, our food system – and in particular how our towns and cities are provisioned, fed and cleared up – must again become the focus of intense political scrutiny.

Brexit has rightly raised concerns surrounding supply chains, food standards and market regulation, but it is the virus that is showing how the demand-side of the food system is also open to political change, regardless of whether this happens inside or outside the EU.

Covid-19 has demonstrated that when it comes to food, local, regional and global scales are deeply intertwined, and that we cannot afford to keep prioritising cheap over nutritious; quantity over quality; choice over responsibility; convenience over need.

By Alejandro Colas, professor of International Relations, and Jason Edwards, lecturer in Politics, both Birkbeck University.