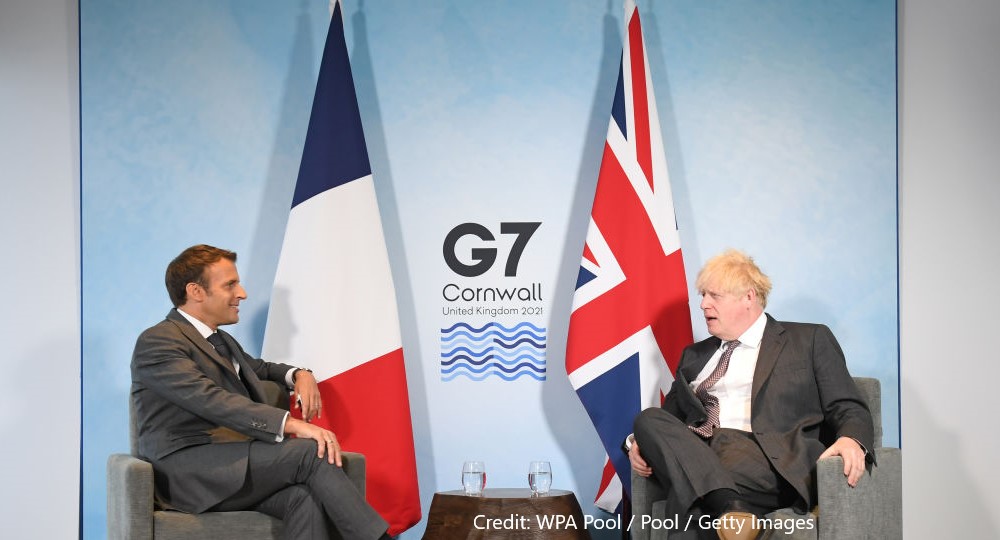 Franco-British relations can fairly lay claim to hosting the longest national rivalry in the world.

It was almost inevitable that these two nation-states, both self-consciously committed to national greatness since the early modern period, would define themselves against each other. For centuries, they fought wars, made alliances, eyed each other enviously, and sometimes tried to emulate each other.

But this extraordinarily rich history can make it difficult to separate the rhetoric from the parody. Take, for example, Jacob Rees-Mogg’s tweet in November 2021, in which he claimed that the French naturally get grumpy in October because they are still smarting over Trafalgar and Agincourt. On one level, this is nonsense; the vast majority of French people today do not think about Trafalgar and Agincourt at all. And yet there is a grain of truth here: the fear of defeat and déclassement have loomed over French politics since World War Two.

Or take Emmanuel Macron’s comment, during a press conference to mark the beginning of the French presidency of the EU, that the British ‘don’t do what they say’. Yes, a blanket statement of this kind is an oversimplification, but this is exactly what generations of French politicians and diplomats have felt when the British have ignored agreements and treaties that were designed to constrain them.

So how should we understand the deterioration in relations between the two countries in recent years? To answer this question, we need to look at the Franco-British story through three overlapping historical lenses.

The long view: a history of distrust

When it comes to Franco-British relations, the weight of the past matters. While historians and commentators have often emphasised their sociological and economic similarities, the two nations embody different political, cultural, legal, and educational systems. And it is the latter that have shaped their respective diplomatic entanglements.

One crucial difference relates to the way each country’s elites have been trained. Since the late 19th century, there have been sporadic attempts in France to replicate the gentlemanly model of British elite education that relies on the kind of impressive but superficial rhetoric imparted by its public schools and its most prestigious universities.

But this has been the exception rather than the rule. For the most part, French elites have prided themselves on rigour and a very high degree of technical competence. These are not qualities commonly associated with the British elites, who frequently come across as unconcerned with – if not hostile to – the minutiae of diplomatic negotiations. To put it simply: the French are always worried that the British will not follow the rules.

This wariness has been exacerbated by sharp differences in historical memory. France and Britain have diverging memories of key moments in modern European history, and these divergences have often been closely related to the way the other party behaved.

This has been clearly visible in the memories of the two great military conflicts of the twentieth century. Particular differences exist with respect to the Second World War. For example, the British remember Dunkirk as a triumph of endurance, while forgetting that this hasty retreat depended on the sacrifices of French soldiers. Meanwhile, the heroic post-war French myth of the Resistance ignored Britain’s key role in supporting clandestine wartime operations.

With such contrasting collective memories, it is hardly surprising that the French and British have instinctively distrusted each other’s motivations since 1945. When Charles de Gaulle twice vetoed British applications to join the EEC in the 1960s, it was not simply about securing France’s European interests; it was also because he felt the histories of the two nations were fundamentally incompatible.

The medium view: the fallout from Brexit

This deep history of disagreement and divergence has made an unwelcome reappearance since 2016. Brexit was not about France or the French, but it was obvious that the Franco-British relationship would be in the firing-line.

As the Brexit negotiations gained momentum, the French were the first to push back. Like de Gaulle, Macron styled himself as the arch-sceptic, determined to impress upon his European counterparts how untrustworthy the British were.

The negotiations themselves magnified national stereotypes. Michel Barnier, who was always pictured carrying wads of notes to his meetings, embodied France’s technocratic and legalistic view of the EU. By contrast, the jovial David Davis was the perfect representation of Britain’s slightly cavalier and haphazard approach to the European project.

Worse still, the ease with which the British appeared to shrug off prickly questions surrounding the Irish border or Gibraltar was reminiscent of the way they had repeatedly outmanoeuvred the French in the struggle for imperial dominance in the 19th and 20th centuries. Lofty speeches about a post-Brexit “global Britain” and – more recently – the controversial AUKUS military agreement revived long-standing French concerns about “Anglo-Saxon” dominance.

These conflicts chipped away at a fragile status quo. Whereas the period from the mid-1990s to the mid-2010s was marked by symbols of cooperation like the Eurotunnel or the 2010 Lancaster House defence treaties, the period since 2016 has seen a notable deterioration in the tone and content of the Franco-British relationship.

None of the issues that have come to dominate Franco-British relations in late 2021 are particularly new. Struggles over fishing quotas go back to the 1980s; the problem of migrants crossing the Channel exploded in the 2000s; and travel to and from France has become much more complicated since the UK formally left the EU. And yet diplomatic relations between France and the UK are at their lowest ebb for decades, with Johnson negotiating over Twitter, and the French locking British diplomats out of meetings.

There is a temptation to see these skirmishes as the product of cynical politicking. Macron, who is up for re-election in April 2022, needs to adopt a hard line in relation to the British in order to burnish his Gaullist credentials. Meanwhile, Johnson is hoping he can provoke a tabloid headline as memorable as The Sun’s Eurosceptic rallying cry ‘Up Yours Delors!’.

But this crisis in Franco-British relations is more fundamental than the caricatured rhetoric would suggest. Brexit has precipitated a change in the power balance within the EU, with the French seeing the departure of the UK as an opportunity to regain a pre-eminence that was lost in the 1990s with German reunification and British economic success.

At the same time, Brexit has damaged Britain’s capacity to engage in informal, behind-the-scenes diplomacy. The French no longer have a strong incentive to listen to their British counterparts, especially given the lingering, and barely disguised, history of distrust.

It is for this reason that the current breakdown in communication is so serious. It mixes long-term patterns and stereotypes with a medium-term rupture over Brexit and a high degree of short-term volatility. Even if the latter can be fixed through some judicious diplomatic wrangling, it will take much longer to resolve the medium- and long-term issues.

In the meantime, we can expect more migrants to die in the Channel, more Franco-British families to be cut off from each other by border closures and visa paperwork, and a growing popular backlash against the perceived intransigence of the other side.

By Emile Chabal, Reader in History at the University of Edinburgh.