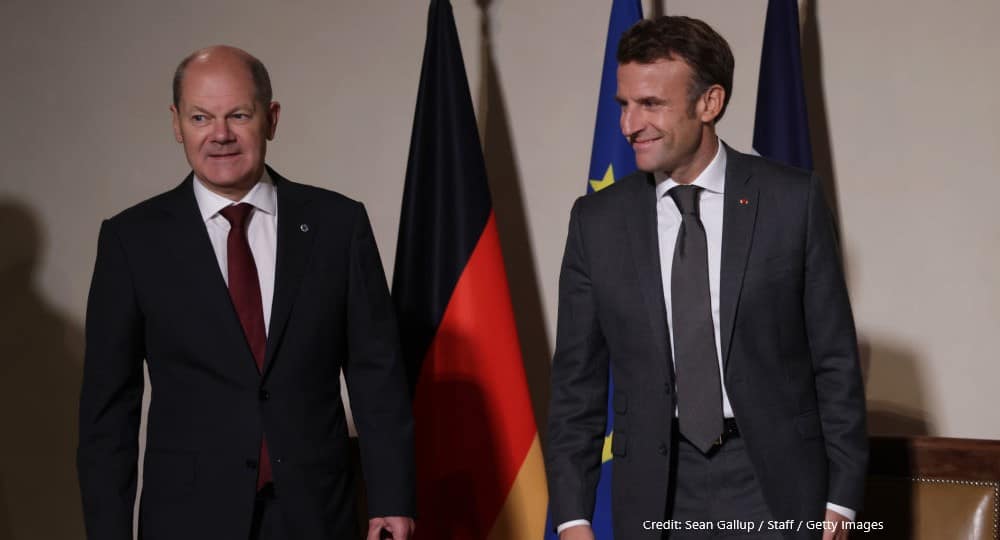 Francois-Joseph Schichan reflects on the recent rift between France and Germany, arguing that the typical perception of the relationship was always more myth than reality and that the present difficulties could allow it to be rebuilt on firmer ground.

The current difficulties in the Franco-German relationship recently exposed by the postponement of their regular joint cabinet meeting will not have come as a surprise for many French and German officials.

Despite appearances, there is a lack of trust between the two countries in key areas – from geopolitical issues to defence, security, economic and industrial policy. Underneath the glossy image of the Franco-German historic friendship that followed the Second World War lies a rather traditional relationship of competition and rivalry. It has not, however, prevented both countries from working together, being close partners within the Western alliance and leading joint initiatives at the EU level – as set out in the landmark Aachen Treaty of 2019.

There are short term reasons for the current crisis – shared frustration on the lack of progress on defence cooperation, different approaches to China, the response to the energy crisis and the upcoming reform of the growth and stability pact. It also comes at a time when both the German Chancellor and the French President are facing challenging situations domestically: Scholz leads a fragile coalition, while Macron faces a divided parliament with no majority.

These bilateral difficulties have deeper roots. France and Germany have always seen themselves in Europe and in the world in a very different fashion. France sees herself as a medium power with a global outlook, while Germany has always been more of a continental, mercantilist power. As a result, Germany has focused on the relationship with the US and NATO to provide for its security, while France advocated for a more independent role for herself and for Europe in world affairs – culminating under Macron with the concepts of European sovereignty and strategic autonomy.

Germany has also traditionally given priority to its economic and trade interests, while France’s approach to world affairs is much more focused on security and geopolitical considerations. These fundamental differences have always existed. But they have also always been overcome by successive French and German governments – as shown by the ‘Franco-German couple’ embodied by each generation of leaders from de Gaulle/Adenauer to Macron/Merkel. This all contributed to an image of the relationship that was more   myth than reality, but that also led to significant results for both countries and for Europe.

However, the combined pressure of the war in Ukraine, difficult economic conditions – which impose difficult political choices on which the countries are not aligned – and weaker governments on both sides of the Rhine contributed to  the current malaise.

For France, the balance of the relationship has also slowly deteriorated in the past few decades. President de Gaulle used to say that in Europe, France was the ‘jockey’ while Germany was the ‘horse’ – as quoted by one of his ministers, Alain Peyrefitte. On the German economic horse, the French jockey would lead Europe by providing general political direction. Germany’s reunification and EU enlargement changed this situation, as France continued to lose ground economically. Some might say that the horse has now become the jockey.

So why maintain appearances? Perception matters. In France, there remains an underlying anguish over German power – once its military power, now its economic and industrial might. For that reason, a good chunk of the French electorate wants stable relations with Germany, particularly in the centre-right of the political landscape on which Macron relies heavily.

In Europe, both countries need to coordinate if the EU wants to achieve anything meaningful. The perception of a strong Franco-German ‘engine’ has been key in the past to making decisive progress on the European front – most recently on the Covid recovery funds.

For these reasons, both Macron and Scholz will make sure that the appearance of good relations is at least partly restored. A joint cabinet meeting has been announced in January to do just that. The French Prime Minister Elisabeth Borne visited Berlin in late November to lay the ground for an official reconciliation.

There are areas where both countries can cooperate. Berlin and Paris are presenting a united front on the detrimental effects of the US Inflation Reduction Act for European economies, and could push for a coordinated EU response, for example by mobilising the Covid-19 recovery funds that have not been spent yet.

France and Germany also have a similar approach to the war in Ukraine and to Russia. The two countries will need to coordinate closely to make sure that they remain tightly associated with any discussions on Ukraine as the debate on potential negotiations with Putin makes progress, particularly in the US.

For Macron, a close relationship with Germany is also necessary to give a more concrete meaning to the concept of strategic autonomy and European sovereignty. His objective has been to try ‘converting’ Germany to the fact the Europe needs to chart its own political, economic and security course, while remaining firmly in the Western alliance. The road to a stronger Europe internationally runs through Berlin. So far, this has fallen largely on deaf ears on the German side.

Fundamental differences will indeed remain. The ‘Zeitenwende’ announced by Scholz after the start of the war in Ukraine seemed to indicate that Germany might be ready towards a more assertive approach on defence and security. But it almost immediately resulted in the purchasing of US combat aircrafts F-35 by Germany, raising questions about the German commitment to the joint Franco-Germany FCAS project (future combat air-system – the next generation of jet fighters and one of the central elements of Franco-German defence cooperation in the past few years).

This came as a shock for France. Industry partners – Dassault and Airbus – seem to have found a solution to get to the next stage of FCAS, but there will be numerous other milestones equally, if not more, difficult in the future. Both sides know that FCAS is now unlikely to become a reality – and certainly not in the initial timeframe.

The end of the Franco-German myth is not necessarily a bad development. It allows for the rebuilding of this crucial relationship on steadier ground. For both countries, there is no alternative if they want to make further progress on European integration and their role in the world.

By François-Joseph Schichan, Director, Flint Global, and former Head of the Political Department at the French Embassy in London.