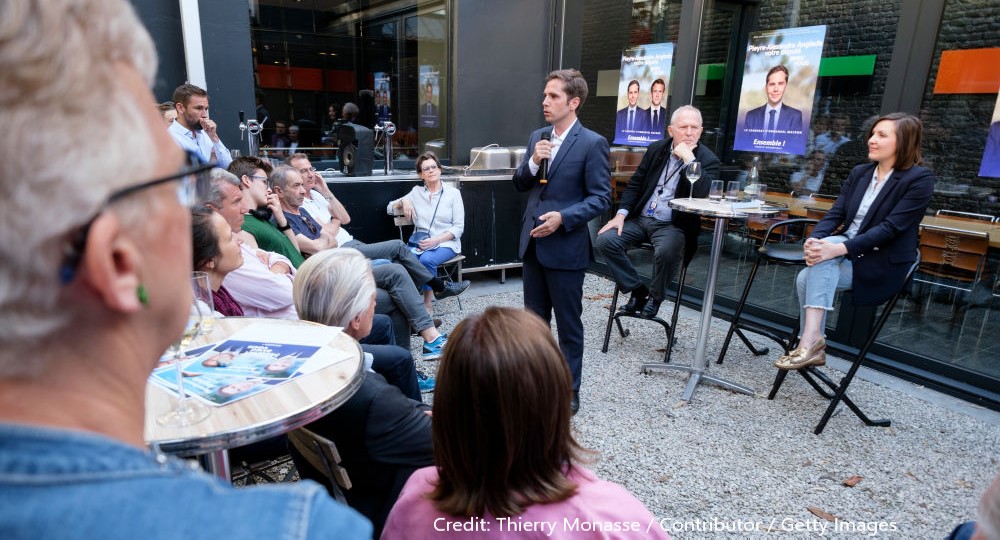 The results of the French legislative elections constitute a watershed moment for the French political system. The parliament is more fragmented than ever before, no party holds the absolute majority, and Macron is facing two strong oppositions from the left and the extreme right. Macron as a president and the parties in government will need to create a new modus operandi for governing the country.

Given that Macron had been the main proponent of European sovereignty over the last five years, the complicated setup of the French political landscape and the resources it will demand from the president also sparks uncertainties for Europe.

France is a so-called semi-presidential political system, where the president enjoys wide-ranging competences, and the government is responsible to the parliament. Accordingly, it is crucial for any president to obtain a parliamentary majority to pass laws and to implement their respective political agendas.

With a few expectations, French voters have normally also granted the parliamentary majority to the president they had previously elected; in April, many analysts were optimistic that this historic continuity could also play out in favour of Macron’s party this year and allow him to govern the country with his projects thanks to an absolute majority.

Yet, Ensemble!, the coalition built from Macron with his own party (Renaissance) and like-minded centrist-liberal forces, only won 245 seats in parliament. Macron now needs at least 44 members of parliament from other forces to be sure to pass a law.

Domestically, Macron’s main challenge consists in the fact that he is not only facing one but two oppositions in parliament, with completely opposed agendas: the left-wing coalition Nupes (131 seats) and the far-right Rassemblement National (89 seats).

While any kind of co-operation with the far-right is a red line and can be completely excluded, some members of the Nupes — particularly those from the centre-left Greens — might have sympathies for specific projects.

However, it seems highly unlikely that the entire group of Nupes will support Macron, given that one of their key electoral promises was challenging the president’s politics via parliament. The fact that the Nupes have just announced they will present a vote of non-confidence against the government on 5 July underlines that Macron is facing a troubled five years, likely characterised by a climate of disruption rather than constructive opposition.

In this context, the Les Republicains, the centre-right party which had suffered a heavy defeat during the presidential elections, but scored surprisingly well (61 seats) during the legislative elections, have significant leverage as a ‘king-maker’. Their agenda at least partly converges with Macron’s, and influential figures within the party might be able to negotiate with the president.

At the moment, they still confirm that they are an opposition force – but this might shift over the next few weeks.

This new political setup constitutes a key challenge for French president Emmanuel Macron in both the short and medium term, and is a completely new experience for the French political system. All of which leaves Macron with two options.

First, he could either aim to broker a sort of coalition agreement with Les Republicains to ensure their support for key projects through the next few years. However, this is risky: the leader of political groups in the French parliament has few levers to influence members of parliament to follow an official line. Accordingly, Macron cannot take support for granted, particularly in the last two years of the legislature when parties will themselves prepare for the next election.

Furthermore, joining forces with Les Républicains would come at a high political cost. Three of Macron’s ministers have not obtained a mandate in parliament and will be replaced, and one can expect Les Républicains to ask at least to fill these positions, if not more.

Yet, the alternative is no less risky, as it would consist of seeking majorities for individual policy proposals. This would cost a significant amount of time with uncertain outcomes, and have the potential to significantly weaken Macron domestically.

No matter which direction Macron chooses, the new composition of the National Assembly renders governance in France more volatile over the next five years. Particularly during the last two years, when the parties will position themselves as candidates to follow Macron in office, one can already anticipate an early ‘lame duck’ period for the president, since no party will be willing to support easy wins for the latter.

All this will directly impact both the European Union and France’s bilateral relations in Europe. At least in the short term, the challenges of building consensus and finding majorities can be expected to impact Macron’s capacity to perform his role as a leader in Europe or for pitching new projects on the European level.

While French influence in the European Union behind the scenes will undoubtedly remain high, Macron might himself be less visible.

Yet, given that foreign and defence policy are so-called “domaines réservés” (“reserved domains”) for the president, decisions in these fields, unless they require ratification through the parliament, are mostly detached from French domestic politics.

In fact, Macron could even try to leverage his European initiatives to gain domestic support for projects where European and domestic issues are closely intertwined, such as climate, energy or security.

For example, an ambitious French initiative for another European project similar to the Covid-19 recovery fund – mitigating the consequences of the rising cost of living – could generate positive spillover-effects for his domestic agenda.

In the next five years, France’s partners will need to closely follow French domestic politics. French politics could create the potential for co-operation with a president who needs wins on the international scene domestically and might hence be willing to make concessions. Or, more leadership from other European players on key issues when Macron is dealing with rifts in domestic politics may be required.

Finding a common answer to the war in Ukraine will be the first case to figure out how Europeans — and, most importantly, France itself — deal with these challenges.