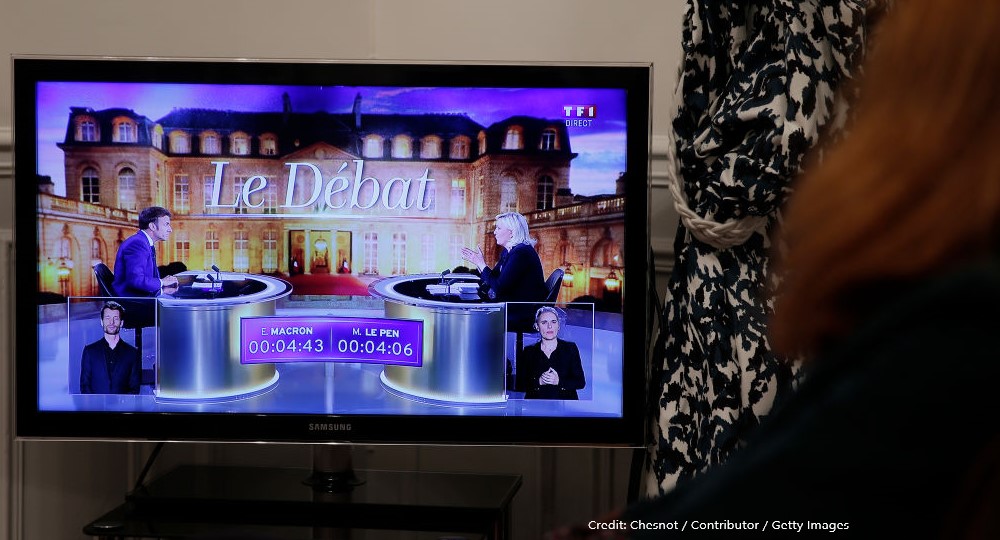 The French presidential election pits the liberal pro-European political mainstream against the radical right. Irrespective of how the runoff turns out, the first round of voting entrenches a political movement with a strongly xenophobic message and a dubious commitment to liberal democratic values as the main opposition force in French politics. What does this tell us about patterns of anti-system voting and political contestation in contemporary Europe?

Surveys on the first round of voting reveal a striking age divide in French politics. However, this age divide does not follow the pattern seen in British and American elections, where older votes were more likely to vote for right-wing populists. Instead in France, support for Le Pen is higher amongst under 60s, hitting its lowest share amongst those over 70 (see Figure 1). What is going on? 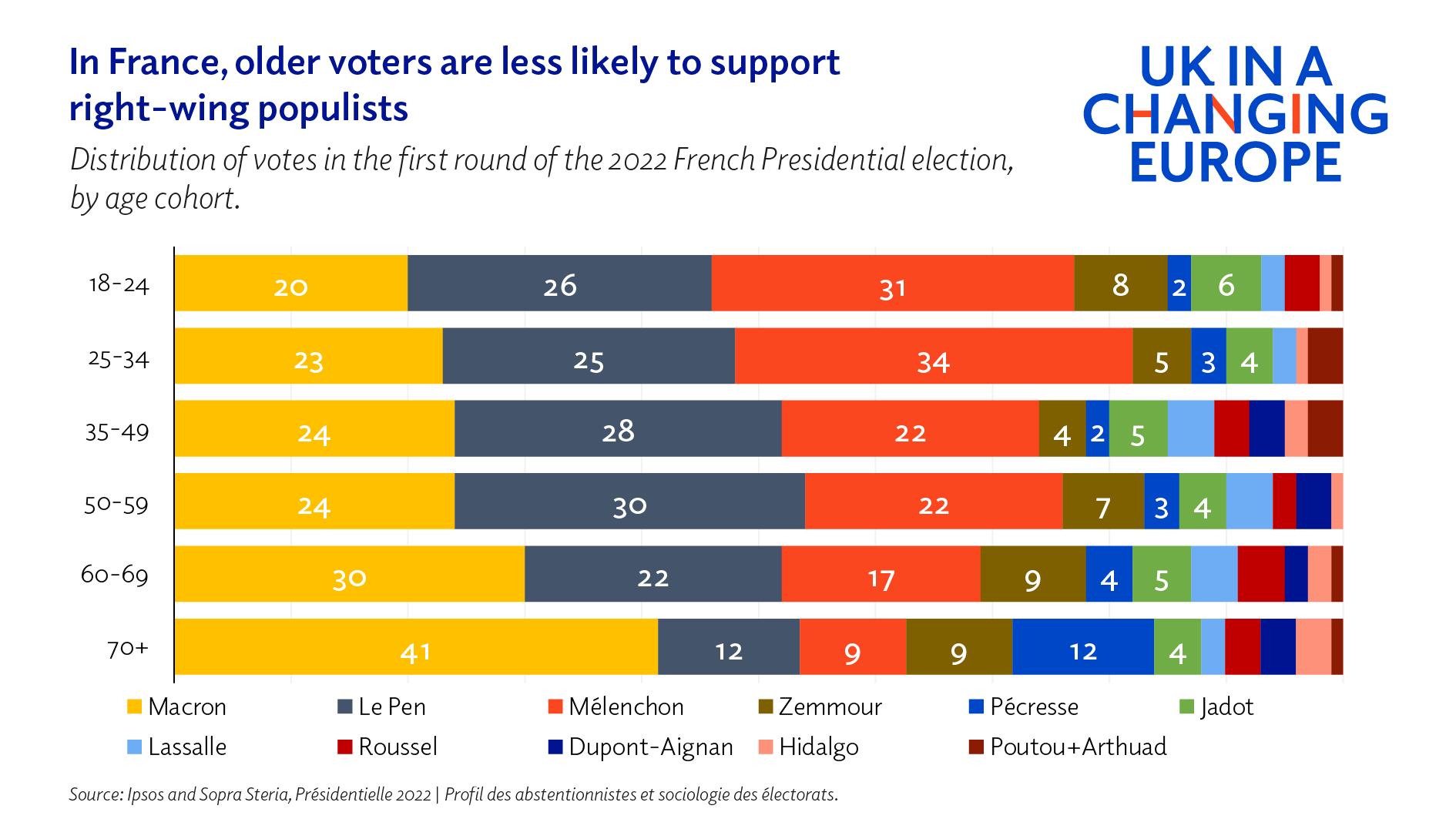 In French politics, the fragmentation of the electoral map makes straight comparisons with the majoritarian democracies (like the UK and the US) problematic and potentially misleading.

The clear pattern emerging from the French vote is that Macron, who can be considered the heir to the mainstream party system benefits from the relative conservatism of voters over 60, while younger voters largely cast much more anti-establishment votes.

If we add Macron’s share to the other mainstream forces (chiefly Pécresse and Lassalle on the centre-right and Hidalgo on the centre-left), we see that support for the traditional political establishment, broadly understood, drops from around 57% amongst the over 70s to just 27% amongst the 18-24 age group. So, youth is a clear predictor of anti-system voting, and support for traditional political candidates grows with age – especially with reaching retirement age.

Although support for the far right candidates is rather high amongst French youth, the really striking pattern is their support for anti-system candidates in general. Whilst Le Pen won around a quarter of the vote amongst voters under 35, the most prominent left candidate, Jean-Louis Mélenchon, did even better, winning over 30%. Macron trailed with little over 20% of the vote for the youngest voters.

In a forthcoming paper, we provide some insights into why this is happening. We show how differences in welfare and labour market policies help explain why the far right and the radical left vary in their levels of support across the advanced democracies. These policies are key to shaping which groups are most exposed to economic shocks, and therefore which voters are likely to cast a vote against the prevailing political system and its policies. 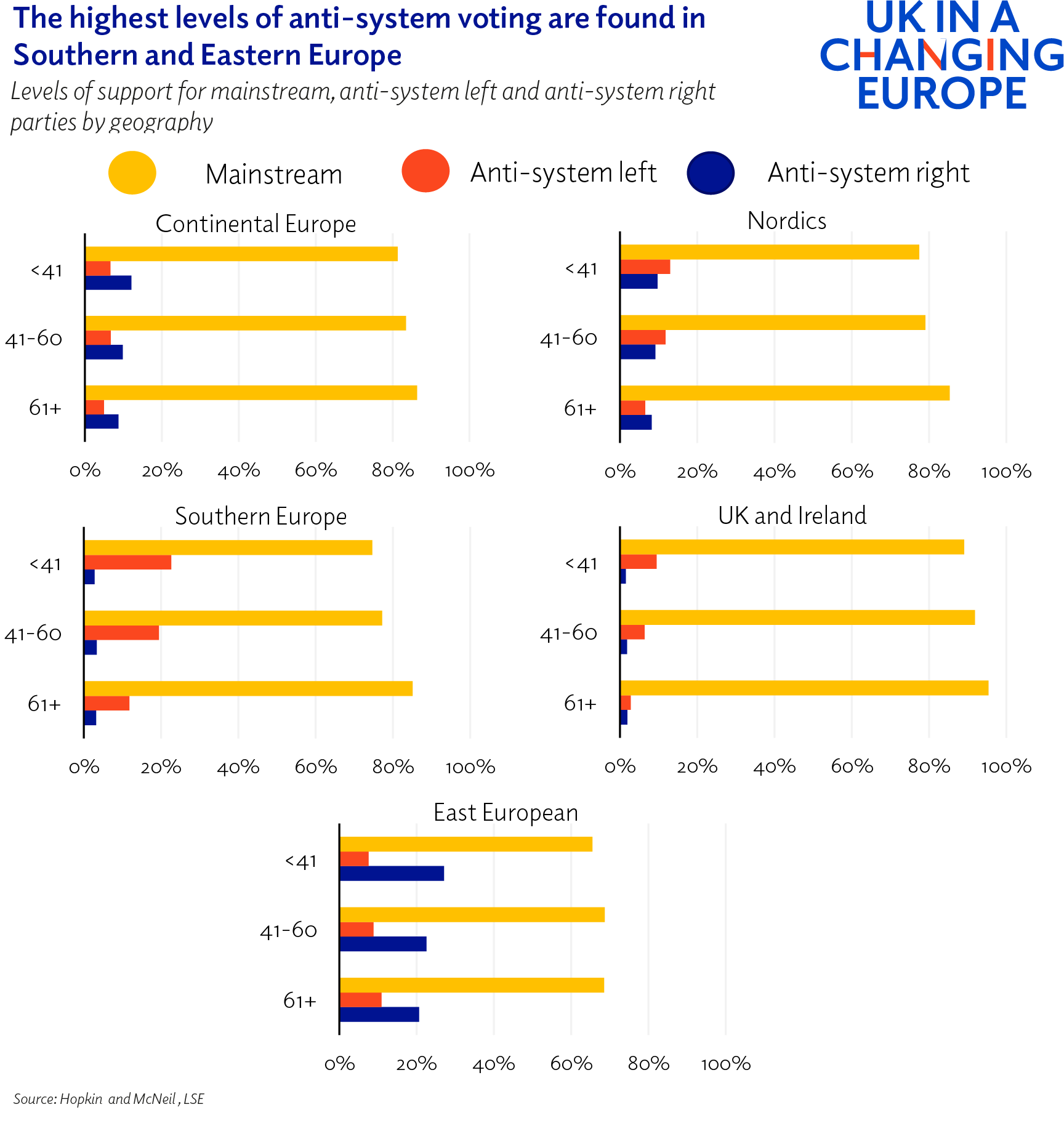 Figure 2 reveals interesting patterns that suggest a connection between the type of social and economic model a country has and the extent and nature of anti-system voting. The highest levels of anti-system voting are found in southern and eastern Europe, which is unsurprising given the relatively lower levels of welfare support and higher levels of unemployment in those countries.

But underneath this generalised trend there are intriguing differences.

First, in most countries younger voters are more likely to support radical left parties than the far right (think Syriza in Greece, Podemos in Spain and Bloco Esquerda in Portugal). Southern European welfare states tend to be particularly dualistic, with very generous social provision for ‘insider’ groups, especially pensioners, and little in the way of social support for the labour market and welfare ‘outsider’ groups such as the unemployed or low-paid precarious workers, who are disproportionately likely to be younger.

The so-called ‘continental’ welfare states, such as Belgium, France, Germany and Austria, also have strongly dualistic features, due to their origins in occupational social insurance schemes which protected older, usually male workers the most. This means that younger people are more likely to face unemployment, job insecurity and limited welfare support. As a result, they are also more likely to support anti-system parties, including those on the right.

Our approach, which focuses on the different economic circumstances facing voters, does a better job of explaining how even younger voters can end up supporting the far right. When we look at the characteristics of voters supporting anti-system parties in different age groups, we find that education is an important factor: higher education seems to have a powerful inoculating effect against sympathy for the far right, as voters of whatever age who have attended university are equally unlikely to support the far right. However, as we move down the education gradient, support for the far right increases (see Figure 3 below), and it increases more amongst younger than older voters. 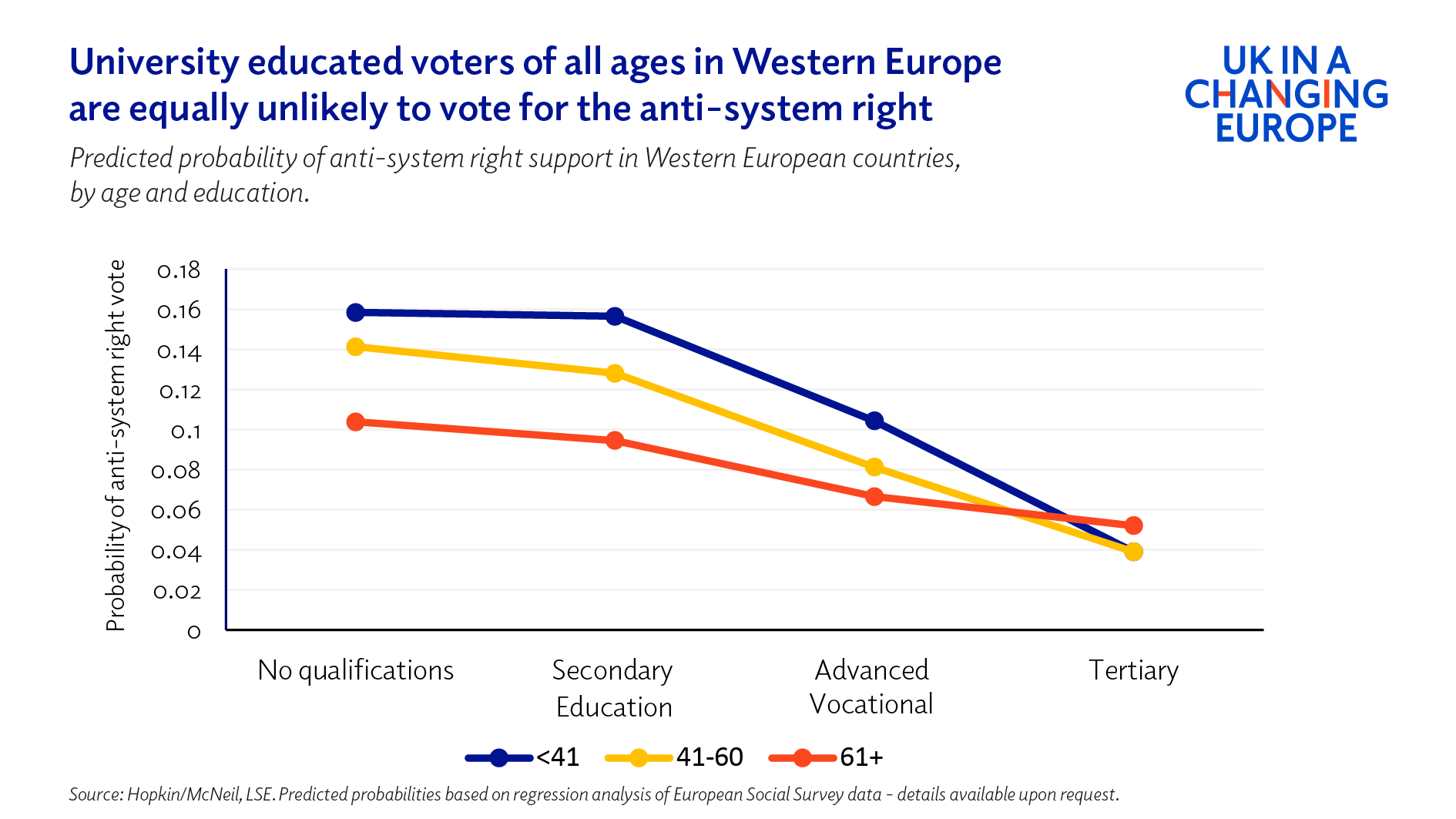 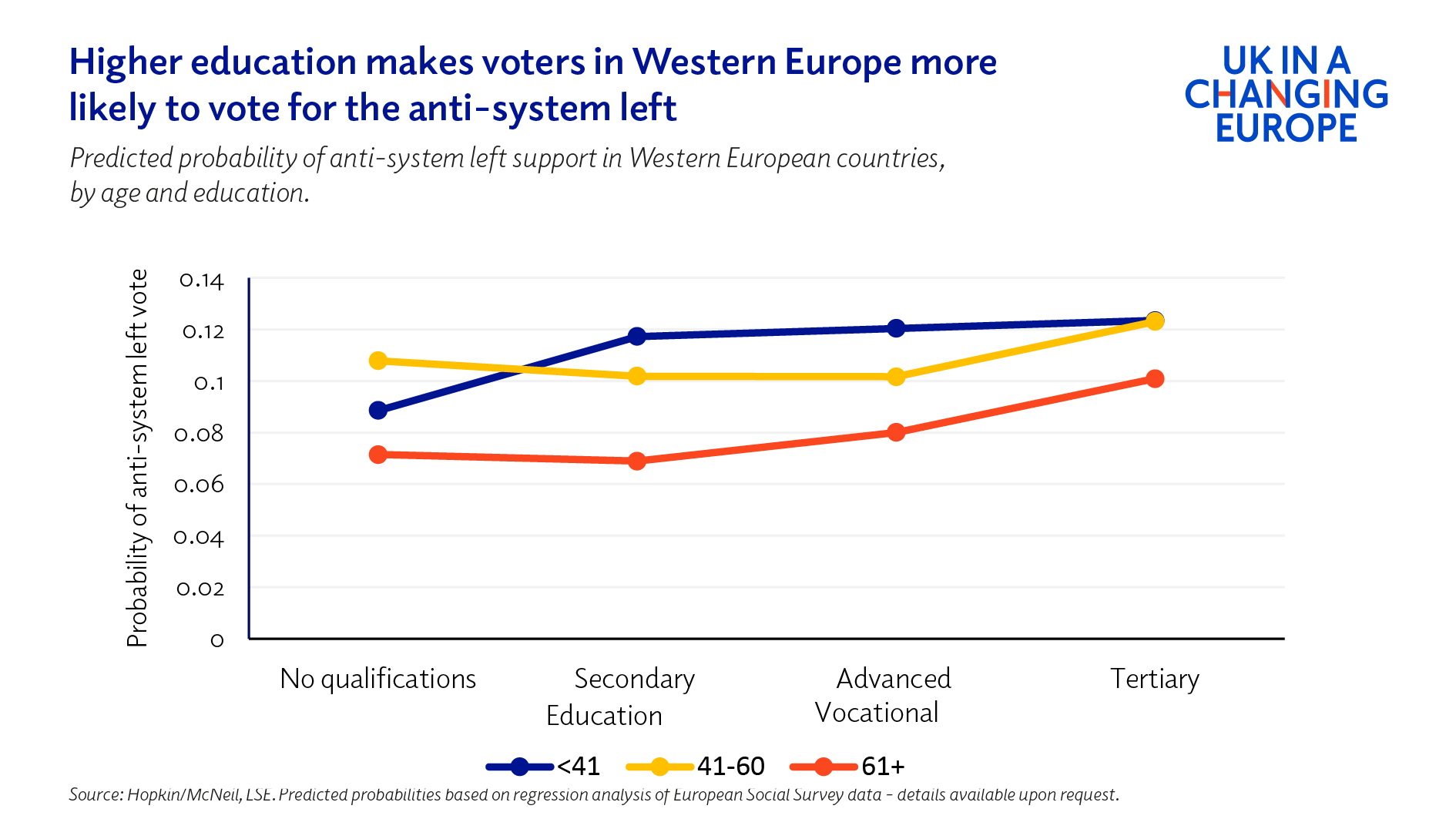 In France, surveys have shown that higher education makes voters who wish to vote against the political establishment more likely to support Mélenchon, whilst school leavers are more likely to back Le Pen. In France, weak economic growth and the long retrenchment of the welfare state, symbolised by Macron’s rash pre-election promise to increase the retirement age, has left many working age voters feeling increasingly insecure and frustrated. This has created a large pool of disgruntled voters who feel bound to protest against a system that is not working for them.

Progressive minded graduates and less educated voters share a feeling that things need to change, but disagree on the direction of this change. The threat of the far right requires a policy response that deals with economic insecurity and precariousness. Failure to do so means that the Le Pens and their counterparts in French politics and in other European countries will be around for some time to come.

By Jonathan Hopkin, Professor of Comparative Politics, and Andrew McNeil, PhD candidate, at the London School of Economics and Political Science.