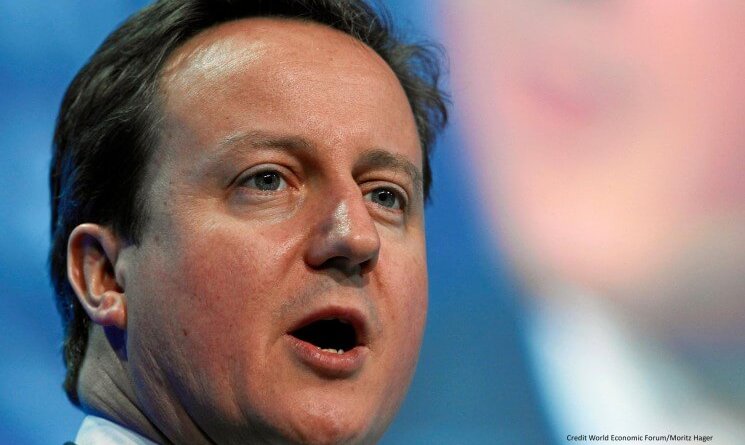 Five years ago today, David Cameron pledged an in/out referendum in what famously has become known as the Bloomberg speech. His stated purpose was to establish a public consensus behind a European future for the UK; his unstated purpose was to stop the Conservative Party banging on about Europe.

But now it seems this ‘pacifying strategy’ has manifestly failed: Cameron’s approach has divided UK politics and society to an unprecedented degree, while on Europe the Conservative Party is more querulous than ever.

The speech proposed a negotiated ‘claw back of powers from Brussels’, as many in the media gleefully described it. Having kicked the EU into shape, Cameron would then ask for public endorsement at the ballot box.

So far, so Harold Wilson in 1974-75. Yet the previous referendum did not settle the matter. Why did Cameron think it would be different this time around? He had first-hand experience of the damage and humiliation Europe can inflict on Conservative politicians: early in his political career he had been a special adviser to Norman Lamont when sterling was forced ignominiously out of the Exchange Rate Mechanism in September 1992.

Both of his Conservative predecessors as prime minister – Thatcher in 1990 and Major and 1997 – had left office because they could not solve the Europe dilemma to the satisfaction of a Cabinet and party riven with tribal in-fighting. Did Cameron not see the warnings, or did he choose to ignore them? Maybe his ‘frank’ memoirs will tell us (but probably not).

There is also the issue of character and leadership. Difficult though it would have been, Cameron could have extended a time-honoured tradition in British politics of refusing to use referendums – those ‘devices of dictators and demagogues’, as Clement Attlee described them.

For all the depictions of politics as howling gales of conflicting opinion pushing leaders from pillar to post, prime ministers usually have at least some capacity to exert agency at key moments in an unfolding debate.

Cameron had the kudos of having won a shock general election victory in 2015, when another hung parliament seemed the likeliest outcome, and so, perhaps, he did not have to put the question to a referendum. Previous leaders had resisted, and during the Conservative-Liberal coalition he had managed to kick the European can down the road.

Yet, we can see in the Bloomberg speech that Cameron felt he had no alternative. He interpreted the forces in the Conservative Party and country – especially the right-wing media that made no secret of its opposition to the EU – as too overwhelming to be resisted any longer.

He framed it firstly as a question of trust. The British people, he said, have ‘had referendums promised – but not delivered’. Secondly, he pointed out that the EU was going through a period of rank instability.

Austerity, the Eurozone and global financial crises, and a host of populist movements and parties across Europe had put the EU’s very purpose under the microscope. Certainty about the UK’s commitment to the EU was required to usher in some calm amidst the storm.

Several articles penned in the aftermath of the Bloomberg speech commented on the cavalier nature of Cameron’s pacifying strategy. One such, by Tim Oliver, noted that in a country where both the EU and Euroscepticism are ‘deeply embedded parts of national life’, a referendum would not solve things.

A vote to stay would not kill off the EU-bashing in politics and the media, while a vote to leave would not easily be accepted by those comfortable with an EU-level dimension to UK national identity and governance. Cameron’s approach always had the whiff of a ‘gamble’ about it.

For Cameron to succeed, therefore, he needed some high quality tactics that might just rescue a demonstrably shaky strategic ambition. Here, he fell down just as badly. Long-term structural changes at EU level and in the domestic political economies of member states had removed most of the props on which pro-European arguments had, historically, been based.

Rebellion was in the air and vocal critics of the EU in the national media were spoiling for a fight. These developments lent credence to arguments that a binary referendum was a dangerous option given the number of swing voters that needed winning over for Remain to prevail.

Cameron was part of (‘led’ would be the wrong word) a wishy-washy Remain campaign that lacked coherence, organisationally and in its message. Some influential politicians who could have wooed voters on the left, notably Jeremy Corbyn, went missing.

The few big beasts in his Cabinet who did not campaign to Leave, such as Theresa May, came across as half-hearted and hedged, promoting ‘Project Fear’ and a rather insipid version of the status quo.

Explosive topics such as immigration cowed many Remainers into silence. Those putting the emotional case for European unity, such as the Liberal Democrats, Greens and the SNP, received little coverage in what research suggests effectively played out as an English Conservative Party drama.

The Leave campaign was no less internally divided than was Remain. Nonetheless, between them, the figureheads in the Conservative-dominated VoteLeave and the UKIP-dominated Leave.EU, emphasised salient voter concerns about the EU, conveying a simple, hard-hitting idea: ‘take back control’. Leavers constructed themselves as standing apart from a selfish, wealthy, pro-EU ‘establishment’ elite in London and Brussels.

They picked up on the populist zeitgeist of the times, speaking directly to the ‘ordinary person’ on the street as opposed to metropolitan fat cats. Global institutions such as the International Monetary Fund could predict a downturn in the UK’s GDP figures all they liked, said UKIP leader Nigel Farage, but what mattered to him was the ‘wellbeing of those living and working in our country’. Project Fear was written off as scaremongering by out of touch ‘experts’.

Still more unexpectedly, perhaps, Leavers successfully delegitimised Remain supporters from outside the UK, such as Barack Obama, by saying they should stay out of a sovereign UK decision.

Finally, and certainly not least, with a sharp rise in the salience of immigration, Farage attacked the EU’s founding principle – freedom of movement – underscored by visually commanding, and highly contentious, campaign posters. Crucially, it was asserted that the potential enlargement of the EU to a vast new member state, Turkey, would place impossibly prohibitive financial and social costs on an already weakened Britain.

The paucity of the Remain messages matched the paucity of thought that went into the original Bloomberg strategy. Judged against the aims for the referendum Cameron laid out in 2013, his European policy has to be regarded at best as ill-conceived and at worst, reckless.

While May will go down in history as the Brexit prime minister, Cameron will be the architect, the vital enabler for Brexit in the first place.

By Oliver Daddow, Assistant Professor in British Politics and Security, university of Nottingham.