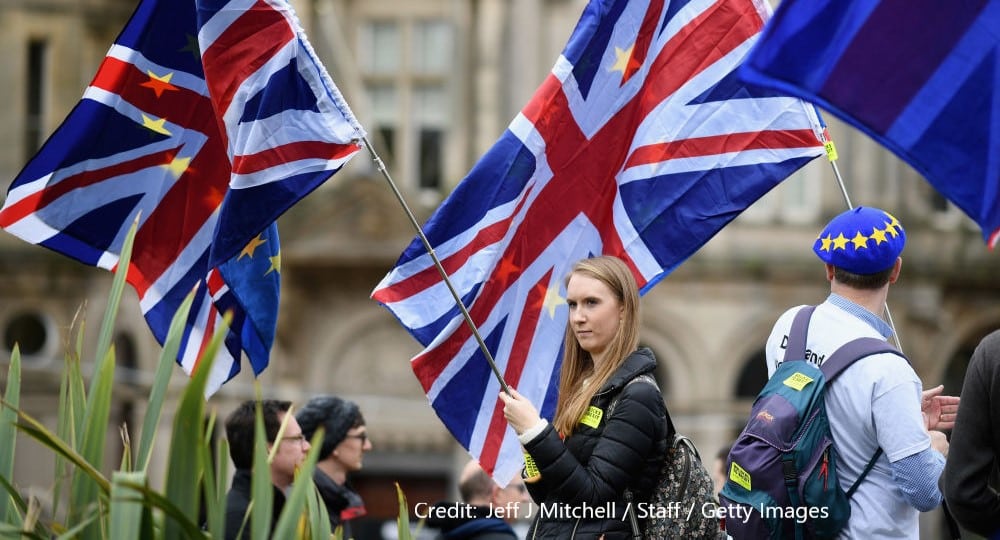 Younger individuals are more likely to have voted Remain in 2016 and to have supported Labour over the Conservatives in subsequent elections.

Additionally, in the most recent elections of 2017 and 2019 women were more likely than men to have voted for a left-wing party: Labour.

Digging deeper into this gender gap at recent elections shows that it is larger in younger age groups.

This difference in attitudes towards the EU was a core reason behind the gender gaps in younger age groups at the 2019 election.

But why are young women particularly pro-EU? And why is the relationship between support for the EU and age different for women and men?

One possibility is that women’s lives have changed more than men’s.

Whilst, in the past, older women faced stronger barriers than men to their participation in education and the workplace, societal change means that these barriers have been weakened.

In fact, there is now an almost 10% gender gap in the opposite direction in higher education participation. Women’s participation in the workplace has also improved, and the pay gap is much narrower among those under 40.

There are two core reasons why these changes could help explain gender gaps in attitudes to the EU and more broadly.

Having a university education, and the related opportunities in the workplace this brings, means individuals are likely to see more advantages for themselves in being part of the EU, such as having freedom of movement.

Attending university also makes a person more likely to have socially liberal values. Having such values is strongly associated with voting Remain.

Staying in the EU was thus potentially aligned with younger women’s own economic interests and with their social values.

By using data from the British Election Study Internet Panel from 2016, we can test whether there is evidence to support these explanations.

As well as their opinions on the EU, the BESIP also gathers a range of other information on individuals, often called demographic data, such as their age, education level, income, or ethnicity, as well as their political and social values and attitudes.

This means that we can study both where there are gender gaps (below) and what affects these gender gaps.

Euroscepticism by age and gender 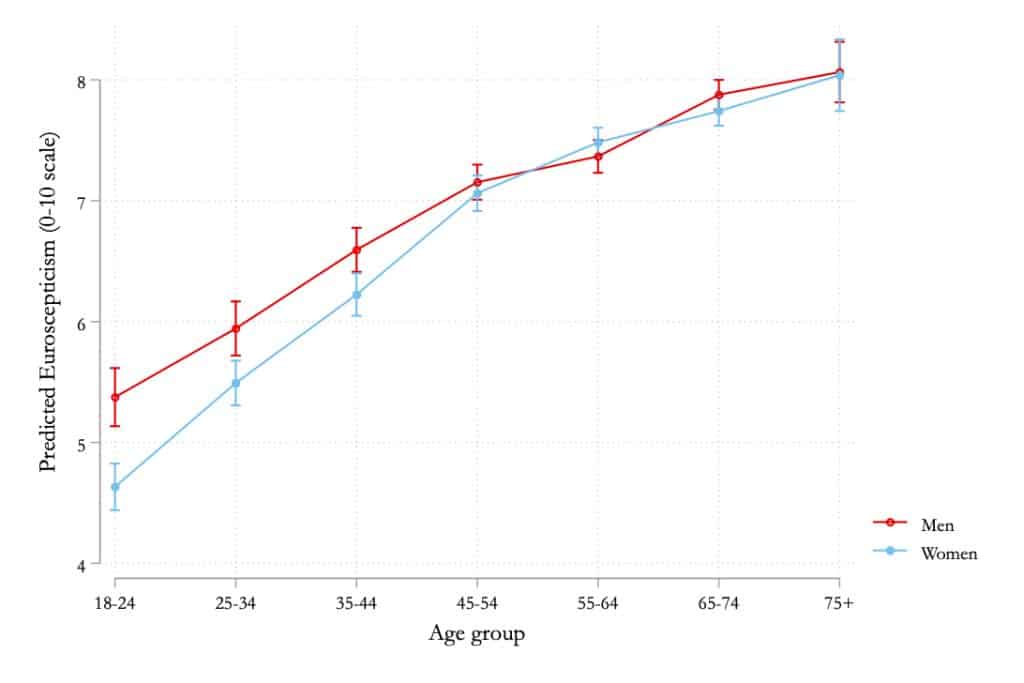 Now, we can add more information – called ‘control variables’ – to our model to see what affects these gender gaps.

In simple terms, if we add a control such as education to the model, the model will adjust its predictions to account for the education of the individuals in the model.

If the gender or age differences predicted by the model get smaller when we add education (or any other variable of choice), then this is good evidence that they are a potential cause of the gender gap.

The control variables added here are demographics – such as education – and then values and attitudes.

The left panel below shows the raw gender and age differences in under 45s, the centre panel with demographic controls such as education, working status, and occupation added, and the right panel with values and attitudes added as well as the demographics.

Euroscepticism by age and gender, with controls 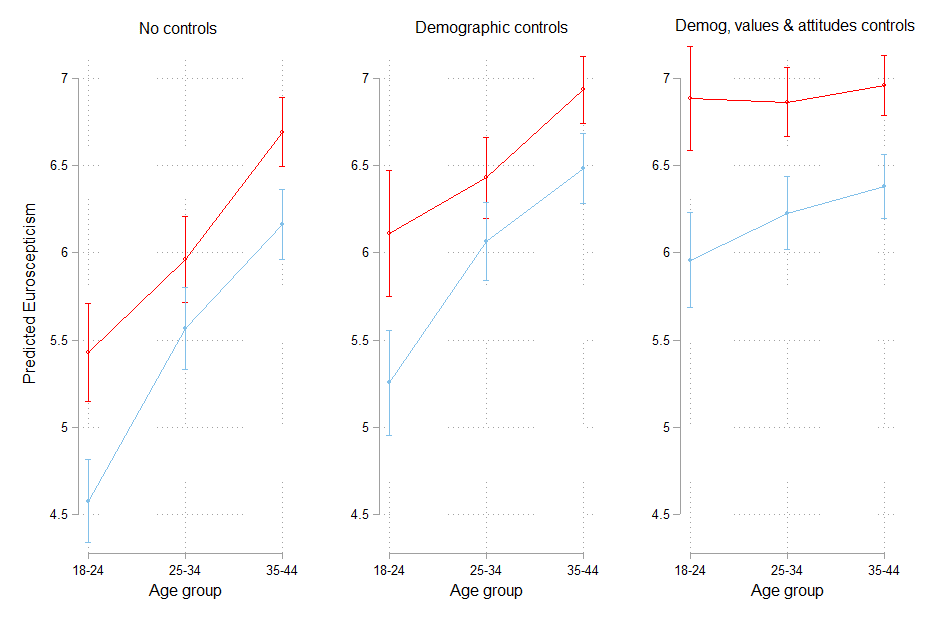 Source: British Election Study Internet Panel Wave 7. N~23000. N.B. This is a slightly smaller subset of the sample than in the first figure, producing a non-significant result in the 25-35 age group. See the full paper for details.

We can see that adding the demographic controls to the model in the centre panel reduces the differences by gender and age in Euroscepticism by a small amount.

This is good evidence that gender gaps in these groups are at least partially caused by differences between men and women in factors such as their education level.

However, adding values and attitudes, whilst reducing age differences, instead increases the gender gaps in the different age groups.

Further investigation reveals that this is because the measure of ‘social’ values used as a control includes a question on censorship – and women are more in favour of censorship than men.

In the context of the feminist movement and campaigns against pornography and Page 3, this could still be considered to fit progressive rather than traditional values.

Overall, as adding demographics and values to our model of Euroscepticism reduces both gender and age gaps, there is good evidence that factors such as the increasing levels of education and workforce participation among younger women does seem to have made them more positive about the EU.

What do these results mean for future elections?

In the short term, while Brexit or other issues from what we could call the ‘cultural divide’ shape electoral politics, it seems likely that the gender gaps in younger age groups will persist and drive an overall gender gap.

Even if Brexit fades in significance, as there are multiple educational, social, and economic inequalities between men and women by age, gender divides in voting behaviour can be expected.

In the long term, if such inequalities are tackled, we could expect newer generations of voters to show smaller gaps.

Additionally, the analysis here also shows that there is no gender gap in attitudes towards the EU in older age groups  despite there being obvious social and economic inequalities in these groups too.

Do the differences between men and women matter less as they age, perhaps due to forming partnerships, sharing resources, and discussing politics with one another? Or will the gender gap get wider as younger voters replace older?

These questions remain to be answered, but what is certain is that as society continues to change, we should expect the gender gap to change too, both in Euroscepticism and vote choice at future elections.

By Dr Ceri Fowler, Teaching Associate, the University of Manchester.

This piece is based on an article published in The British Journal of Politics and International Relations.