The Conservative lead over Labour amongst men was thus a huge 18 percentage points, compared to just a 5-point lead amongst women. If the electorate was entirely female, the Conservatives would have had a much slimmer majority than the one they enjoy now. If the electorate was entirely male, Labour would have done even worse – and their seat share in 2019 was already the lowest won since 1935.

From 2015 onwards, women have been supporting Labour in higher numbers than men by ever larger margins. The gender gap in support for the Conservatives reversed in 2017, and more than doubled in size again between 2017 and 2019. 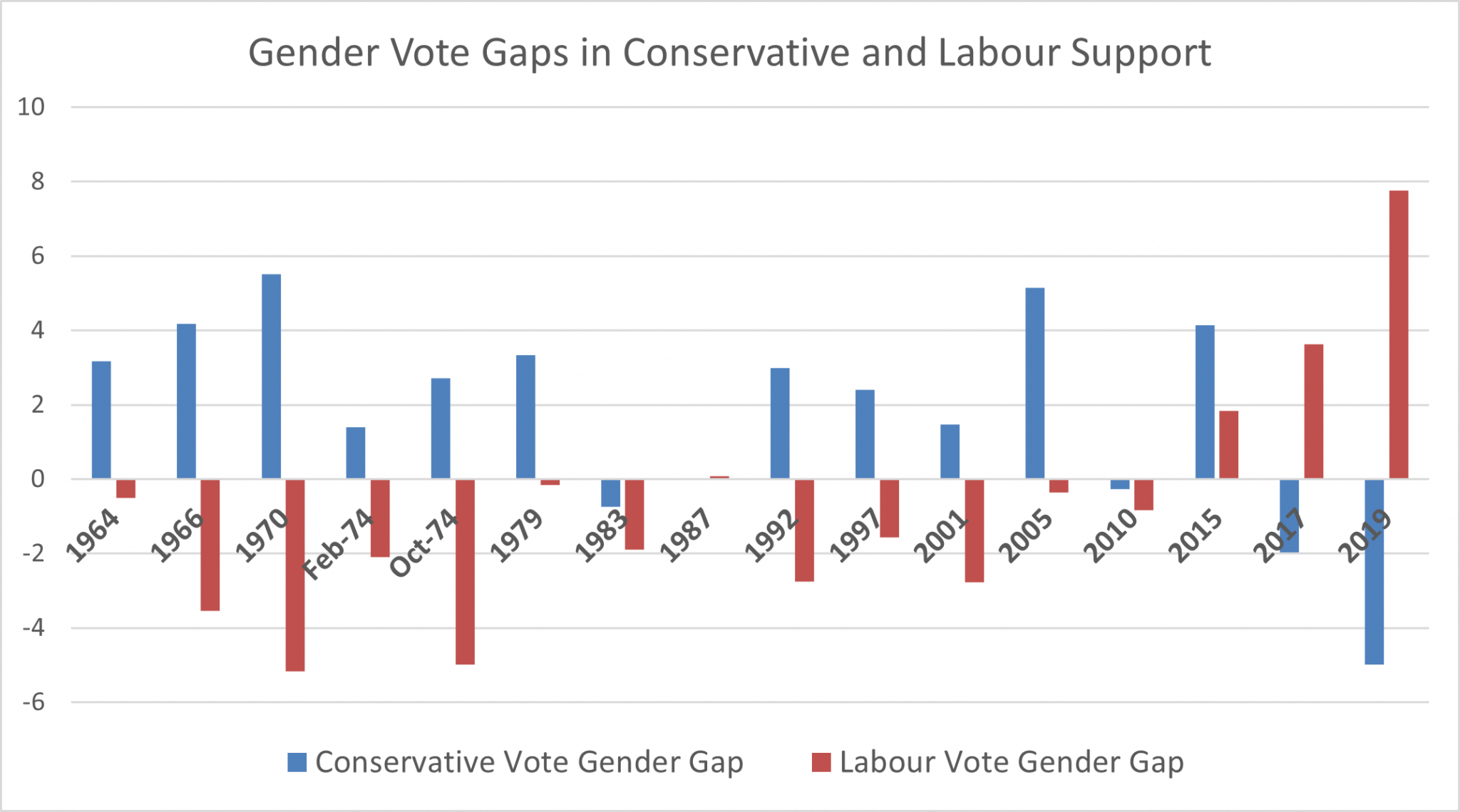 We saw similar patterns in 2015 and 2017, where younger women, concerned about the economic consequences of austerity, voted for Labour in larger numbers than younger men.

However, gender differences were even wider in 2019, and there is evidence (based on work conducted with Prof Rosie Campbell) that it was more related to attitudes towards Brexit in this election than to economic circumstances.

Women have always been more ambivalent than men in their attitudes towards leaving the EU, although there was only a marginal gender gap at the referendum in 2016. Importantly, gender differences in Brexit attitudes differ significantly by age.

The recently released BES data shows that opinions on a second EU referendum differed strongly by gender and age. 60% of women aged 18-35 wanted a second referendum, whilst only 26% were definitely opposed to one.

Amongst young men, 50% wanted a second referendum, but 45% were definitely opposed to holding one. At the same time, 67% of men aged 65 and over, and 72% of women in this age group, said they definitely did not want a referendum.

Both the positive support young women showed for a second referendum, and their lack of opposition to the proposal, likely drew them to the Labour Party which stood on a platform of re-negotiating a Brexit deal and putting it to the public. 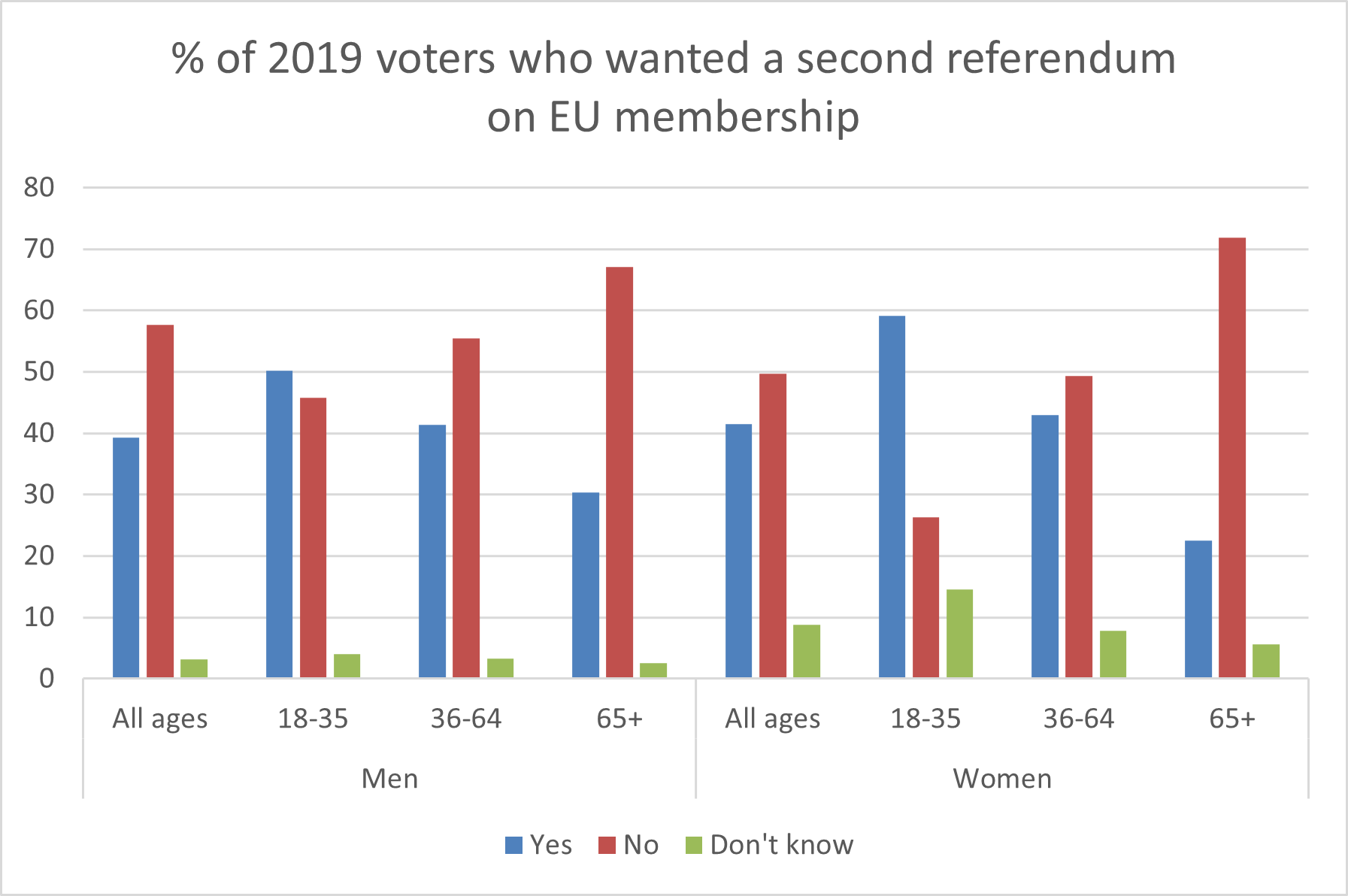 The Conservative Party thus have a ‘woman problem’ – and attracting more female voters may be hard for them if they follow the extraordinary expansion of state spending during the pandemic with a period of state retrenchment and cuts, especially since women have been particularly impacted by the pandemic in the labour market and when it comes to the division of childcare.

Women, especially young women, are likely to also particularly punish the Conservative party if Brexit continues to be salient. However, if Brexit drops down the agenda the electoral coalition that the Conservatives forged in 2019 is likely to be weakened, given the party’s success in attracting Leave voters.

The Labour Party, on the other hand, has a ‘man problem’, and faces having to reconcile the preferences of young women amongst whom they enjoy high support, and the ‘Red Wall’, often male, voters that they lost at the last election. Focusing on economic issues is likely to unite both these groups, especially in a (post-) pandemic world, whilst any focus on ‘cultural’ issues will likely divide them.

The local elections, now confirmed for May, will provide an early indicator of whether gender will continue to be an important electoral divide, or whether one or both of the parties can successfully appeal to both women and men.

By Dr Rosalind Shorrocks, Lecturer in Politics, University of Manchester.