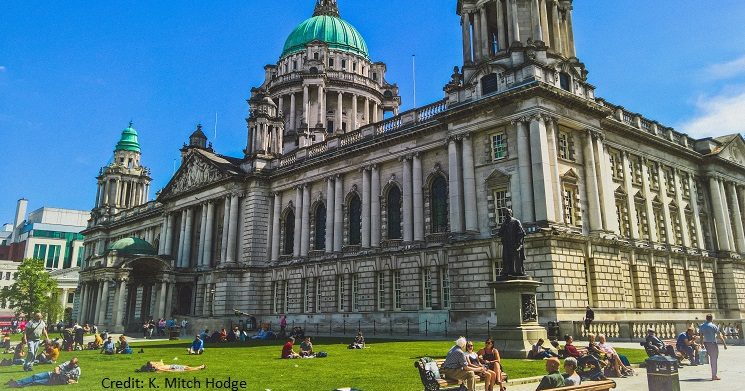 In Northern Ireland, the upcoming general election looks set to generate a high degree of political churn, with the Irish Times’ Gerry Moriarty predicting that up to eight seats could change hands.

In the Foyle constituency, Social Democratic and Labour Party (SDLP) leader, Colum Eastwood, will be seeking to take back the seat long-held by his predecessors John Hume and Mark Durkan, and narrowly won in 2017 by Sinn Féin’s Elisha McCallion.

The SDLP will look to make Sinn Féin’s policy of abstaining from Westminster a key issue in this contest, with Eastwood arguing that the voice of Northern Nationalism is needed on the green benches to counter-balance that of the Democratic Unionist Party (DUP) (though, given his party’s decision to enter into electoral pacts with Sinn Féin in other constituencies, as discussed below, this may be a hard sell).

Standing in Foyle is a big gamble for Eastwood, representing something of a watershed in his leadership of the party.

In the wake of the DUP’s humiliation at the hands of Boris Johnson, and the Prime Minister’s alleged ‘betrayal’ of Unionists in Northern Ireland – which has prompted a series of town-hall-style political meetings in Unionist and Loyalist areas in Belfast and beyond – there has been intense pressure on incoming Ulster Unionist Party (UUP) leader, Steve Aiken, to backtrack on his previous pledge to run a UUP candidate in each of Northern Ireland’s 18 constituencies, which would have risked splitting the Unionist vote in key marginal seats where the ratio of Unionist to Nationalist voters is balanced on a knife-edge.

According to some reports, in some instances, this pressure has included threats of paramilitary violence.

The upshot has been that the UUP will stand aside in Belfast North in order to give sitting MP and DUP deputy leader, Nigel Dodds, a ‘clear run’ against Sinn Féin’s John Finucane (who is currently serving as Lord Mayor of Belfast), against whom he won by a narrow margin of less than 2,000 votes in 2017.

For their part, the DUP will not be standing a candidate in the symbolically significant seat of Fermanagh and South Tyrone, which was once held by IRA Hunger Striker, Bobby Sands, and has fluctuated between Sinn Féin and the UUP in subsequent elections.

In their efforts to guarantee only one ‘Orange’ candidate in North Belfast, those Unionists who have pressured the UUP to withdraw may have miscalculated.

Despite having signalled his opposition to Brexit, Aiken has now ensured that the only Unionist candidate in the constituency will be an arch-Brexiter.

This has created the space and electoral incentive (and political cover) for Sinn Féin, the SDLP and the Green Party to engage in their own processes of pro-Remain pact-making, which have only intensified the electoral challenge now confronting Unionism.

The SDLP have signalled their intention not to stand candidates in Belfast North, Belfast East and North Down, in the hope that this will make it easier for other pro-Remain candidates to win in these seats.

Likewise, Sinn Féin have agreed not to stand against the Alliance Party leader, Naomi Long, in East Belfast, and to give the SDLP’s Claire Hanna a free run against the DUP’s Emma Little-Pengelly in the strongly pro-Remain seat of Belfast South (in which the Greens have also said they will not run).

Significantly, Sinn Féin also signalled their intention to stand down in the North Down constituency, in favour of a Unionist candidate: the staunchly anti-Brexit Independent MP, Sylvia Hermon – though the latter has subsequently announced that she will not be seeking re-election.

Efforts both to make and to represent this election as a de facto referendum on the constitutional question – or as an ‘Orange’ versus ‘Green’ sectarian headcount – have thus been complicated by the cleavage between ‘Leave’ and ‘Remain’, with unpredictable consequences.

As it stands, the pro-Remain Alliance Party has refused to enter into any electoral pacts.

It remains to be seen whether the party will be able to continue to ride the rising wave of support it enjoyed in the local and European elections earlier this year, and whether this might be enough for it to win against the DUP in key target seats like South Antrim.

The UUP’s Danny Kinahan (who held the South Antrim seat between 2015 and 2017) is also in contention to (re)take the seat, while in Upper Bann, the DUP will face challenges from both Sinn Féin and the Ulster Unionists.

The loss of any of its 10 seats (and it stands to lose at least two) would be a bitter blow for the DUP.

Following the unceremonious end of a confidence and supply arrangement with the Tories which was always likely to end badly, and in the wake of the recent publication of Sam McBride’s forensic account of the party leadership’s role in the ‘Cash for Ash’ scandal, it might also signal the injection of an unusual and welcome degree of accountability into Northern Irish electoral politics.

Greater representation of Northern Ireland’s pro-Remain majority at Westminster would also be a welcome development.

However, it is far from certain what impact this would have on the Brexit process, given its wider volatility and unpredictability.

By Jonathan Evershed, Postdoctoral Fellow in the Department of Government and Politics at University College Cork. This piece originally featured on the Centre for Constitutional Change blog.