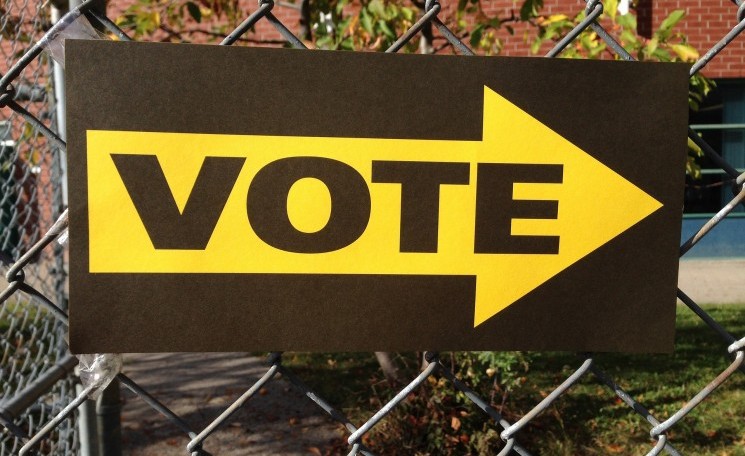 The Brexit election that the 2017 edition didn’t quite turn out to be, a battle about the NHS in December or perhaps a chance to unite the country and move on?

Exactly what the upcoming general election will end up being about is not yet clear.

What has been clear for some time is that the electorate increasingly connect with political questions, political parties and politicians through their own core political values.

The 2019 election seems unlikely to produce as large a two-party share of the vote as 2017. This means vote switching may be quite common as both the Liberal Democrats and the Brexit Party gain support.

Indeed, the British Election Study team have estimated that almost half of the electorate switched votes between 2010 and 2017.

Who switches, and in which direction, is closely linked to the values they hold, and these core values align along two key dimensions.

The first is an economic value dimension, which closely resembles our ‘common-sense’ understanding of left and right. The second is a social liberalism dimension, variously referred to as liberal-authoritarian or open-closed.

Using data from the British Election Internet Panel Study, we can look at how the values of the voters who intend to switch parties at the next election and compare with those staying loyal to their 2017 vote.

We focus here only on those who voted Conservative or Labour in 2017, and only voters in England as the dynamics of vote switching are different in Scotland and Wales (unfortunately the sample size doesn’t allow for the same comparisons to be made there).

The items used to measure each dimension can be found here.

They include attitudes to redistribution and big business on the economic dimension and attitudes to the death penalty, traditional values and censorship on the social liberalism dimension.

In each case people are asked to choose from five options, ranging from ‘strongly agree’ to ‘strongly disagree’.

These responses are aggregated and scaled so that each dimension runs from 0 to 10, with low values representing the ‘left’ and ‘liberal’ positions respectively.

The 2017 election saw a key divide between Conservative and Labour voters on their economic values, and this reflected the long-standing divide between the two parties.

However, in both parties their Leave and Remain supporters are also demarcated by their social liberal-conservative values. 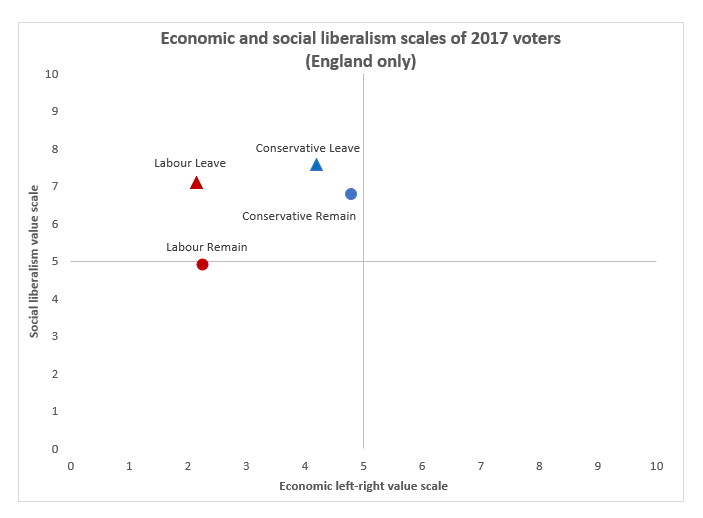 The most recent available data for vote intention in 2019 which also has these core value measures is wave 16 of the British Election study internet panel.

The data were collected after the May 2019 European Parliament elections and so do not capture more recent changes in voting intention – perhaps related to changes in party leaders.

Nonetheless the data do allow us to map where in this two-dimensional value space the voters who reported an intention to vote differently from 2017 are located. 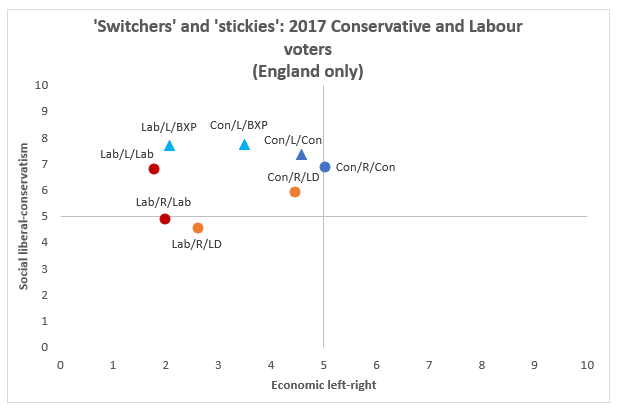 All groups of ‘switchers’ are located between the Conservatives and Labour in terms of their economic values, on this set of values the ‘switchers’ are more moderate than those staying with their 2017 choices.

This means that the value space is being further stretched – but along two dimensions, rather than a simple polarisation along a single axis.

While the social liberal-conservative dimension divides the Liberal Democrats and the Brexit Party more sharply than it divided Leave from Remain voters within parties in 2017.

What might this mean for the 2019 election? The Conservatives and Labour have already shown that they want to fight an election that is not only about Brexit.

The reasons for this are clear: their 2017 support is divided on Brexit, especially for Labour where the gap between their Leave and Remain voters on social issues is large.

Meanwhile, both the Brexit Party and the Liberal Democrats will focus their campaigns almost exclusively on Brexit.

Brexit Party supporters are the most socially conservative groups within the electorate, with no difference between those coming to the party from the Conservatives or Labour.

How the party pitches to these groups beyond Brexit itself remains to be seen.

The dangers for the Liberal Democrats are greater.

While they are capturing the more moderate aspects of the other party votes in terms of economics, there is nonetheless a large gap between those voters coming from the Labour Party to the Liberal Democrats and those coming from the Conservatives.

Where the campaign is fought on economic issues of taxation, public ownership and public services it will be more difficult to hold this coalition of voters together.

These core values are critical for thinking about how voters may switch between parties over the next five weeks. Voters who seem distant from a party on one axis may share much with voters in other parties on the other dimension.

The faint pathways between parties, trodden by some during the European Parliament elections may become more solid as the campaign progresses and the shape of the contest becomes clear.

By Paula Surridge, senior lecturer in political sociology at the University of Bristol.