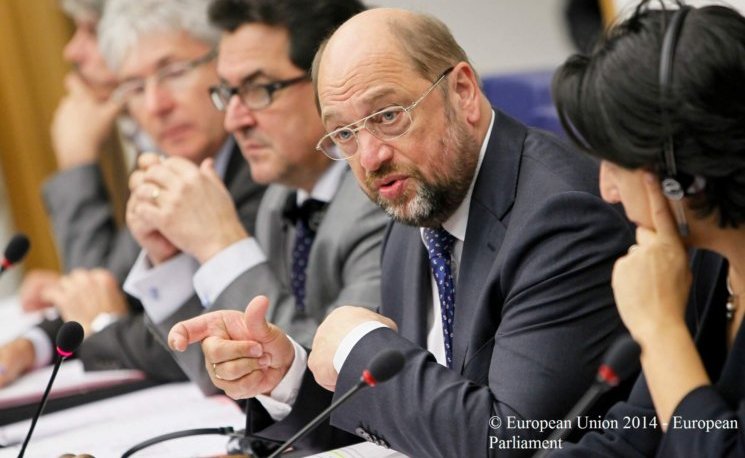 When Martin Schulz resigned as president of the European Parliament to return to German politics, many British saw that as removing an opponent of Foreign Secretary Boris Johnson’s goal of the UK having its cake and eating it too, that is, gaining generous special terms when it leaves the European Union. The bad news is that Schulz is not leaving European politics. On Sunday he was named leader of the German Socialist Party (SPD) and will be the chief challenger of the current Chancellor, Angela Merkel, at the German election in September.

Even if Angela Merkel succeeds in maintaining her Christian Democratic Union (CDU) as the largest group in the German Bundestag, she will need to form a coalition in order to retain office as Chancellor because the country’s proportional representation system prevents any party from gaining an absolute majority.

As the second largest party in the German Bundestag, the SPD is the only coalition partner available to the CDU. Both parties are almost certain to lose seats in the Bundestag to the anti-immigration Alternative for Deutschland, but remain large enough to form another coalition government. In that case Schulz will be in line to receive the post of German Foreign Minister, normally reserved for the second partner in a coalition. This will make him a major voice in Parliament and in discussions with Angela Merkel about how the German government responds to British demands for EU concessions.

If Schulz becomes Germany’s new foreign minister, he will meet his British opposite number at regular meetings of the EU’s foreign secretaries. He can offer Boris Johnson a piece of Black Forest cake and ask BoJo to demonstrate his trick of eating the cake and still having it on the plate. If he can’t work his magic, then Schulz can eat the cake himself and leave BoJo with nothing but an empty plate to show for his too clever by half comment.

Of course, Schulz may not become foreign minister: he may end up as the head of a left wing German coalition government. This could happen if a combination of SPD, Green and Left parties MPs gain a majority of seats. The SPD would then have a choice of remaining a junior partner of Angela Merkel or taking control of government. Choosing to form a left-wing coalition government would satisfy many SPD members who have felt the loss of power and votes as a junior partner in Merkel’s CDU-led government.

If Schulz became Chancellor then BoJo would be saved an embarrassing encounter demonstrating that his magic only applies to words, not real objects. As Chancellor, Schulz would then be Theresa May’s opposite number. Moreover, his presence would be the biggest presence in meetings of the European Council, where 27 heads of EU member states will decide what terms, if any, the EU will offer for Britain’s post-Brexit relations with Europe.

How likely is it that Schulz could replace Angela Merkel?  Opinion polls currently show the total vote of three left parties averaging at the same level as the combined vote of the CDU/CSU plus Free Democrats. The complexities involved in awarding seats in a German electoral system, plus the complexities of arriving at a coalition pact needed to form a government, make it impossible to forecast the outcome. It’s too early to tell. At the moment, Schulz has less of a chance of becoming Chancellor than Merkel has of remaining Chancellor. On the other hand, his chance appears better than that of Donald Trump a year ago.

Downing Street has been working on the assumption that Theresa May will be dealing with Angela Merkel throughout the Brexit process. It is possible that this could produce a ‘pig’ of a Brexit compromise that would satisfy both sides. British negotiators could bring home enough bacon to satisfy meat-eating Tories while leaving lots of Black Forest ham on the table to satisfy hefty German appetites.

It is easy to deal with any Downing Street spokespersons claiming with certainty that Angela Merkel will remain the friendly face backing Britain in EU deliberations next winter. Just ask them: How is Theresa May getting on with President Hilary Clinton?

By Professor Richard Rose, author of Representing Europeans: a Pragmatic Approach and a commissioning fund awardee of The UK in a Changing Europe. It updates a blog he posted on this website on 29 November captioned:  “Another Nail in the Coffin of a Soft Brexit?”