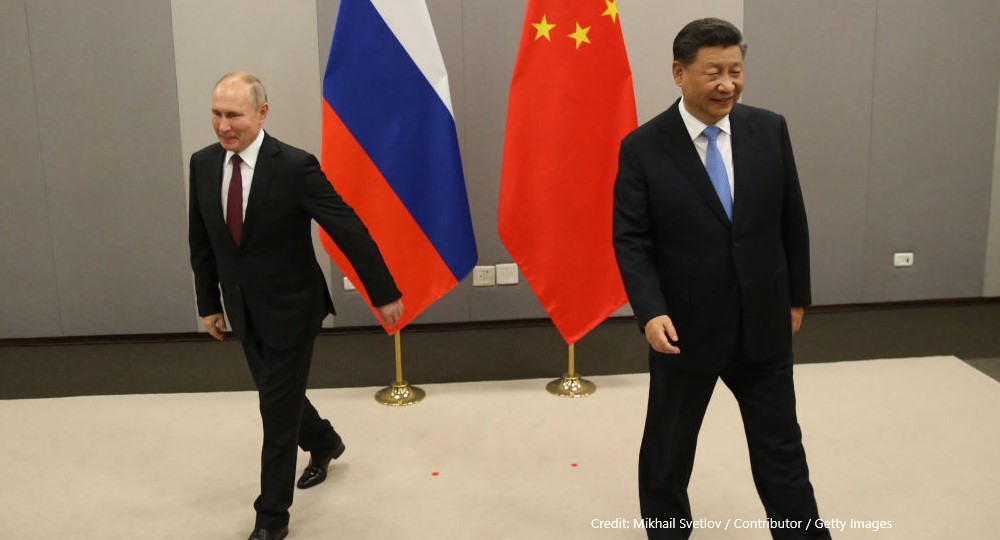 Xavier Romero Vidal, David Evans and Roberto Foa set out the findings of their recent report which shows how public perceptions of Russia, China and the US have changed over the last 10 years, coalescing into two groups – one of which is increasingly hostile towards Russia and China and the other which views the countries more positively.

The Russian invasion of Ukraine has galvanised the world: western countries have supported Ukraine and imposed new sanctions on Russia, while a substantial number of countries have chosen to remain neutral or offer their tacit support.

In our recent report, A World Divided: Russia, China and the West, we show that differences in the reactions of states and international organisations reflect a deep divide across societies around the world. For this study, we track how views of Russia, China and the United States have changed in the last decade by analysing data from more than 30 survey projects covering a total of 137 countries.

On the other hand, among the 6.3bn people living in the non-democratic regimes that are found primarily across continental Eurasia, the Middle East and the west of Africa, 70% feel positively towards China, and 66% towards Russia. For the first time, we find that slightly more people in developing countries (62%) are favourable towards China than towards the United States (61%). 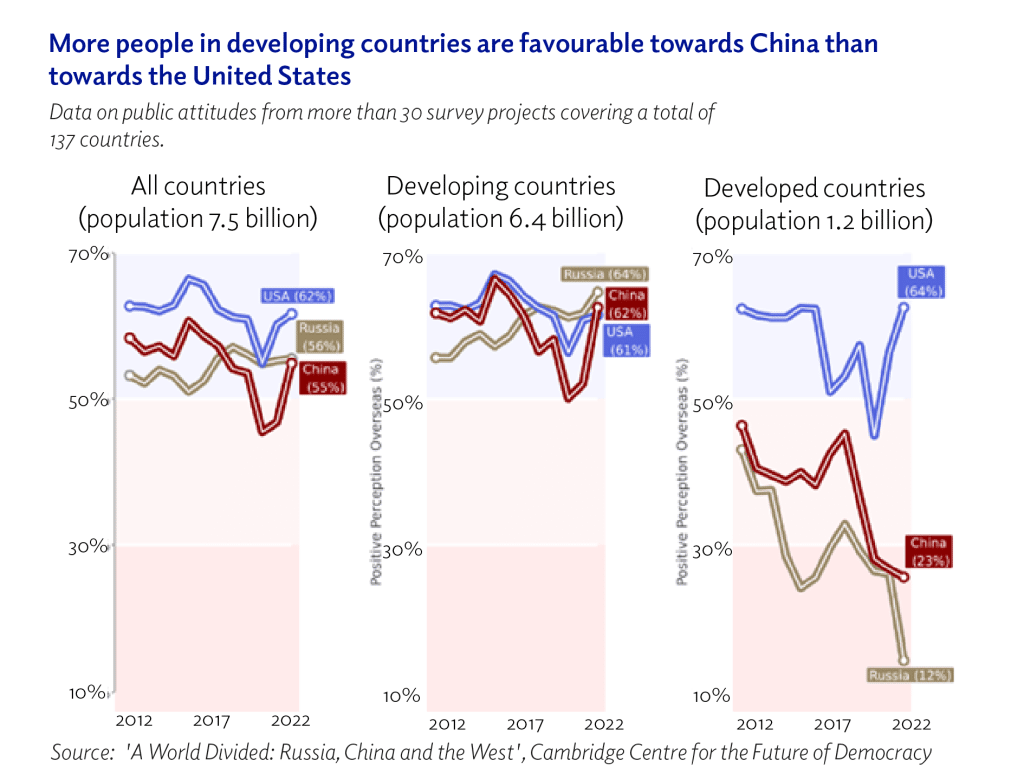 These two groupings are not only diverging in their sympathy (or animosity) towards the US or China, but also in their political regimes and cultures.

The western-oriented world constitutes a ‘maritime alliance’ of democratic societies that emphasise individual freedoms and social liberalism, and in which a majority prefers American hegemony. This maritime alliance includes both the European Union and the UK, together with the Americas and Australasia.

In opposition to this cluster, a ‘Eurasian Bloc’ is anchored by China and Russia, with links across the continent to Central Asia, Iran and the Arab Middle East, as well as large parts of Africa and Southeast Asia. Most of these societies currently live under autocratic regimes and hold more conservative values with respect to secularism, women’s rights, or sexual diversity.

Thus, we find a clear association between the degree of liberal democracy in a country, and how its public feels towards Russia and China. In this figure, we show the correlation between the Index of liberal democracy (estimated by the V-Dem project), and average public views towards Russia and China (percentages ‘unfavourable’). 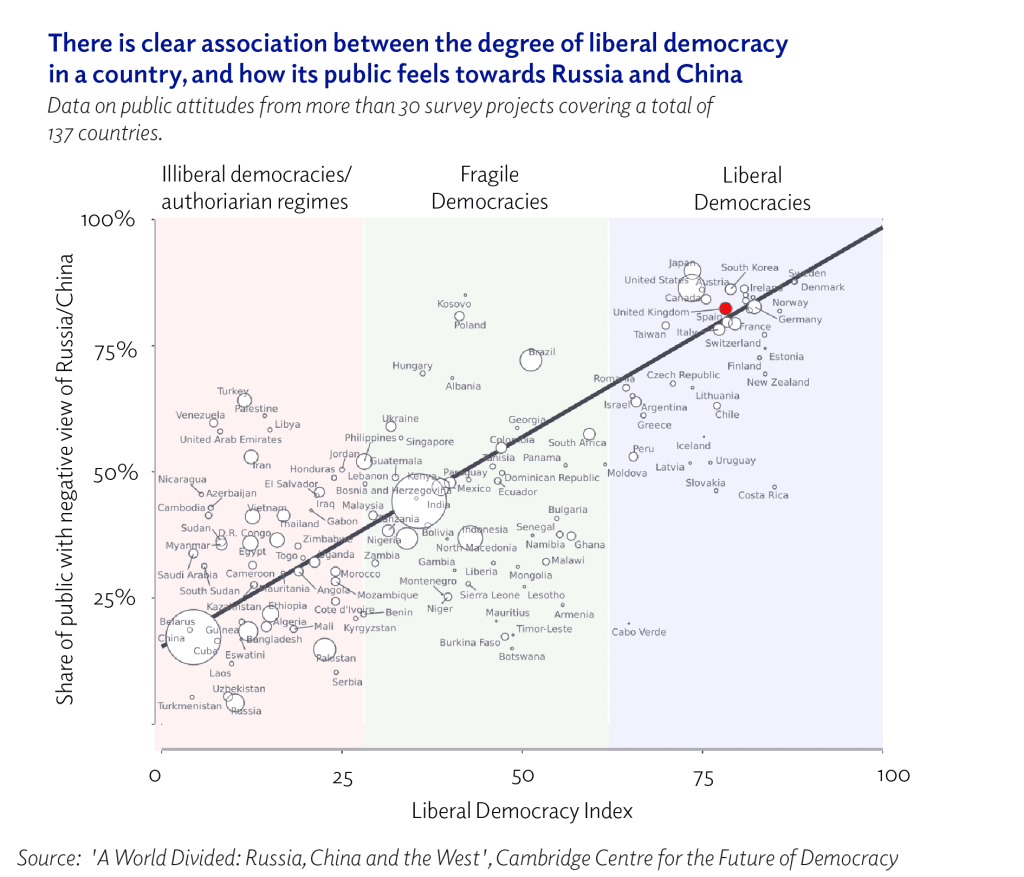 This global divide has been at least a decade in the making, but the war in Ukraine has exacerbated and altered some regional equilibriums.

The war damaged the popularity of Russia across all European countries, but to a larger extent in the countries that had remained sympathetic to Russia. As a result, EU citizens have converged around a more critical position vis-à-vis Russia, in line with the British public, where animosity towards Russia was high even before the war.

This development has created an interesting dynamic between the UK and the EU. Since leaving the EU, British rhetoric on foreign policy has focused on opening trade and diplomatic relations with other parts of the world and eschewing Europe. However, this deepening world divide has seen Britain and the EU fall on the same, liberal ‘maritime alliance’ side of this divide and thus bind the UK closer, in diplomatic terms at least, to the EU.

The increased importance of NATO as a military representative of this bloc will also bind Britain’s foreign policy increasingly alongside the EU. UK support for China in 2022 (25%) and support for the US (63%) are very similar to EU countries like France, Belgium, Netherlands, and Spain. The popularity loss of Russia among formerly sympathetic Southern and Eastern European countries has resulted not only in convergence among EU member states but also between the EU as a whole and the United Kingdom.

These ties to Europe, and the polarisation of the world into two blocs will potentially prevent Britain from meaningfully pulling away from the EU diplomatically.

Our report suggests that the current global divide cannot be reduced to simple economic interests or geopolitical convenience. Rather, our findings show that the strongest predictors of how societies align respective to China or the US are their fundamental values and institutions – including beliefs in freedom of expression, personal choice, and the extent to which democratic institutions are practised and perceived to be legitimate. Since the UK and the EU share these values, they have strong incentives to continue working together in the global arena.