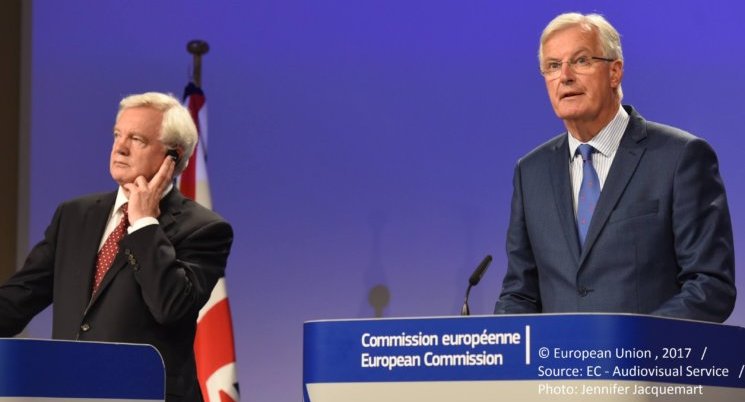 A picture, they say, paints a thousand words. And a recent—much discussed—photo certainly seemed to bear this out. A shot of David Davis sitting opposite his EU counterparts at the launch of Brexit negotiations on 17 July caused something of a twitter storm.

Conservative columnist Fraser Nelson hit out at the amount of paperwork EU officials had taken to a welcome meeting. Others moaned that the picture revealed the UK’s lack of preparation, a claim taken up in a piece in the Guardian, while the Huffington Post went to town on David Brent comparisons.

Clearly, the picture itself told us nothing whatsoever about the government’s preparedness or otherwise for Brexit. But it has contributed to an increasingly widespread notion that the UK is simply not ready for the negotiations and their aftermath. Michel Barnier’s comments that there had been “no decisive progress” in the latest round of talks did little to dispel the concern. At the core of this discussion is a question mark over the preparedness of the machinery of government to handle this gargantuan task.

Britain’s ability to negotiate depends on a number of things. Some of these are beyond our control. In essence, the European Union is following a tried and tested formula. It has vast experience of negotiating with third parties. In contrast, this is a wholly new experience for the UK.

No country has left the EU before, so it is hardly unreasonable that, to date, the British approach has been somewhat hesitant. We can expect this to change as the negotiations progress. And, indeed, London has begun to publish a series of position papers designed to spell out what it is seeking to achieve.

Even these, however, have led to much criticism about the government’s unrealistic claims. And it is not clear whether these are papers intended to assuage public concerns or to set the parameters for the talks. The papers on Ireland and the customs union certainly smacked of the former.

But does this mean that Britain is simply not up to the task ahead? Key to the success of the undertaking will be the civil service. And Brexit represents, in the words of the Cabinet Secretary, a challenge for that service with few, if any, comparisons in terms of its complexity.

To set this in context, the British civil service has an unparalleled track record when it comes to dealing with the European Union. As a member state, Britain provoked envy for the way that Whitehall dealt with EU business. While the British themselves never realised it, the UK was routinely hailed as the most effective member state when it came to shaping what the EU did.

By the early 1990s, it was commonplace to hear French diplomats complaining about the “Anglo-Saxon Europe” that had emerged. Pragmatism and proactive alliance building were both key to this success as, incidentally (though frequently unreported) was a willingness to compromise.

A significant body of academic literature has underlined the effectiveness of what came to be recognised as a “Rolls Royce” British administration, both in London and Brussels. A number of factors were routinely identified as enabling the UK to coordinate its positions and defend them effectively in EU negotiations. Indeed, one of the arguments used against Brexit was precisely that our negotiators exerted so much influence in Brussels, and we would lose that power if we moved outside the club.

So what, if anything, has changed? Structurally, quite a lot. Following the referendum, Theresa May took the decision to create two new departments—the Department for Exiting the EU and the Department of International Trade. The speed with which the former, in particular, was up and running and operational was certainly impressive. DEXEU now has a staff of some 450—not enough to run Brexit alone, but more than sufficient for its role as a department that coordinates hundreds of work streams across Whitehall.

Jeremy Heywood, Head of the Civil Service, has provided some details on other steps taken to ensure that the civil service is adequately resourced. DEFRA, 80 per cent of the work of which is bound up with EU regulation, has brought in an extra 400 staff members. The department of Business is still recruiting. To date, the Treasury has agreed £400 million in extra resources to assist the civil service in coping with Brexit.

A lack of manpower is not in and of itself, then, necessarily a problem. During one previous round of negotiations there were some 100 British negotiators in Brussels—it’s probably safe to assume that they had their papers with them. It is not obvious that Britain lacks the “expertise and the staff’ for the Brexit process.

Nevertheless, whatever the number and quality of civil servants charged with ensuring a successful Brexit, the system is coming under strain for several reasons.

First, the new structures the prime minister decided to put in place have caused some problems. A traditional strength of the British civil service when dealing with the EU was that it did not suffer from the kinds of fragmentation between ministries that characterises others states. In France, to take but one example, the influence of the grands corps, drawn from the different elite schools charged with training the leadership of the French state, often led to rivalry within and between departments.

Anecdotal evidence suggests that information sharing in Whitehall has not been what it once was. Clearly, the creation of new departments out of thin air has created a significant amount of political churn. Officials complain in private that information sent to DEXEU is not always acted upon, while disappointingly little flows the other way.

In retrospect, beefing up the European and Global Issues Secretariat (EGIS) in the Cabinet Office, which used to coordinate EU policy, might have been preferable to setting up a whole new structure. Not least, this would have made prime ministerial authority over the system much clearer.

A second traditional advantage the British state used to enjoy over some of its continental partners was the fact that the UK was a unitary state with strong political and administrative control exercised by London. Centralisation simplifies the task of coordinators, avoiding the problems of federal states like Belgium, where the central authorities are literally not allowed to speak in EU negotiations if consensus between the regions is not achieved.

But, of course, the UK is less unitary than it once was. Devolution has seen significant powers flow to the devolved authorities. And this will cause problems for the civil service as the Brexit negotiations proceed. One example that has been written about recently is agriculture.

The existence of different subsidy and regulatory regimes in the four home nations will make the negotiation of a trade deal extremely problematic. The only way to ease it will be the imposition by London of a common framework, something the devolved administrations will at best dislike and at worst resist. The net result will be to make a difficult task still more complex.

Third, while the Treasury is allowing those departments most affected by Brexit to hire more staff, this will nevertheless take place in the context of falling civil service numbers overall. The civil service is already the smallest it has been since the second world war. Austerity has hit the service hard, with numbers reduced from 480,000 full time staff ahead of the 2010 spending review to 406,000 in March 2015.

Clearly, this will impact what can be done apart from Brexit. And making Brexit work will require reform in other areas. New education policies, to take but one example, could help to plug any skills gap that might be a side-effect of a new immigration policy. It seems unlikely in the current context that the civil service will have the bandwidth to act decisively in such an area.

And beyond the administrative problems, there is the politics. Another comparative advantage that the UK enjoyed over its continental partners was its tradition of governance via stable, single party governments. Those days seem long gone. And the debilitating impact of our new politics is wide ranging.

For one thing, managing parliamentary business with a minority government will be complicated and time consuming. Passing the Withdrawal Bill and ensuring that all EU law is successfully incorporated into the domestic statute book would be a difficult task under normal circumstances, and the government’s weak position will make it still more so.

Nor have parliamentarians, to date, been overly sensitive to the danger of overload in Whitehall. During the last parliamentary session, the Institute for Government counted 31 parliamentary enquiries in the Commons and the Lords, and pointed to the dangers that these became “a chaotic competition for the limelight.” Although parliamentary scrutiny of government is undoubtedly vital, this competition again adds to the already overburdened civil service agenda, as ministers are obliged to respond to reports from these committees within sixty days.

By far the biggest problem, however, is the government itself. Tensions between civil servants and politicians first burst into the open with the resignation of the UK’s permanent Representative to the EU, Ivan Rogers, in January. His letter to his staff, calling on them to challenge “ill-founded arguments and muddled thinking,” was widely interpreted as a criticism of the government’s reluctance to accept advice. A recent story that mandarins were trying to railroad decisions through while ministers were away on holiday implies that relations between civil servants and the government are still not all they could be.

This would generate problems under normal circumstances, but the current state of affairs is far from normal. For the government itself, not to mention the ruling party as a whole, appears profoundly divided. Recent public spats between ministers over transitional deals were merely the latest in a long line of disagreements over what Brexit should ultimately mean. This hardly helps an administration struggling to prepare both for the negotiation and the implementation of any final deal.

The British civil service has long—and rightly—been hailed as one of the best administrative services in the world. Within the EU, its record of dealing with European business has generated envy in other capitals. But Brexit presents unprecedented challenges and contains dangers which might impact on our system of government well beyond March 2019. Most obviously, any erosion of trust between the administrative and the political branches will impact on their ability to govern this country.

Based on the available evidence to date, however, the bulk of the blame lies on one side of this equation. There’s little point having a Rolls Royce if it is driven by drunks.