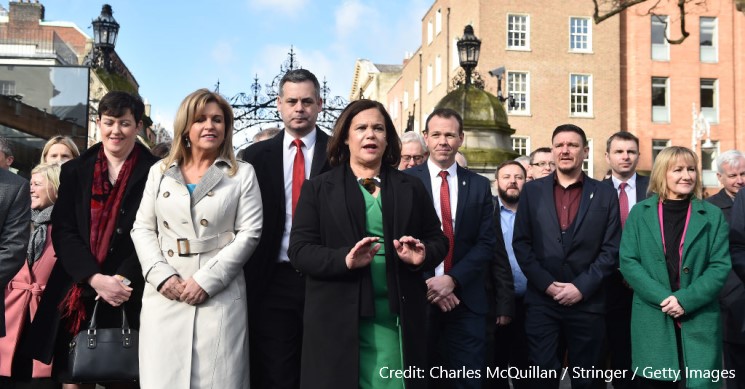 Close to six weeks after the general election in Ireland, and as the country struggles with the spread of Covid-19, efforts to form a government have gathered pace after a glacial period of non-negotiation.

Of the 160 seats in the Dáil Fianna Fáil won 38, Sinn Féin 37, Fine Gael 35, the Greens 12, Labour 6, Social Democrats 6, Solidarity / People Before Profit 5, and a range of differing independents 21. Given this allocations of seats, there were two plausible routes to a government, and one rather implausible one.

The first plausible scenario was a coalition of Fianna Fáil, Sinn Féin, and either the Greens or a number of independents. Fianna Fáil’s difficulty with this option was what we might call the Micheál Martin dilemma. Could the party’s leader since 2011 plausibly lead it into such an arrangement? After all, he had spent all his political career criticising Sinn Féin, and had flatly refused to enter government with them prior to the election:

It would certainly have been easier for Fianna Fáil to enter such a coalition with a new leader. Fianna Fáil never envisaged a scenario where it would lose seats in Martin’s third election as leader, and those in favour of coalescing with Sinn Féin could have used this eventuality to force him out. It would also, however, have led to a huge schism in the party.

It was theoretically possible to replace Fianna Fáil with Fine Gael in this scenario but there was really no chance of this happening. The election was a rejection of Fine Gael in government and it was impossible to see Sinn Féin working with it given this outcome. Likewise, there was no way that Fine Gael would serve as minor coalition partners to Sinn Féin, so this was ruled out almost immediately.

The second serious option was that Fine Gael could go back into government with Fianna Fáil and either the Greens or a number of independents. This would see Sinn Féin excluded from government much to the fury of all those who voted for it in the expectation of it finally entering the corridors of power in Dublin.

This scenario ran against the mantra of change that dominated the election, but it is not only Sinn Féin which has a mandate from the electorate. The problem is that this government would only have the support of 50 per cent of the voters, and it would constantly be attacked for having no real mandate out of the ‘change election’.

The political danger in this coalition is that it could lead to Sinn Féin using its status in opposition to grow its support base yet further, to the point where it wins large numbers of seats in the next election. It would also be very difficult for Fianna Fáil and Fine Gael to differentiate themselves from each other while in government.

The implausible scenario was a Sinn Féin led government. There are 87 non Fianna Fáil and Fine Gael deputies in the new Dáil, so the numbers are there for Mary Lou McDonald – the Sinn Féin leader – to become Taoiseach. It would, however, have been an act of herculean proportions if she pulled it off.

A Sinn Féin-led left-wing alliance consisting of the Greens, Labour, the Social Democrats, Solidarity/People Before Profit, and a variety of left wing independents could probably get to 75. Labour, however, immediately removed itself from this option and just a week after the election Sinn Féin themselves said it could not be done.

Some way to go yet

Despite returning with a barely believable 38 seats, when some political commentators had them winning over 60 prior to the election, it is clear that any new government will have to include Fianna Fáil.

As Micheál Martin had ruled out coalition with both Sinn Féin and Fine Gael before the election, government formation is proving to be very difficult. Martin had assumed that he would have enough seats to form a government with the Greens, Labour, and some independents. The fact that the election was so disastrous for Fianna Fáil scuppered that plan.

Disputes have broken out within Fianna Fáil about whether to seek a coalition with Fine Gael or Sinn Féin. Neither is palatable, but there is no other option as Fine Gael have resolutely ruled out offering to support Fianna Fáil in a confidence and supply arrangement. For their part Fine Gael continue to insist that as they finished third in the election it is incumbent on Fianna Fáil and Sinn Féin to coalesce and form a government.

Over the past few weeks Sinn Féin have had discussions with some of the smaller parties but have made no progress in forming a left-wing government, and it is clear that they cannot do so. Neither Fine Gael nor Fianna Fáil will talk with Sinn Féin so there are now only two options. One, notwithstanding Fine Gael’s protestations, is the Fianna Fáil/Fine Gael/Independents coalition and the other is some sort of national government.

For now, the outgoing government remains in place. The Green party have called for the creation of a government of national unity to deal with the Coronavirus crisis with cabinet seats allocated under the D’Hondt system. This has been rejected by Fianna Fáil, Fine Gael, and Sinn Féin.

Fianna Fáil and Fine Gael have met and both have appointed negotiation teams to discuss a programme for government. While there seems some sort of inevitability that the two parties will coalesce there is still much work to be done. The Greens have said that they will not serve in such a government and remain wedded to the idea of a national government. Furthermore, Fianna Fáil has a requirement that if it is to go into government it must be approved by a special members’ meeting, an ard fheis, in which every member of the party is entitled to vote.

Likewise, under Fine Gael’s rules, a special delegate conference must be held to ratify the decision. There is significant grass roots opposition in both parties to coalescing in what would be an unprecedented alliance. That alliance will also need a strong third component if it is to last a full term, and the independents will clearly drive a hard bargain. In that context government formation is likely to take some time yet.

By Gary Murphy, Professor of Politics at Dublin City University.