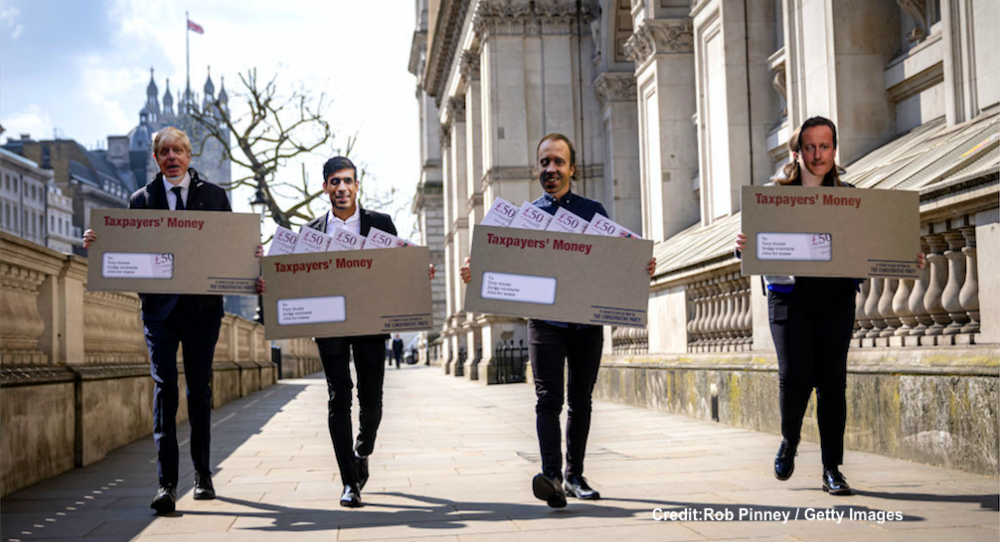 A month into the 2017 general election campaign, Nick Robinson and the Today programme conducted a focus group in The Old Cock in Halifax.

Theresa May’s campaign phrase ‘Strong and Stable’ had completed the transition in Westminster from being lauded as genius, to boring the pants off the political journalists following her campaign bus emblazoned with the slogan, to being the subject of ever-increasing ridicule as May’s popularity faltered.

No one sitting around the pub table in Halifax had even heard the phrase.

What achieves ‘cut through’ and enters the public consciousness, and which stories remain confined to the ‘Westminster bubble’, is part of the art and alchemy of politics.

Having an eye for the difference between what gets voters excited and what makes people in Westminster excitable is key to successful political communications.

A key question for both Labour and the Conservatives is where the Cameron/Greensill affair – and the accusations of ‘Tory sleaze’ that have followed – falls on that excited/excitable spectrum.

Have most voters spent the weekend sitting next to a patio heater at The Old Cock discussing Lex Greensill’s business card? Can it turn the political tide for Keir Starmer before May?

Or, as the parliamentary inquiries begin today but the news agenda has moved on, is it still a story that relatively few voters have noticed?

For all those not able to rely on well-attuned political antennae, there is always data to fall back on. Over the past few years, YouGov have occasionally asked voters about how closely they are paying attention to a story in the news.

They give respondents five options: very or fairly closely, not closely, they’ve heard of it but aren’t following it – or they haven’t heard of the story at all.

The use of the question by YouGov has not been systematic – for example, the company used a different question to measure the Cummings/Barnard Castle Affair – but it provides some data that allows us to compare the numbers following the Cameron/Greensill story to a range of other issues that have made the news.

Some of these stories were not overtly party political –  for example the allegations made to Prince Andrew surrounding his friendship with Jeffrey Epstein.

Others – the creation of the Independent Group – were formed in the corridors of the House of Commons. 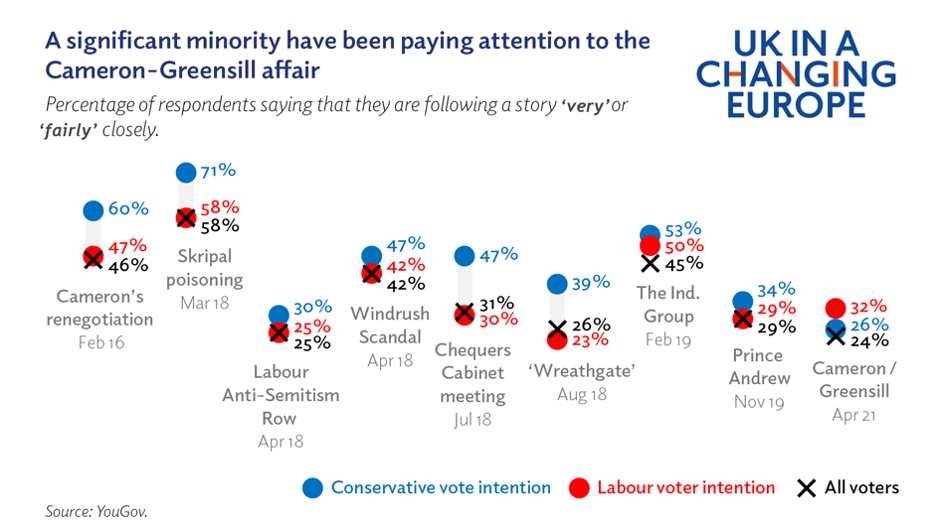 YouGov’s data show the Greensill Affair, as of just over a week ago, had clearly piqued the interest of a significant minority of voters. Yet, so far at least, it is not A-grade political news.

It is the only story in our league table of political stories in which Labour voters – disproportionately younger voters, who are generally less likely to say they are following any particularly issue closely – say they have been more interested than Conservatives.

This gives some hint that the story and the charge of ‘Tory sleaze’ has not – yet – come to have the damage Labour that may hope for.

Overall, 24 per cent said they had been following closely – similar to the attention paid when, throughout 2018, YouGov asked the public about the various anti-semitism crises that engulfed the Labour Party

Much has been made of the anti-semitism problem as the issue that defined Jeremy Corbyn in opposition.

Yet some commentators have pointed to other moments that triggered a decline in Labour’s support. Gabriel Pogrund and Patrick Maguire’s account of the Labour Party, for example, argued the Labour leader’s ambiguous reaction to the Skripal poisoning was a defining moment.

Stephen Bush has argued that the creation of the Independent Group – despite fizzling out within a year – was a genuine turning point in the politics of the 2017-19 Parliament.

This data gives succour to both those theories, and defies a couple of pieces of common wisdom in Westminster.

First, that voters are often uninterested in matters of foreign policy – the Skripal poisoning and subsequent fallout was by far the most noticed story YouGov measured.

Second, that the public and have little time for the machinations of politicians in Westminster.

Despite maybe being thought of as an archetypal ‘bubble’ story, two years ago nearly half of the public were closely following what Chuka Umunna’s burgeoning political party was up to.

Whether the lobbying scandal makes the transition from B to A-list remains unknown – and given the snowballing nature of the story, its position on YouGov’s league table could change.

The one thing for sure, though, is that it will be voters like the good folk at The Old Cock will decide.

By Dr Alan Wager, Research Associate at the UK in a Changing Europe. This piece was originally published in The Times.