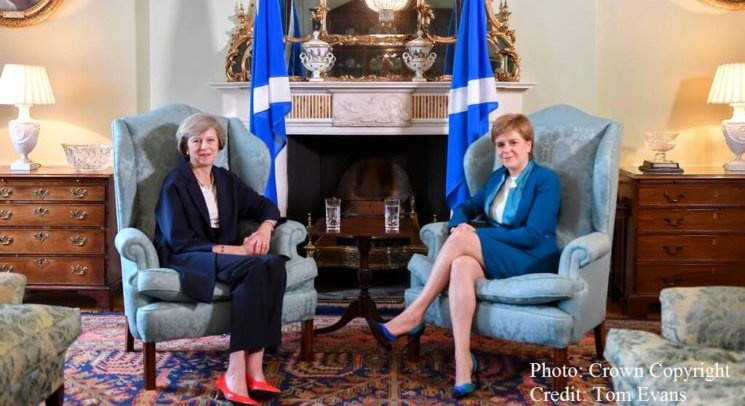 Brexit need not have led to a second Scottish referendum. But the UK Government’s policy of ever harder Brexit, without so much as a vote, raises issues of political legitimacy north of the border. The Scottish Government faces daunting economic hurdles to convince its electorate. But if we have learned one thing over the last year, the feeling of exclusion can override economic logic.

Brexit is first and foremost an issue of UK sovereignty. Since sovereignty is a reserved power of the Westminster parliament, there cannot be a serious question about the legality of the Brexit vote as an outcome for the whole of the UK.

However, the political legitimacy of the Government’s post-Brexit policy without a meaningful discussion is a different matter. The Government’s policy may contravene powers devolved to sub-central parliaments. For example, agriculture and fishing are devolved to the Scottish parliament. Yet the Government seems intent on negotiating a comprehensive free trade agreement for the whole of the UK.

The Government’s post-Brexit policy also looks at odds with preferences in Scotland. As with all trade policies, the biggest effect is always to create winners and losers. But winners and losers are not evenly spread across the UK. A unilateral reduction in tariffs (perhaps to zero) on manufactures, textiles, beverages and farming will be felt more in Scotland than the rest of the UK.

The First Minister has also been astute about timing. The Prime Minister cannot accept a referendum before leaving the EU for all sorts of legal and administrative reasons. Suppose one wanted to stay in EU but remain in the Union: how would one vote before Brexit is completed? A rejection of the Scottish Government’s demands might garner further support.

Holding another referendum just after Brexit has political advantages. It will come after months of unappealing wrangling against a near impossible deadline to achieve a meaningful agreement. Since the UK would be outside the EU, this would avoid the Spanish objection of extending membership to a separatist region.

Yet the economic challenges of independence are at least as great after Brexit. Even if an independent Scotland were to copy Norway and join the European Economic Area outside of the customs union this would surely lead to some form of border and rules of origin would apply. Since the UK wishes to pursue its own trade policy, Scotland would presumably have to follow or create an even more substantial border.

Then there is the fiscal situation. According to the latest official GERS report for 2015-16, a separate Scotland’s fiscal deficit, including a geographic share of North Sea oil, would have been 9.5% of GDP – much higher than the UK deficit of 4%. Current arrangements allow Scottish public spending to be £1,200 per person higher and tax revenues to be £400 per person less than the rest of the UK. The Scottish Government will need to address this shortfall.

And then there is the issue of which currency an independent Scotland would use. Use of sterling on a cooperative basis cannot be assumed. A bold choice would be to go for the Euro on a short time scale and negotiate a bridging agreement with the UK in the interim. But this would require a radical transformation of Scotland’s fiscal position. It is also questionable whether joining the Euro is a vote winner.

The alternative would be for Scotland to re-instate its own currency. Based on the Scottish Government’s experimental national accounts, there is an estimated trade deficit of nearly 7% of GDP. Given how many of Scotland’s businesses are owned by outside shareholders, the current account deficit is surely larger. Introducing a new currency with twin deficits approaching 10% of GDP and the likelihood of trade frictions with by far the biggest trading partner is ambitious.

Independence would also be an economic challenge for the rest of the UK. Trade frictions with Scotland and Ireland would damage its economic prospects. While the rest of the UK may save a fiscal transfer to north of the border, Scotland cannot repay its share of UK public debt any time soon. The best the UK could expect is an IOU. This would mean the remaining UK’s debt burden would be at least 10% higher. Then there is the UK’s international reach when possibly reduced to being England and Wales.

Perhaps the answer is for the UK Government to follow a more consensual approach to its post-Brexit policy. This should at least start with identifying who might be the winners and losers from policies. Last week the House of Commons International Trade Committee also recommended that the UK evaluate the policy of re-joining the European Free Trade Association.[1] This may be the basis of a more consensual approach for the whole of the UK.

By Dr Angus Armstrong, senior fellow at The UK in a Changing Europe. This piece originally featured on NIESR.