Has Brexit changed the relationship between elections and house prices? 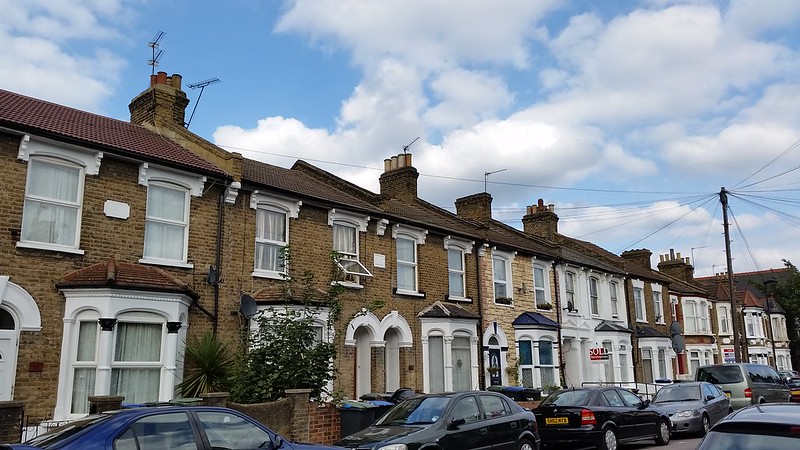 Political divides in the United Kingdom have traditionally been tied to location.

The Conservatives have been stronger in wealthier areas: for example London suburbs, market towns in the Home Counties and prosperous rural areas.

Labour, by contrast, found its core constituencies in now-declining industrial areas, the inner cities, and in small, largely working-class towns.

Yet, in recent elections that’s not how the debate has carried on.

The Conservatives have made increasing paeans to the ‘left behind’ in small and medium-sized, often post-industrial, towns and have criticized metropolitan elites.

Labour, especially under Jeremy Corbyn, appear to be gathering strength in many of London’s wealthiest neighborhoods, prosperous university towns, and even in well-to-do suburban regions.

What’s going on, and what happened? Has the class divide in Britain – at least as represented by differently wealthy places – really dissolved?

Brexit happened. One of the defining patterns in the geography of the Brexit referendum vote was that support for Leave or Remain cut across traditional Labour and Conservative strongholds.

In recent work with David Adler, we analysed the pattern of support for Leave in the EU Referendum of 2016 at the local authority, and where possible, ward levels.

Across every region of the country we found that local authorities or wards with higher house prices tended to be more likely to support Remain.

This is true within both wealthy local authorities such as Cambridge and poorer ones such as Wakefield. It’s true even in big cities such as London and Bristol. 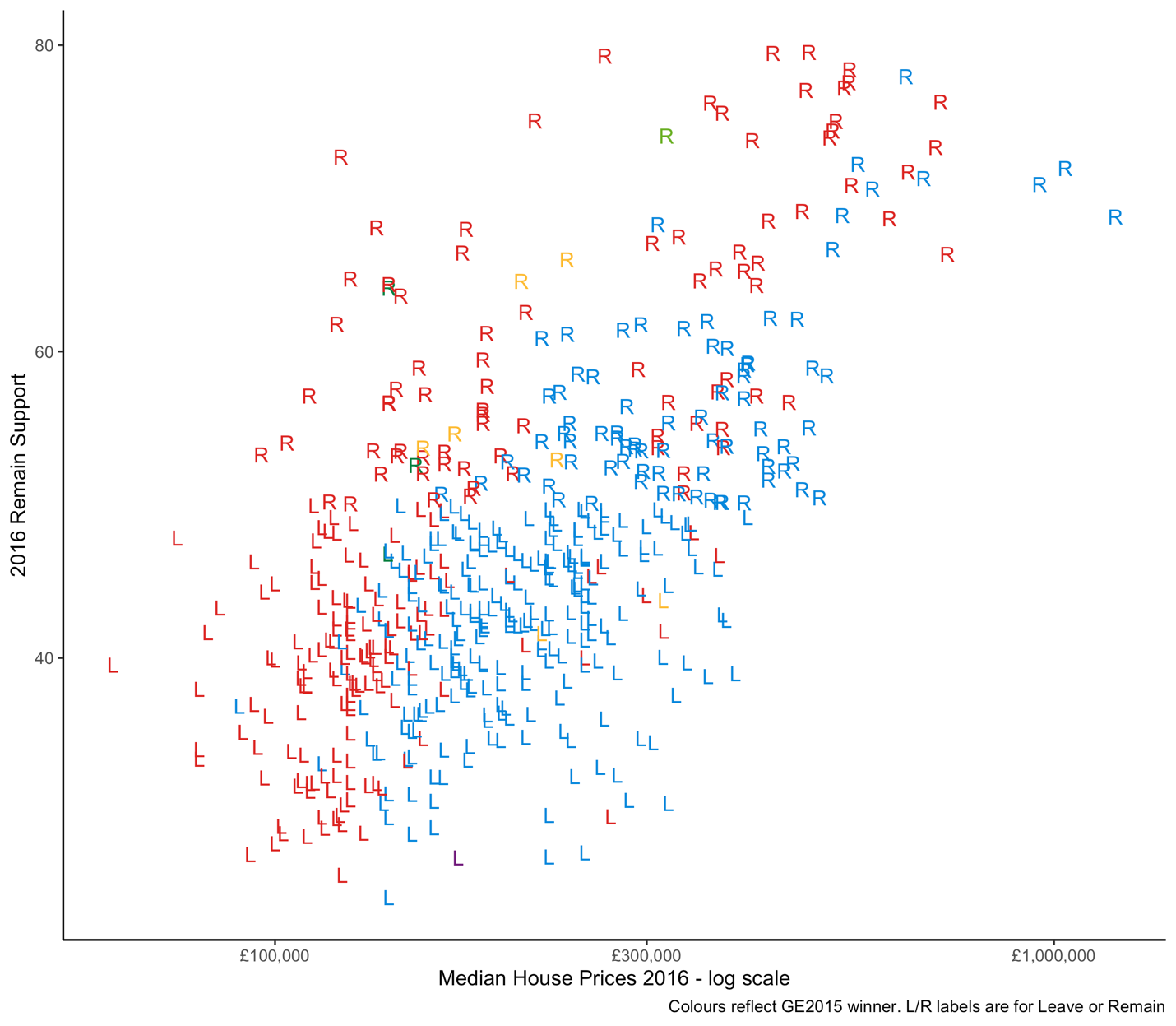 We can see a strong positive relationship between house prices (which are logged to make sure we are not giving Kensington and Chelsea too much weight!) and votes for Remain.

Indeed, house prices alone explain around forty percent of all variation across constituencies in how they voted in the referendum.

Why? We argue that house prices have both a direct effect on people’s satisfaction with the economic and political status quo – after all, higher house prices do literally make people richer – and an indirect effect, inasmuch as they represent how much society values the place where people live.

What is a better reflection of how other people value your hometown than how much they would pay to live there? And people feel this as a judgment on the relative social status of where they live, how respected they are by others, and in particular by people in London and especially by Westminster.

Whether this geographic pattern is really about Europe, or about a general sense of discontent with the contemporary, cosmopolitan world, is hard to disentangle. But this new divide has only been politically salient recently.

It used to be the case that areas with more expensive housing voted Conservative and those with cheaper housing voted Labour. And by ‘used to’ I mean just a decade ago.

Let’s look at how the relationship between house prices and support for the Conservative Party has changed since the 2010 general election. The figure below shows how this pattern has changed in just a decade.

In 2010, if you knew the average cost of a house in a constituency, you’d have a pretty good idea of how they’d vote. Wealthier constituencies – measured by housing – tended to vote Conservative.

Constituencies with cheaper housing tended to vote Labour. The Liberal Democrats, for their part, did well in areas with middling house prices.

As before, I have coloured the constituencies by the colour of the victorious party in 2010 and I have added an ‘L’ or an ‘R’ to reflect what would happen in the referendum. 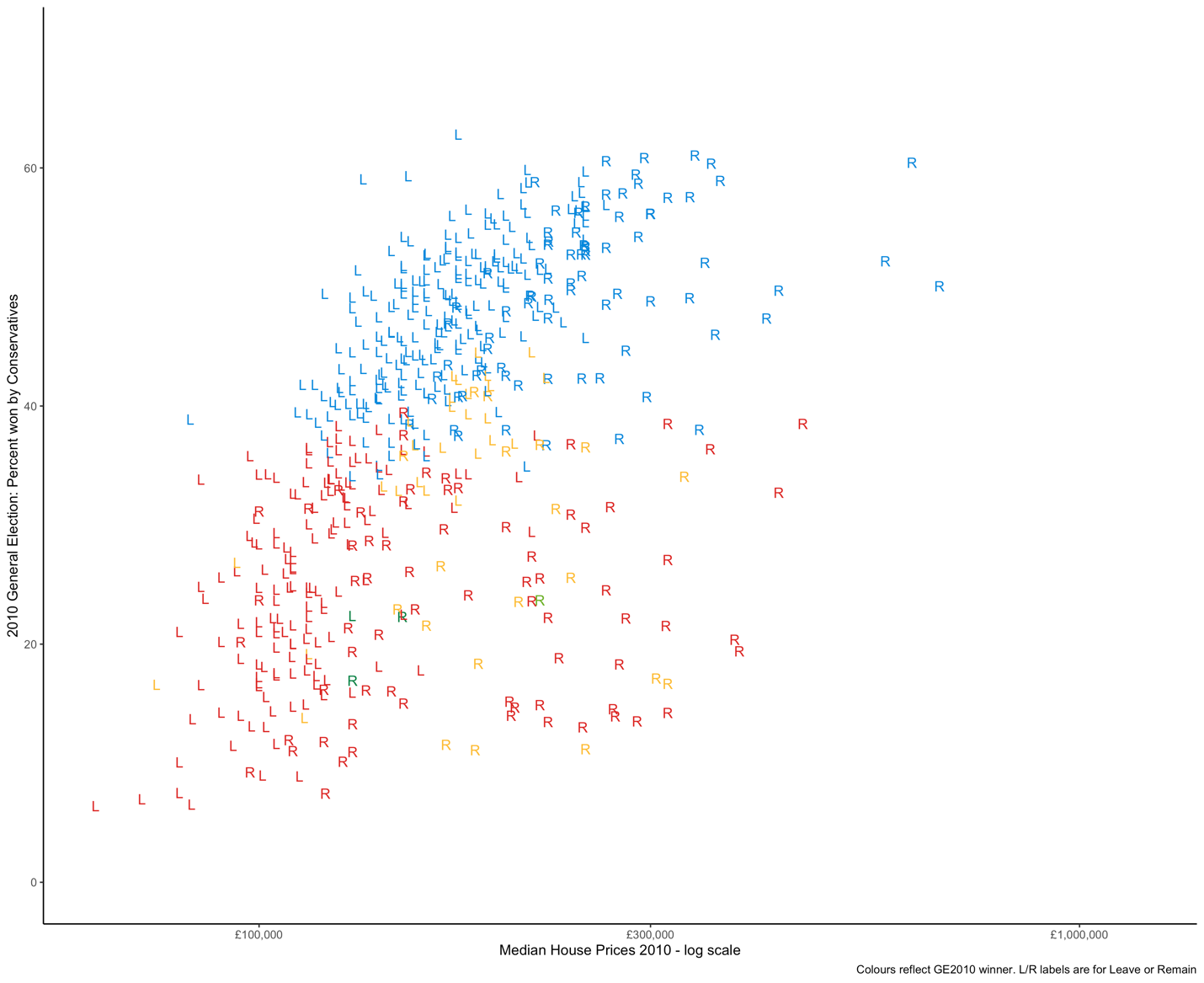 We can already see quite a bit of diffusion for areas with house prices, however.

There is a large number of Labour and Liberal Democrat voting constituencies in the bottom right of the graph – places with expensive housing but no love for the Conservative Party, largely in London.

Moving to 2015 we see the pattern is still there but starting to dissolve slightly, especially in wealthier areas. If we were to draw a straight line of best fit it would be rather flatter (housing has gone from explaining 27% of all variation in the Conservative vote in 2010 to 21%). 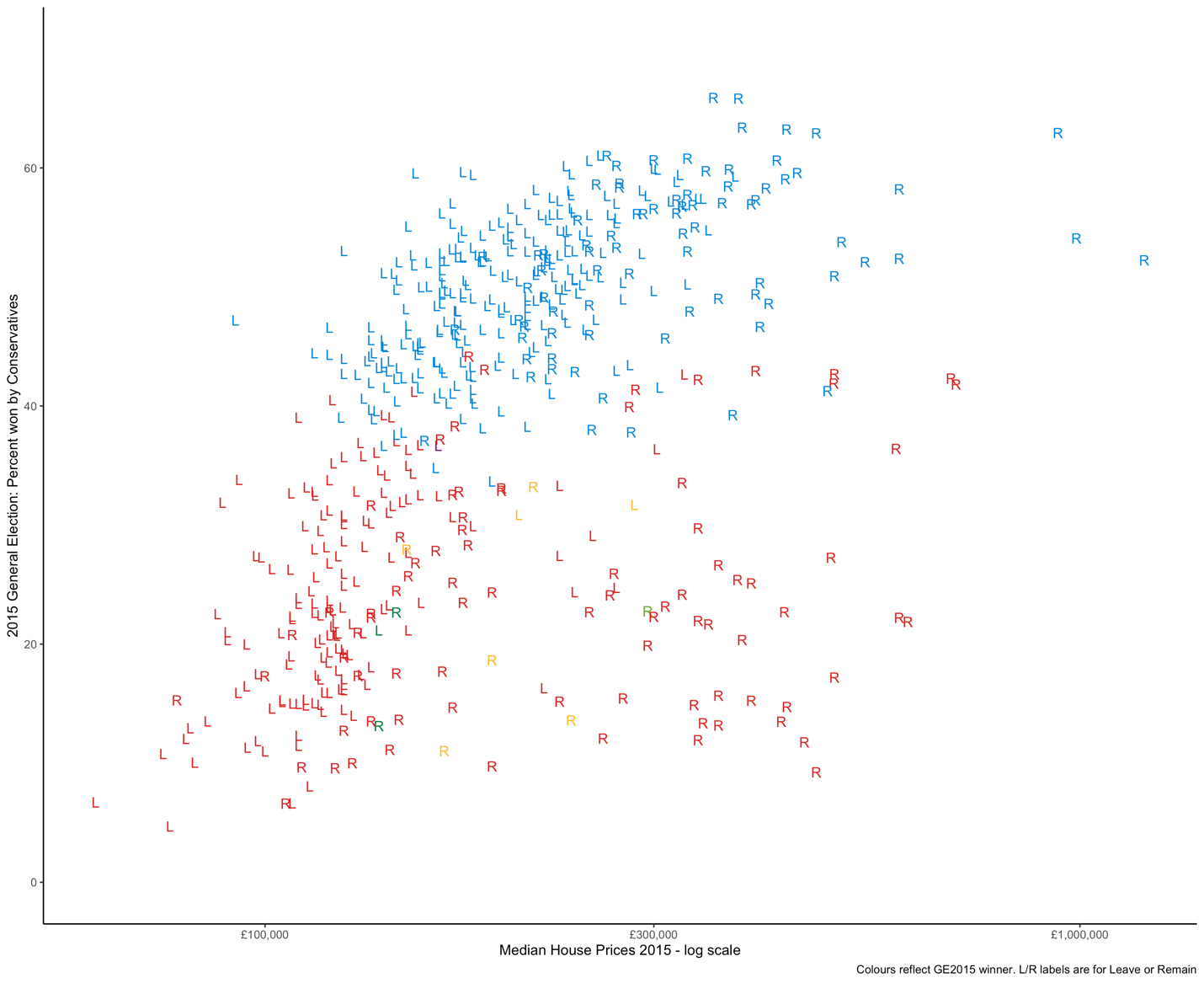 And as we move to 2017 the relationship has collapsed. Now housing explains only six percent of variation in support for Theresa May’s Conservatives.

If anything, there is a U-shaped relationship between house prices and support for the Conservatives – they appear most successful in those areas with house prices around the national average. As we move to the extremes we enter areas relatively more favourable to Labour. 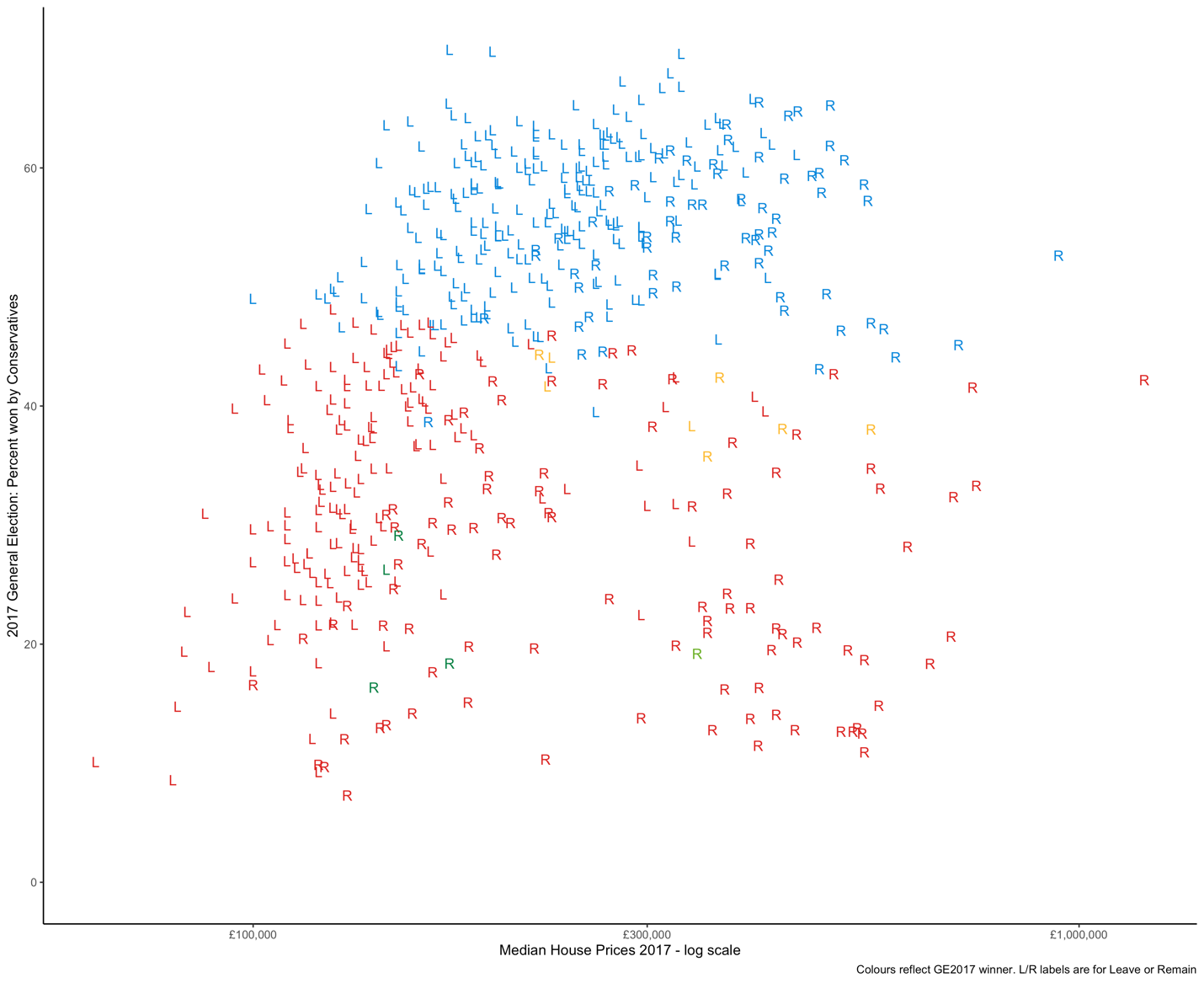 But what we can do is look at one of the first MRP polls to be fielded, by Best for Britain, giving us estimates across all constituencies in England and Wales. It’s not perfect but short of sampling a thousand people in each constituency it’s the best we can do. 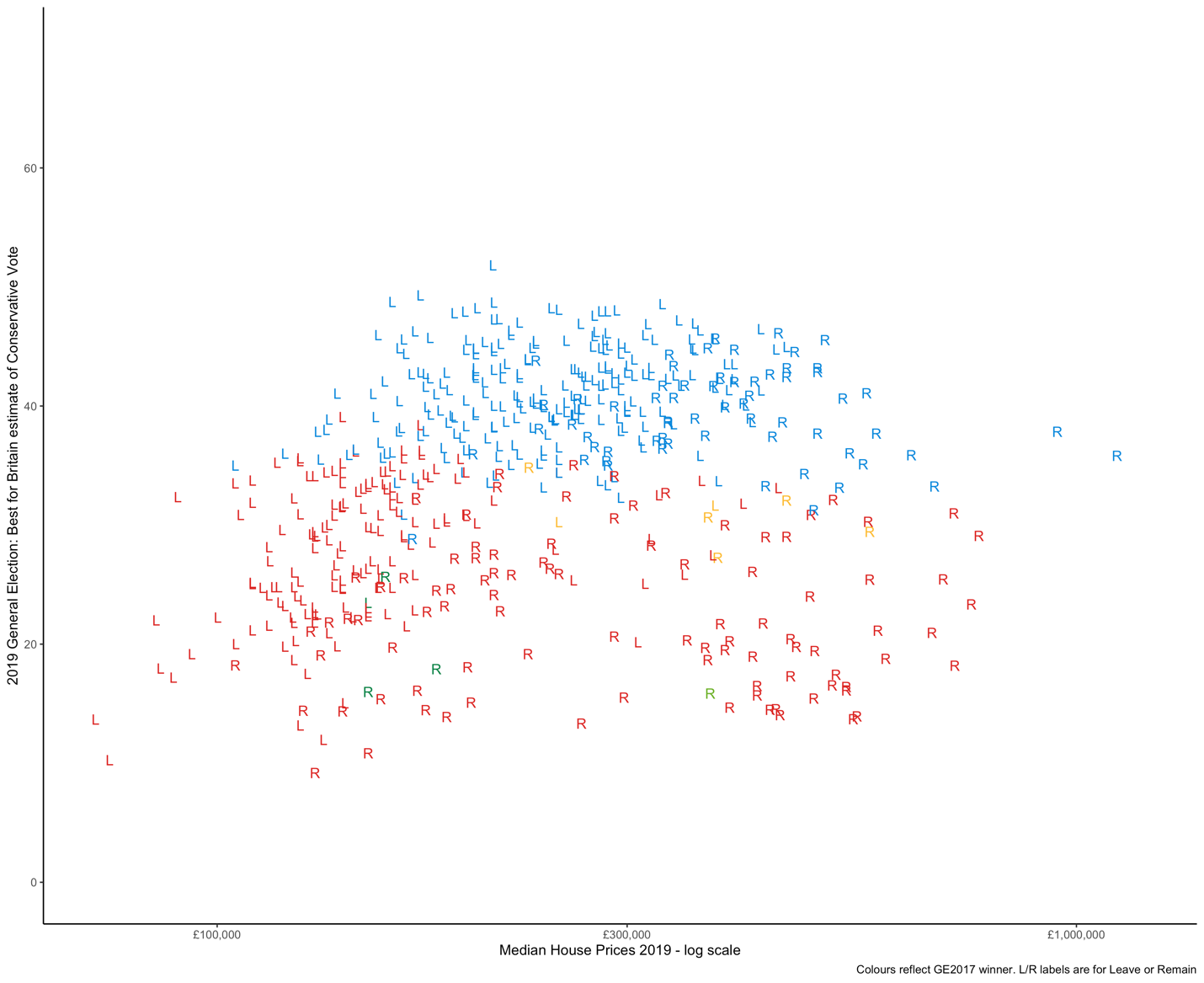 What do we see? An odd clumpy pattern that looks more than anything else like a brain. There is an almost perfectly flat ‘relationship’ between house prices and support for Boris Johnson’s conservatives.

The relationship between local residential wealth and support for the Tories is kaput. Or, in other words, knowing how wealthy an area is provides almost no information on how it is likely to vote in this election.

What does help us? Knowing how a constituency voted in the referendum. Even there, though, it’s not perfect since there are still a number of Labour Leave constituencies and a few Conservative Remain areas.

There are two things going on and cancelling each other out. On the one hand there is the longstanding predilection of wealthier areas to vote Conservative and poorer areas to vote Labour.

People who experience house price growth tend to become less supportive of the welfare state, so this relationship makes sense in the old currency of class politics.

But the other thing going on is the relationship between house prices and Brexit support. This goes in the other direction – areas with more expensive housing are less likely to have supported Brexit.

So is this the end of class politics in Britain? Well maybe, if by class you mean residential wealth. But there’s lots of other things that matter in how we define class.

Education for example is very strongly related to support for Remain, and increasingly so for Labour’s support (though this may be in part caused by age differences in both views over Brexit and in the likelihood of having a university degree).

But what these figures do show us is that division in British politics is not simply between parties but within them.

Brexit has scrambled our allegiances and our stereotypes of Conservative and Labour voters. And since Brexit is just beginning, that’s not likely to change any time soon.

Ben Ansell is Professor of Comparative Democratic Institutions at Nuffield College and the University of Oxford.

This project has received funding from the European Research Council (ERC) under the European Union’s Horizon 2020 research and innovation programme, grant agreement number 724949. The ERC project code for this project is WEALTHPOL.