Has NATO and EU expansion provoked the conflict in Ukraine? 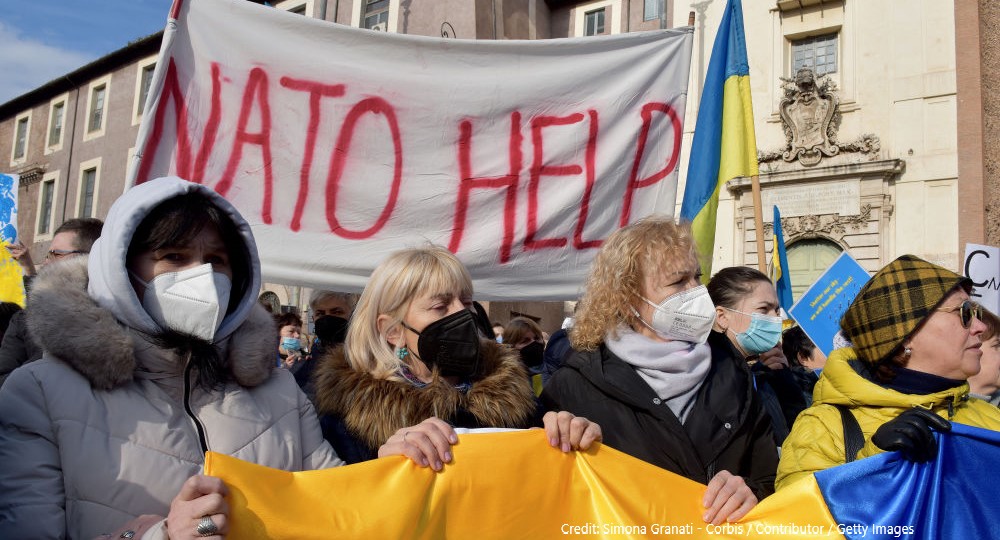 Some analysts have suggested western expansion into eastern Europe after 1991 is a strategic blunder, and has predictably led to the catastrophe unfolding in Ukraine. The growth of the North Atlantic Treaty Organisation (NATO) from 16 members in 1990 to today’s 30 is sometimes described as imperialist, and EU enlargement has been subjected to similar criticism, namely that a western power grab has provoked Russia.

Such views give succour to Vladimir Putin and undermine the legitimate wish of Ukraine to become part of the European economic and security architecture. They also undermine Ukrainian citizens under siege and defending their homeland.

Putin sponsored the uprising in Eastern Ukraine that has cost 14,000 lives, and illegally annexed Crimea. Years of aggression, including cyber-attacks, have culminated in the current disastrous war against an independent, democratic, and sovereign state, threatening regional and global stability.

The 1989 revolution in the Communist east of Europe was powered internally by popular protest. Beginning in Poland with the Solidarity movement, boosted by support from Pope John Paul II, change swept through the whole region. Soviet-backed governments fell, and the USSR itself imploded. Mikhail Gorbachev’s dream of ‘socialism with a human face’ died, giving way to a kleptocratic autocracy under Boris Yeltsin.

Former Warsaw Pact members soon applied to join NATO and the EU. The Treaty of Rome offers EU membership to any European state willing and able to take on associated responsibilities and meeting Copenhagen Criteria for accession. Former Communist states had to implement reforms to business practice, property rights, and legal systems to cope with EU law and a market economy.

This upsets many on the left: the EU favours a capitalist market economy, which the peoples of the former Communist states wanted in the 1990s. They did not want, as Timothy Garton Ash eloquently testified, a version of socialism. From under Russian bombardment, a Ukrainian leftist, Taras Bilous, has appealed to critics of Western policy to suspend their criticisms while Moscow rains missiles on Ukrainian cities.

NATO too has an ‘open door policy’ enshrined in Article 10 of the Atlantic Treaty. This offers membership to any ‘European State in a position to further the principles of this Treaty and to contribute to the security of the North Atlantic area’. All the former Communist countries wanted to join NATO to protect their interests and aspirations as independent sovereign states.

Applications to join both the EU and NATO are ‘merit-based’ and include shared values and a common understanding of democracy. In contrast, Russian claims on Ukraine are based on ethnicity, nationality, and geopolitics.

Three of the Visegrád Group – the Czech Republic, Hungary, and Poland – joined NATO in 1999. In the following year, Yeltsin handed power to Vladimir Putin and ten more states formed the Vilnius Group to prepare and lobby for NATO membership. Seven of them, Bulgaria, Estonia, Latvia, Lithuania, Romania, Slovenia, and Slovakia, joined NATO in 2004, just before their EU accession, for which Bulgaria and Romania had to wait until 2007.

States choose whether to apply to NATO or the EU. They can leave either bloc if they wish. To suggest that NATO or the EU have indulged in imperialist expansion ignores the choice element exercised by the states concerned. The EU has certainly extended its influence for political and economic gain, but the process has been of mutual benefit. It is not the zero-sum game implied by imperialism.

NATO has been a defensive alliance since its foundation in 1949. This does not mean that some of its members, the US, UK, and France, have not engaged in egregious acts of war and human rights abuse since 1949. NATO’s only Article 5 intervention, involving collective defence, was in 2001 in Afghanistan. NATO’s International Security Assistance Force operation lasted from 2003 until 2014, and while it can hardly be described as an unmitigated success, the major failures came later.

Other NATO operations in Bosnia Hercegovina and in Kosovo were provoked by what the International Criminal Tribunal for the former Yugoslavia later judged to be war crimes, including genocide, by the Serbian leaderships in Bosnia and in Belgrade. Those interventions lacked UN Security Council authorisation because Russia and China could apply a veto. Both were reluctant to condemn their Serbian allies.

EU and NATO enlargement should be seen in the context of the Helsinki Final Act (1975) to which the USSR was a signatory, and the Charter of Paris (1990), signed by Gorbachev. These texts underline the right of sovereign states to self-determination in their choice of partnerships. In the Budapest memorandum (1994) Russia agreed to respect the territorial integrity and the existing borders of Ukraine in exchange for Ukrainian denuclearisation.

What was agreed or not agreed regarding NATO expansion after the end of the Cold War is highly contested. Putin is aggrieved that the West broke commitments made in the aftermath of the Soviet collapse.

But it is an odd logic that supposes that Russia, a successor state to the former oppressor of nine NATO members, should have a veto over who joins the Alliance, a demand rejected by NATO Secretary General Jens Stoltenberg. Given the threat now, Putin’s demand that NATO forces withdraw from the Baltic states is untenable.

Why did NATO not admit Russia as a member? There was a short period where Russia might have pursued membership, according to former NATO Secretary General George Robertson. Putin asked to be invited to join ‘as an equal’. Robertson replied that NATO does not invite states to join, they must apply. Putin never did apply, and by 2004 he had gone off the idea, preoccupied with the Orange Revolution and pro-democracy movement in Ukraine. In any case, Russia did not meet the stipulation that a state joining the Alliance should be free from border disputes or internal conflict. Wars raged in Chechnya between 1994-96 and 1999-2000, with hostilities continuing for years afterwards.

NATO instead offered Russia a partnership, initially through the NATO-Russia Founding Act in 1997, intended to reassure Yeltsin. This was augmented by a NATO-Russia Council in 2002 to aid security cooperation. After the Vilnius enlargement in 2004, even Putin expressed the view that ‘each country has the right to choose the form of security it considers most appropriate’. Neither Yeltsin nor Putin were keen on NATO enlargements, but they acquiesced in their inevitability. They had no choice against the settled will of the countries involved.

Throughout the post-1949 period, NATO and the EU have been consistent in their shared commitment to European security. It is Putin who has changed, and Russia’s actions consolidate the prospect of a new cold war in Europe. NATO’s function is to secure peace in the North Atlantic area, a task as valid now as it ever was pre-1991. Given the bellicosity of the current regime in Moscow, NATO must maintain guarantees to its membership. It is fundamental to the values and aspirations cherished by NATO and EU members, and prospective members.

A new thought is whether current events will cause Finland and Sweden to reconsider their neutrality, and apply to join NATO.