Has parliament just got boring? Five conclusions from the passage of the EU Withdrawal Agreement Act

1. The Act passed easily – but the circumstances were unusual

The EU (Withdrawal Agreement) Act 2020 (the WAA or – before it gained Royal Assent – the WAB) passed with remarkable ease and speed.

A 100-page bill implementing the Withdrawal Agreement, it was packed with detailed provisions on everything from citizens’ rights to the operation of the Joint Committee.

Nonetheless, following just 11 days’ scrutiny, it passed wholly unamended: five government defeats in the Lords were swiftly overturned when the Bill returned to the Commons.

Comparison with a key previous piece of Brexit legislation – illustrated in the table below – shows how uneventful the WAB’s passage was in relative terms.

The EU (Withdrawal) Act 2018 was similar in scope and complexity, but had a far rockier passage. During 36 days’ scrutiny the government was defeated 16 times, including a rare defeat in the Commons.

By the time it passed, it had been so heavily amended – by backbenchers, opposition parliamentarians and ministers themselves – that it was 63% longer than when first introduced. 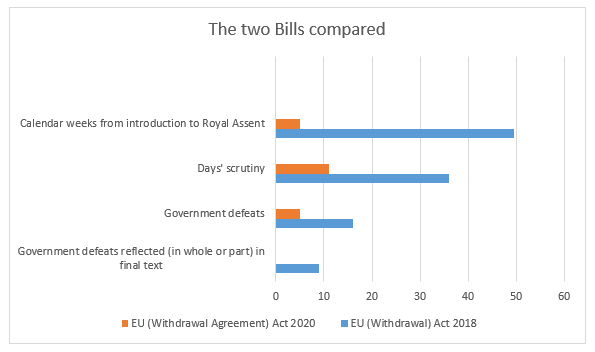 But the WAA passed in very different and unusual circumstances. First, the December election result was read as giving Johnson’s government a clear mandate to deliver Brexit.

Second, the looming deadline of 31 January left little time for detailed scrutiny – no matter how desirable that might normally be. In practice it was very difficult for parliamentarians to challenge the detail of the bill in these circumstances.

So it is not necessarily a good guide for things to come – though the government’s comfortable majority undoubtedly changes things a lot.

2. The Commons may be less interesting – for now

The WAB’s passage does highlight, albeit in an exaggerated way, how much easier it is for the government to pass legislation with a Commons majority.

Had the previous version of the WAB, introduced in October, reached its committee stage it undoubtedly would have faced a rocky passage – with MPs seeking to extract concessions, for example to force a referendum.

On the new WAB, not a single Conservative MP rebelled: an almost unthinkable state of affairs this time last year.

Not only did the general election return a significant Conservative majority but many of the Conservative rebels of the last parliament have either stood down or lost their seats.

Conservative MPs can now be expected, particularly on Brexit, to vote more obediently with the government.

Nonetheless, this state of affairs may not persist for the whole parliament.

Landslide results often lead to the election of candidates who have undergone only cursory party vetting, and who may later surprise party leaders with their views and their independence.

Major rebellions on Brexit would be surprising, but it is not yet clear how far the party is ideologically cohesive beyond this issue. Splits have already emerged this week over the Huawei 5G deal.

Particularly post-transition, there will be more focus on domestic and economic policy issues, and the new intake of MPs will by then have found their feet.

3. But the Lords could become more interesting

Given the comfortable Commons majority, attention may turn increasingly to the House of Lords.

The second chamber’s five government defeats on the WAB were by far the most dramatic events during its passage – even if all were ultimately easily reversed.

The most striking aspect of the WAB’s passage through the Lords, though, was not how many amendments were made, but how few.

Many which were tabled but not pushed to a vote – for example on the scope of delegated powers and parliamentary oversight of negotiations – directly echoed previous defeats on other Brexit legislation.

But rather than seeking to defeat the government again, the amendment sponsors chose to back down.

No party has a majority in the Lords, so it could in theory inflict almost unlimited defeats on the government.

However, the chamber always in practice acts with caution, reflecting long-established norms about the relationship between the two Houses.

Peers are keenly aware of the Commons’ primacy, and rarely inflict significant defeats on policies which have firm backing from government MPs – not least because those defeats can easily be overturned.

So the WAB was not a good test case in the second chamber either.

Some nervousness may have resulted from executive sabre-rattling about the Lords’ future, with threats of relocation to York or Birmingham appearing the day before report stage began, but the unusual circumstances of this bill meant peers’ caution was already likely.

On future pieces of legislation, particularly perhaps on constitutional matters, the House of Lords is likely to provide most detailed legislative scrutiny in this parliament.

But expectations that it might adopt an overtly oppositional role on major policy questions are likely to prove exaggerated.

4. The government is in an uncompromising mood

Parliamentary defeats are only one route to legislative amendment.

Scrutiny is often a more collaborative process, where behind-the-scenes discussions between ministers and parliamentarians on bills result in concessionary government amendments.

Perhaps more striking than either Commons compliance or Lords restraint is the fact that the government tabled not one amendment to the WAB.

Liberal Democrat peer Lord Beith, architect of a key defeat in the Lords, even suggested that Downing Street had blocked Lords ministers from offering a compromise.

Unusually, the extent to which the government was resistant to parliament is visible through the different versions of the bill.

The pre-election WAB passed second reading but was abandoned after its programme motion was defeated.

The second WAB, now law, was published only after Johnson’s election victory and included various changes, – among them no longer giving parliament a vote on the future EU relationship.

This reflects a government inclined, and newly able, to reserve formal decision-making to itself.

But if this attitude is pushed too far, it could inadvertently create problems for ministers.

Proper scrutiny is essential for good government: forcing ministers to defend their policy on the record, and thus encouraging them to think it through.

The WAB’s smooth passage undoubtedly stands in stark contrast to the parliamentary fireworks of recent years and, given the government’s big majority, major clashes with the Commons may prove very rare.

But the WAB itself could give an exaggerated view of the new parliament’s enfeeblement.

Ministers will find it easier to enact their agenda now than in the previous conflicted parliament under minority government. But that period in itself was an aberration.

In general the ‘classic’ view of majoritarian government in the UK tends to underestimate parliament’s influence.

Johnson is probably in a stronger position now than he will be at any other point in his premiership, and prime ministers with far larger majorities have sometimes faced stiff parliamentary resistance.

Parliamentary influence may not always be highly visible, but behind-the-scenes negotiations with MPs and peers – particularly those on the government’s own backbenches – can be lively and important.

In addition, beyond legislation, Johnson and his ministers may face some tough questioning on Brexit and other matters on the floor of the House of Commons, and through the newly-elected select committees.

Coming years may not see the type of parliamentary drama which has recently been commonplace. But to write off this parliament as meekly compliant, powerless, or dull would be premature.