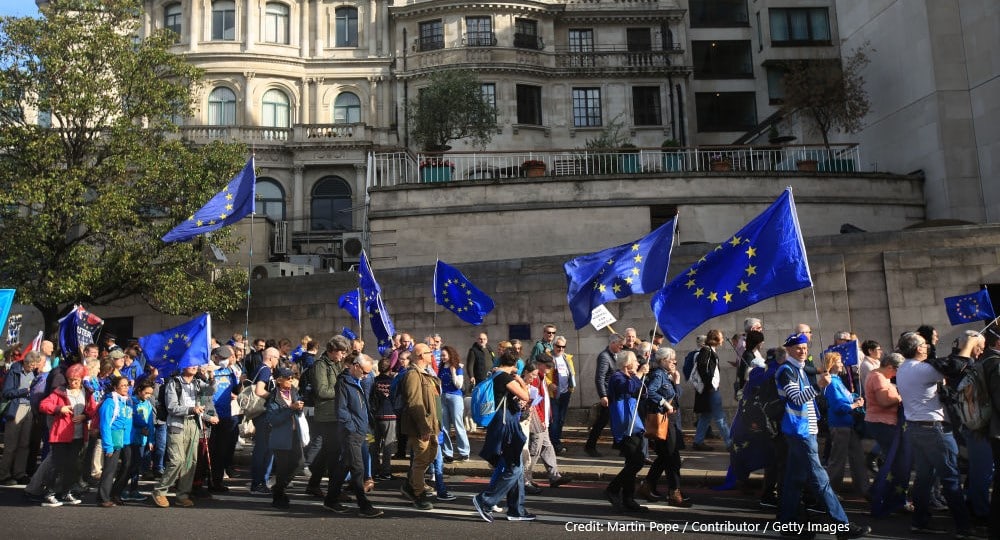 John Curtice analyses the latest Redfield and Wilton Strategies/UK in a Changing Europe poll on attitudes towards Brexit, examining whether the fallout from the mini-budget has changed what people think about Brexit.

The reaction of the financial markets to Kwasi Kwarteng’s mini-budget has had a dramatic impact on the political landscape. It has both brought down a Prime Minister and seen support for the Conservatives plummet in the polls. But what difference, if any, has it made to attitudes towards Brexit? The latest poll, published today, on attitudes towards Brexit undertaken by Redfield and Wilton Strategies for UK in a Changing Europe provides us with a first opportunity to address this question.

The poll certainly finds that the gradual decline in support for staying outside the EU that has been detected in Redfield and Wilton’s polls during the course of this year has continued. After leaving aside those not expressing a view, 57% now say they would vote to join the European Union, while 43% would back staying out. That represents a three-point swing from staying out to joining since the previous poll in August – and as much as a ten-point swing since the first poll last November.

Yet, intriguingly, there has, for the most part, been little change over the last two months in perceptions of the consequences of Brexit. This is apparent from Table 1, which shows for the latest poll voters’ net evaluation of the consequences of being outside the EU across a dozen criteria. The table also compares the latest net evaluation with that recorded in the previous poll in August and in one conducted in February (when these questions were first asked and when support for staying out of the EU was 55%, even higher than the previous November). 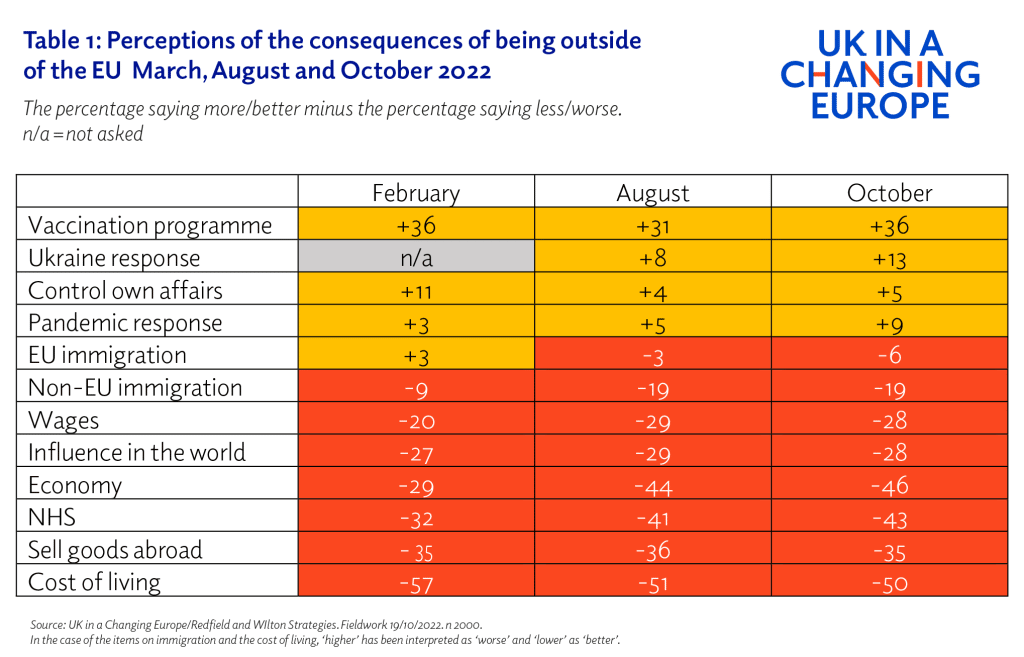 Most of the figures for October are almost exactly the same as those for August. For example, the proportion who think that Britain has more control over its own affairs than it would have if it were still inside the EU is five points higher than the proportion who think it has less, only marginally different from the four-point gap in August. On this evidence the financial turbulence of recent weeks has not had any apparent impact on perceptions of the consequences of Brexit.

Still, it is possible that the financial turbulence has had an impact on attitudes towards Brexit independent of its impact on people’s perceptions of the consequences. Some might have lost faith in a Brexit project that had been implemented by a party whose actions had now occasioned such turbulence. Our latest poll also asked respondents whether ‘the economic problems that have emerged since Liz Truss and Kwasi Kwarteng’s mini-budget changed your overall view of Brexit?’.

Most people, 61%, said that it had not. However, while 9% said they now have a more positive view of Brexit as a result of the mini-budget, more than twice as many, 21%, said that they have a more negative view.

Still, if we include responses to this item in a statistical model of whether people have the same or different view on EU membership now from the one they held in 2016, together with those questions itemised in Table 1, we discover that people’s report of the impact of the mini-budget on their attitude towards Brexit is independently related to a change of view on the subject – even after taking into account their views on the consequences of Brexit.

Why this should be the case is illustrated in Table 2, which shows people’s responses broken down not only according to how people voted in 2016 but also their current view. 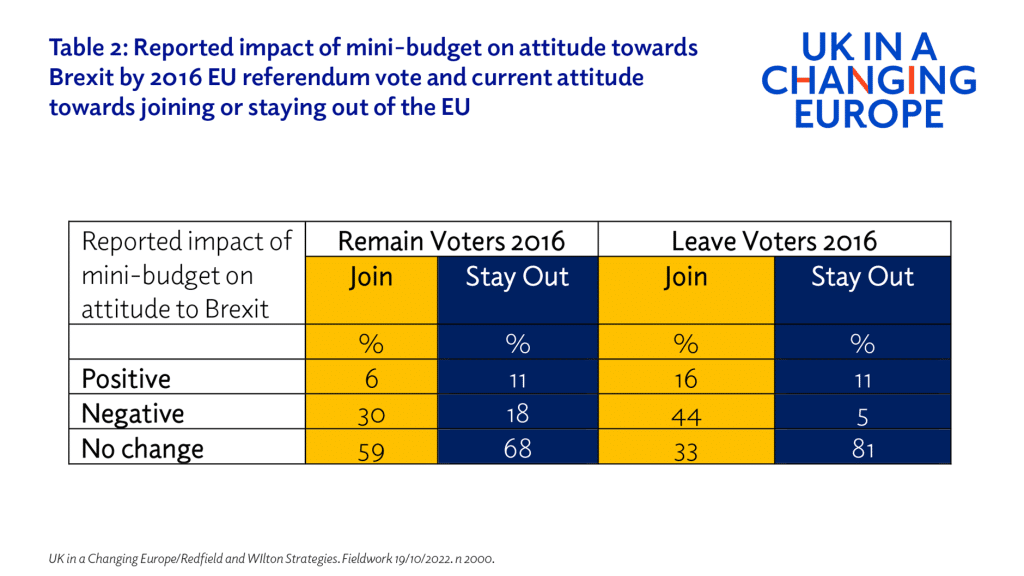 The table reveals that no less than 44% of those who voted Leave in 2016 but would now vote to join the EU say that they have a more negative view of Brexit as a result of the mini-budget. Not only is this in marked contrast to the equivalent figure of 5% for 2016 Leave voters who would vote to stay out of the EU, but it is also even above the 30% figure among 2016 Remain voters who would vote to join.

This analysis does not prove that the mini-budget impelled some 2016 Leave voters to change their minds about Brexit. It may be that those who had already changed their mind at some point between 2016 and the mini-budget were particularly likely to regard the financial turbulence badly. But even if that is the case, it looks as though their change of view may well have been reinforced by some of the events of the last month.

Meanwhile, we should note that while there may have been little change since August in perceptions of the consequences of Brexit, one or two of the figures for the latest poll in Table 1 are rather different from those that were recorded earlier this year. In particular, at -46 net evaluations of the impact of leaving the EU on the economy are markedly less favourable now than they were in February, when they stood at -29.

In reporting on the poll in February we noted that evaluations of the economic consequences of Brexit were particularly strongly related to changes of mind about being inside or outside the EU. This pattern is replicated in the latest poll. Why this should be the case is illustrated in Table 3, which shows how people evaluate the consequences of Brexit for the economy broken down both by how people voted in the 2016 EU referendum and by their current attitude towards the EU. 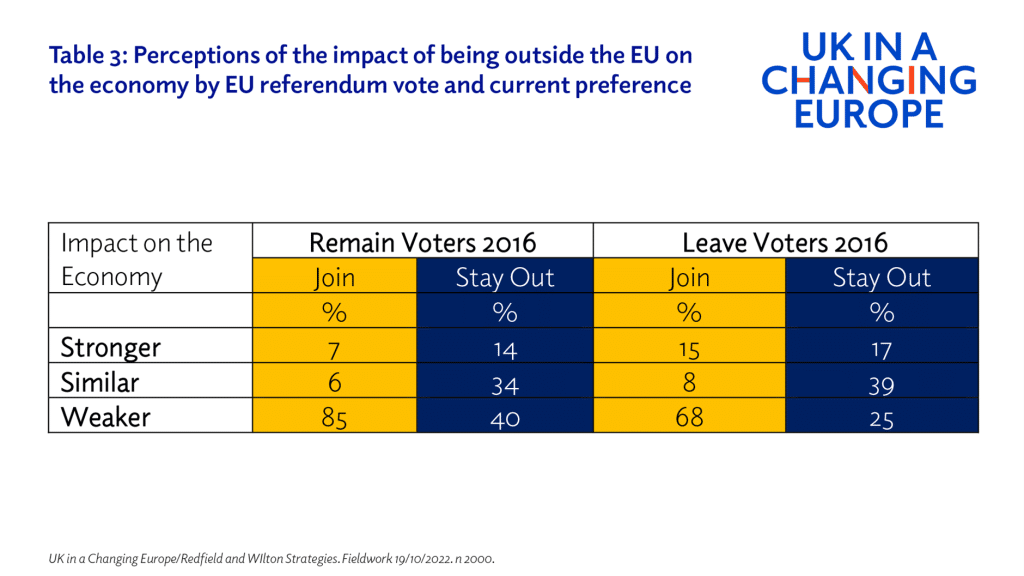 It appears highly likely that a darkening of the public mood on the economic consequences of Brexit helps explain the increase in support for joining the EU that has been registered in Redfield and Wilton Strategy’s polls during the course of this year, even if it may not have been immediately responsible for the most recent further movement in that direction.

Meanwhile, we cannot rule out the possibility that the financial turbulence of recent weeks may at least have helped to reinforce that mood. What happens to the economy and the country’s fiscal finances in the coming weeks and months may not only be crucial to the Conservatives’ future electoral prospects, but also for the continuing level of support for Brexit.

A slightly longer version of this blog can be found on What  UK Thinks.

The Conservatives have convinced voters of the need to level up