Has the media focused on Brexit in this election? 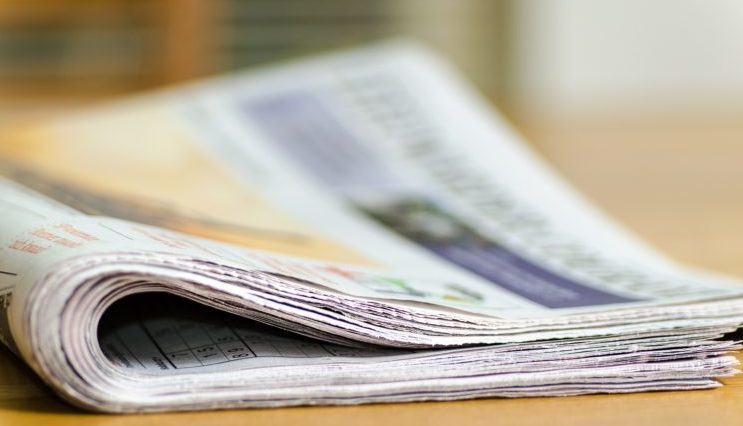 Boris Johnson has recently bemoaned the way an election campaign he wanted to be about Brexit has moved away from topic.

The Prime Minister wanted the debate to be primarily about this issue because, as he recently explained to Sun political editor Tom Newton-Dunn, ‘people have slightly lost their focus on the political crisis that we face.

Unless we get this thing done, unless we get Brexit done, this country cannot move forward. And I think maybe we need to bring that back’.

But is Mr Johnson right in his perception that that the topic of how (and whether) the UK will leave the EU has been side-lined in recent weeks?

Having conducted real time analysis into news coverage of the campaign, Loughborough University’s Centre for Research in Communication are able to help, because our findings provide insights into what have, or have not, been the defining issues of this election as reported by the major television channels and national daily newspapers.

The results in our report are drawn from a detailed content analysis of election coverage produced on the weekdays (i.e. Monday to Friday inclusive) between 7 November and 4 December.

For strategic reasons, Boris Johnson always wanted this to be a ‘Brexit Election’. But successive weeks of the campaign have seen decreasing media interest in the issue.

Brexit is, of course, still a prominent topic, but it is has faded into the background as other policy areas have asserted themselves on the news agenda.

Table 1 offers an invaluable guide as to how the news agenda has evolved over the month since the election began. It is clear there has been some significant changes in the media reporting of the campaign. 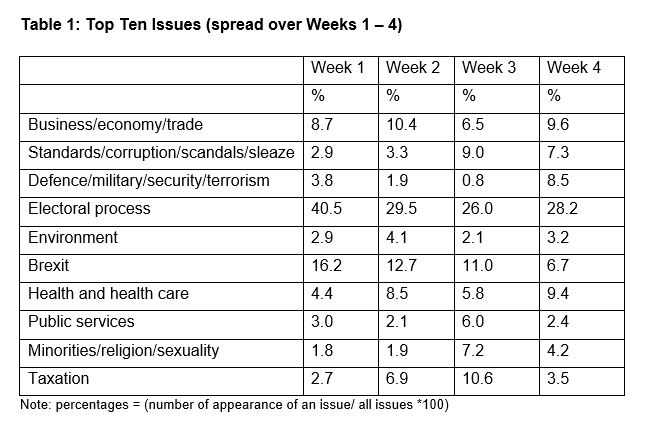 Traditionally the ‘horse race’ category, covering the electoral process and the personalities, polls and other non-policy aspects of the campaign, is the theme that is most prominent in terms of coverage.

The first week was dominated by this kind of news, reflecting the debate over whether and where the Brexit Party would stand candidates.

These opening days of the campaign were also those in which Brexit featured to the greatest extent.

Although the topic remained the principal substantive policy issue during the first three weeks of the election, it has been far from the only major subject to be reported.

This election campaign has featured considerable media coverage of several major issues including the economy, health and taxation.

These and others have asserted themselves on the news agenda to the point where, in the last week, Brexit has been relegated from first to the fifth most prominent issue, and attracted well under a half of the media attention it garnered in the first week.

Brexit continues to inform how the election is reported, but it is more a case of it being everywhere rather than nowhere as coverage turns to focus on other issues.

A good example of this is the way the media outlets surveyed reported the recent controversy over future US trade talks but did so without making explicit reference to the UK’s withdrawal from the EU.

There are interesting parallels between what has been reported in this election and campaign and the one of 2017.

That campaign saw a return of the media focus on Brexit in the week before polling day, but the topic didn’t dominate the electoral agenda as some had predicted it would.

This was because unforeseen events, notably the atrocities in Manchester and London, had a significant impact on the way the media reported the closing stages of the election.

Unfortunately, the current campaign has seen a further terrorist outrage in the capital, and a similar and understandable refocusing on security in the way it has been reported.

More predictably, health has asserted itself on the news agenda, but to a greater extent than it did in 2017.

As we head into the final hours of the campaign it will be fascinating to see to what extent the NHS continues to be a headline issue.

With the holiday period looming, the Prime Minister will be keen for voters to return to thinking about what some Conservative newspapers have already called ‘the Brexmas election’.