Have the Tories become an anti-parliament party? 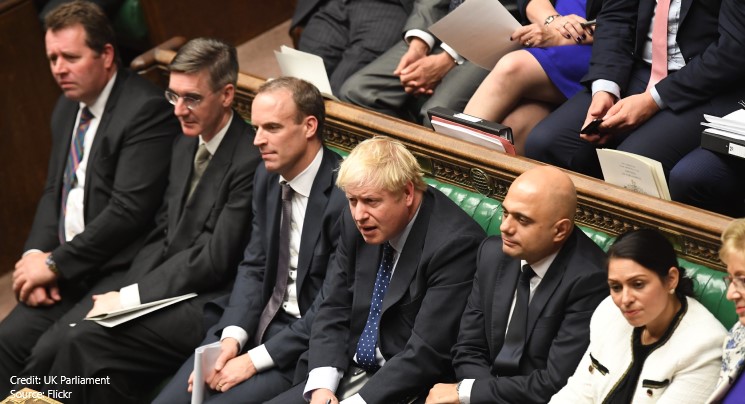 After Theresa May’s withdrawal agreement was defeated three times, and then Boris Johnson’s deal suffered setbacks in the past few days, parliament has become the new target of the Conservative Party.

Although the party has historically been the party of established institutions, in particular Westminster – long viewed as the sacrosanct emblem of national sovereignty – a new populist narrative has emerged among the hard Brexiters of the party.

Parliament is now portrayed as ‘the enemy of the people’, who are therefore denied the possibility of seeing their views respected and Brexit delivered.

The people against parliament

In Britain, Westminster is a key symbol of national sovereignty.

During the 2016 EU referendum, Leavers campaigned around the need to ‘take back control’ – to reinvigorate parliamentary sovereignty and to repatriate powers from the EU institutions.

Yet, with parliament now gradually blamed for being incapable of delivering Brexit, many Conservative MPs have developed a new obsession with ‘the people’, in whose name parliament should be urged to act.

Populism is probably one of the fuzziest concepts in political science.

It is clear, however, that the Conservative Party has come to adopt this new populist rhetoric which sacralises ‘the people’ without ever identifying it clearly.

Boris Johnson championed this narrative at the Conservative Party conference in Manchester. In his keynote speech, on 2 October 2019, he declared: “I am afraid that after three and a half years people are beginning to feel that they are being taken for fools. They are beginning to suspect that they are forces in this country that simply don’t want Brexit delivered”.

With these words he was suggesting that sovereignty is now invested in the people which is narrowly defined as those who ‘want Brexit delivered’ and hinting at the notion of an elite conspiracy against them (note the mention of ‘forces’).

This narrative seems to have been echoed in the Commons itself, with – for example – Jack Brereton speaking of “parliament holding the electorate in contempt”, or John Redwood accusing it of “stealing democracy.”

From a paralysed to a ‘rotten’ parliament

As part of this populist narrative, a new rhetoric has developed inside the parliamentary arena blaming parliament for the constitutional chaos and social tensions which have gripped the country for the last three years.

Although Conservative MPs are actually divided on this issue, the perception of parliament has radically changed among them.

On the one hand, parliament is stigmatised and paralysed either by fear, cowardice (“parliament lacks courage and confidence”, John Redwood, March 2019), incompetence (“this House is institutionally and politically incapable of delivering Brexit”, Stephen Crabb, February 2019) or even death (“zombie parliament”, Bob Seely, September 2019).

On the other hand, members of parliament are portrayed as part of a conspiracy of Remainers committed to thwarting Brexit: George Freeman spoke of the existence of a “Remainer conspiracy” while Jake Berry denounced the “cabal of politicians in this House who have sought repeatedly to block Brexit”.

While conspiracy theories happen to be more frequent in populist rhetoric, Conservative MPs are usually less prone than those of other parties to lambast an institution which has always been one of their core pillars.

Outside Westminster, however, unbridled criticisms which go as far as to denounce a ‘rotten parliament’ proliferate on personal blogs, or in the fringe meetings of the party conference, adding fuel to the fire of public exasperation.

Although Conservative MPs’ attacks specifically target the parliament elected in 2015 and partly reelected in 2017, with a hope that a general election will renew its composition sooner rather than later, these recurrent criticisms tend to undermine the legitimacy of the institution and can only weaken public trust in the British representative system even further.

The latest audit of public engagement, published by the Hansard Society in 2019, revealed that Britons have more confidence in the military (74%), judges (62%) and even civil servants (49%) than in MPs (34%) to act in the public interest, and only 25% of them have confidence in the MPs’ handling of Brexit.

In 2012, academic expert Philip Norton wrote that ‘the Conservative embraces the Westminster model as the epitome of British democracy.’

The party has indeed been historically associated with the promotion of established institutions, with parliamentary sovereignty and the rule of law at the heart of this model.

Yet with MPs helping to promote the view that parliament has been fundamentally unable to deliver Brexit, public trust can only keep declining.

In addition, the 2016 EU referendum has challenged the heart of the Westminster model by legitimising popular sovereignty as a new democratic norm in the UK, straining the relationship between the people and parliament and elevating the status of the referendum as an instrument in British politics.

In this context, Conservative hard Brexiters seem to have developed an agenda which no longer emphasises traditions and the rule of law, paving the way for a new form of populism which may turn out to be fundamentally un-Conservative.

By Agnès Alexandre-Collier, Professor of Contemporary British Civilisation and Politics at the University of Dijon.