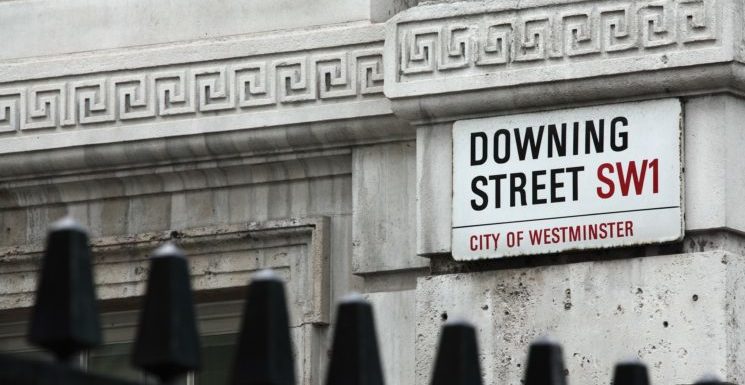 The Brexit negotiations have now entered the endgame. Boris Johnson’s government has put forward proposals to replace the Northern Ireland backstop that was the principal reason why MPs rejected the withdrawal treaty that Mrs May had negotiated.

The government hopes that its proposals will form the basis for a revised agreement that will enable the UK to leave the EU with a deal at the end of this month.

But if not, the UK government is determined that the UK should leave the EU at that time anyway.

In adopting that stance, the government argues that voters have lost patience with a Brexit process that has failed in over three years to deliver Brexit.

It is suggested that even those who voted Remain would like the saga to be brought to a swift conclusion, thereby enabling the country to unite and move on to a domestic agenda that has been badly neglected during the Brexit negotiations.

Indeed, it is a theme to which the Boris Johnson returned in his party conference speech yesterday.

But how valid is this claim?

There has, in truth, been relatively little polling that addresses this issue directly.

Probably the question that comes closest to doing so comes from Opinium who on a number of occasions this year have asked people to choose which of the following three options best describes their view:

“I want to make sure that Britain get the best possible deal when it leaves the European Union, regardless of how long it takes”

The first of these options would seem to reflect the sentiment that the government claims is widespread among voters.

The pattern of answers to this question suggests that the desire to leave the EU as soon as possible is indeed quite widely felt.

On average across eight readings taken since February just over one in three (35%) have picked the first option.

In contrast, slightly less than one in four (24%) say that they are willing to wait to get the best possible deal.

Just under three in ten (29%) say they want to see Brexit reversed.

Still, just over a third is considerably less than a majority. It is hard on this evidence to argue that most voters are impatient to get Brexit done.

There is also little sign that voters are any more impatient now than they were last April, shortly after the UK had initially failed to leave the EU.

That said, what is true is that most Leave voters are more concerned to leave quickly rather than they are to get the best possible deal.

Across the two readings of their poll question Opinium took in September, on average around two-thirds (68%) of Leave supporters said we should leave the EU as soon as possible while only one in five (20%) indicated a willingness to wait for the best possible deal.

Conversely, however, there is no evidence that anything other than a small minority of Remain supporters simply want Brexit to be done and dusted as soon as possible.

While 29% of Remainers were willing to wait for the best possible deal, rather more than half (52%) said that Britain should remain in the EU irrespective of whatever deal is negotiated.

Apart from this question from Opinium, there a number of other questions that address the issue of whether the UK should be leaving the EU at the end of October and which might also be thought to provide evidence of the public mood on the need for an early end to the Brexit impasse.

Though variously worded, they all paint much the same picture.

As a result, supporters and opponents of an exit by the end of the month are more or less evenly matched in the electorate as a whole. 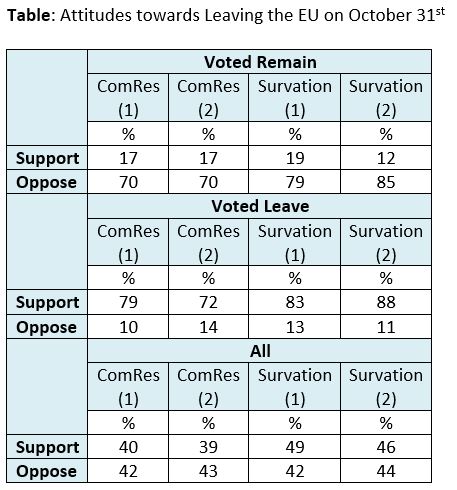 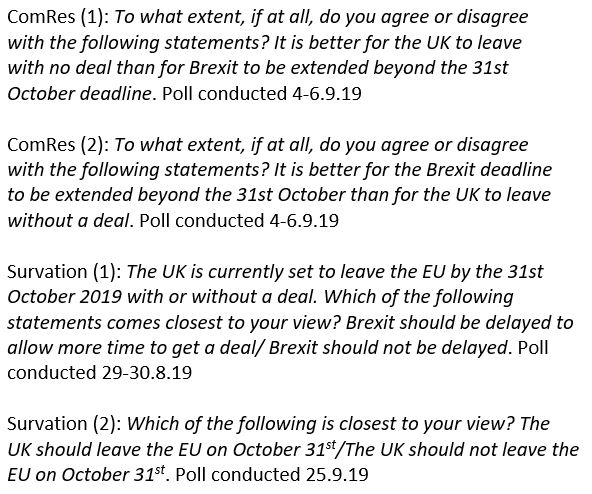 The pattern of response to four such questions is summarised in the table.

It did not matter which way round the question was asked.

While in both cases just over seven in ten of Leave voters expressed the view that it would be better to leave without a deal than to delay, at the same time exactly seven in ten Remain voters took the opposite view.

While over eight in ten Leave voters said that Brexit should not be delayed and should take place on 31 October, the balance of opinion among Remain supporters was almost exactly in the opposite direction.

As a result, all four polls suggest that overall supporters and opponents are more or less evenly matched, an impression also conveyed by a further reading from Ipsos MORI for which a breakdown by how people voted in 2016 is not available.

There appears then to be a substantial body of voters who think that the UK should leave the EU at the end of October come what may.

But they are – unsurprisingly perhaps – mostly those who voted Leave.

There is little evidence that frustration with the Brexit impasse has persuaded many Remain voters that it is time to call time on the process.

This suggests that leaving at the end of October might not provide as helpful a backdrop to the subsequent task of bringing the country together as the government appears to anticipate.

By Sir John Curtice, senior fellow at The UK in a Changing Europe and Professor of Politics at Strathclyde University. This piece was originally published by What UK Thinks.