Have Welsh voters changed their view of Brexit? 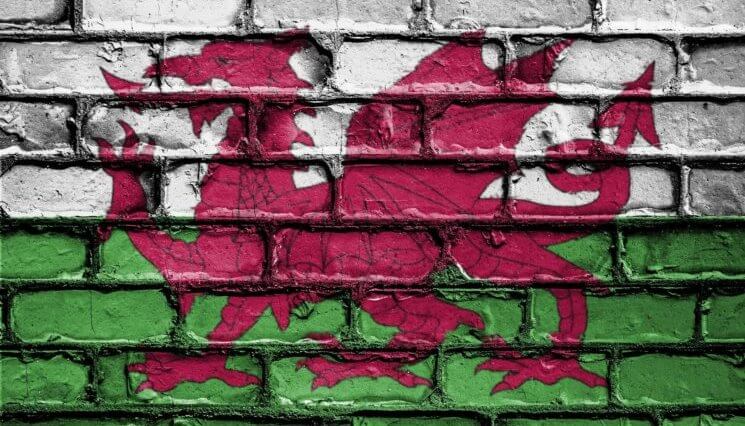 The June 2016 referendum result in Wales surprised many.

Wales voted Leave by a margin that almost exactly mirrored the result across the UK. It did so against its own apparent self-interest (as a net beneficiary from the EU budget) and against the overwhelming consensus of the Welsh political and cultural elite. Yet Leave it clearly was.

Since the referendum, Cardiff University’s Wales Governance Centre has conducted regular and detailed research on public attitudes to Brexit. Our frequent Welsh Political Barometer polls (the only regular political polling in Wales, conducted jointly with YouGov and ITV-Wales) has tracked public opinion.

A major academic survey, linked to the 2016 Welsh Election Study, was conducted in summer 2017. And in late summer 2017 we also carried out qualitative focus groups, concentrating on working class Leave voters in the south Wales valleys that voted heavily for Brexit.

The regular polls have shown little sign of any significant shift in public attitudes thus far. People have been asked how they would vote in another Brexit referendum: as Figure 1 shows, throughout the last eighteen months there has been little change.

This overall stability reflects very few people on either side of the Remain/Leave divide having changed their mind since June 2016. The most recent poll, published in late-November 2017, suggested a modest move against Brexit: Remain was five points ahead of Leave. But this is hardly a decisive shift in the public mood. 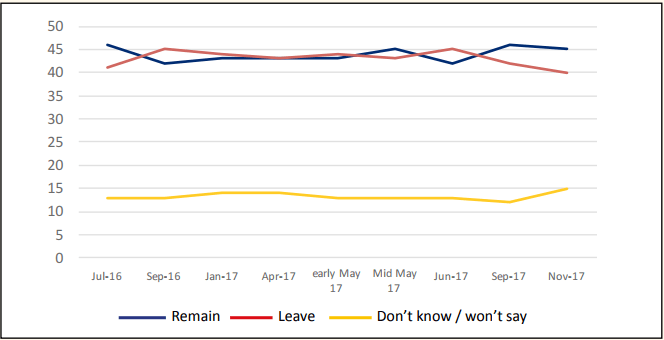 The persisting divisions between Remainers and Leavers go much further than merely referendum voting intention. Our detailed academic survey showed stark differences between the two groups along several dimensions.

Remainers and Leavers in Wales differed on what they want to happen. There was no consensus on what kind of deal the UK should seek with the EU. The majority of Leave voters (78%) wished to see the UK regain full control over how Britain is governed and who can live in the UK, even if that meant not having a free trade relationship with the EU.

By contrast, some 63% of Remain voters either wished for Britain to remain in the EU after all (41%) or to retain close ties through associate membership (22%).

The two sides also differed starkly in terms of what they expected to be the consequences of Brexit. When asked if they would personally be better or worse off as a result of Brexit, some 73% of Remainers believed they would be worse off, compared to only 17% of Leavers.

Most Leavers (53%) felt there would be no perceivable difference, though nearly a third (30%) believed they will be personally better off after Brexit.

Similar findings can be seen when asking about the economic consequences of Brexit for Wales, with 82% of Remainers believing it will be worse off, compared with only 24% of Leavers. The majority of Leavers (52%) again expected no marked difference, with 24% thinking Wales will be better of

We also asked respondents about the impact of leaving the EU on key policy areas including unemployment, immigration and Britain’s global influence. The data showed that:

• When it comes to immigration into the UK, the majority of Leavers (70%) expected to see immigration fall, whereas only 30% of Remainers believed immigration will decline; 63% of them expected it to remain about the same.

• On the issue of Britain’s global influence, very few Leave voters (10%) thought that Britain will have less influence after Brexit, compared with 68% of Remain voters expecting that Britain’s place in the world will be diminished.

But Remain/Leave voter differences even went as far as matters of political process: how Brexit should be done. When asked what they would like to see happen once the talks are concluded, there was again no consensus.

Most Leave voters thought that any agreement struck between the UK and EU should either be implemented immediately or after a ratification vote in the UK Parliament.

By contrast, a majority of those who voted Remain in 2016 either wanted a second referendum to endorse an agreement or thought that both the UK Parliament and the devolved parliaments in Scotland, Wales and Northern Ireland should have to ratify any deal.

To try to understand some of these attitudes more fully, we also conducted five lengthy focus groups with working class Leave voters in the South Wales Valleys. The valleys have been solidly Labour for decades; they have also received large amounts of EU aid in recent times.

Yet all of them voted Leave, most by substantial margins, against the advice of the Welsh Labour party and against their own apparent economic self-interest. So why did they do it?

Three key points came out of our group discussions. The first was continuing and substantial hostility among many of these voters towards immigration. Several participants articulated specifically working class objections to immigration: that immigrants were taking jobs from locals and driving down
wages – to the benefit of employers rather than ordinary workers.

The second prominent theme in the discussions was that participants struggled to see how their communities had benefited from EU membership. Much EU spending in the valleys was viewed as being wasteful ‘vanity projects’ that had been carried out without much consultation with local communities.

The final point was that many Leave voters expected that Brexit may cause short-term problems – this appears to have already been ‘priced in’ to some extent – but they expect it to be worth it in the longer-term. This research has provided us with the most detailed understanding yet of public thinking about Brexit in Wales.

The picture it paints is not a very positive one. There is little sign of public consensus emerging on Brexit: we are not coming together, as the Prime Minister has suggested, but continue to be deeply divided.

By Roger Awan-Scully, Professor of Political Science at Cardiff University. You can read our full report, Brexit and Public Opinion, here.