Herman Van Rompuy: for Europe, Brexit is a “political amputation” 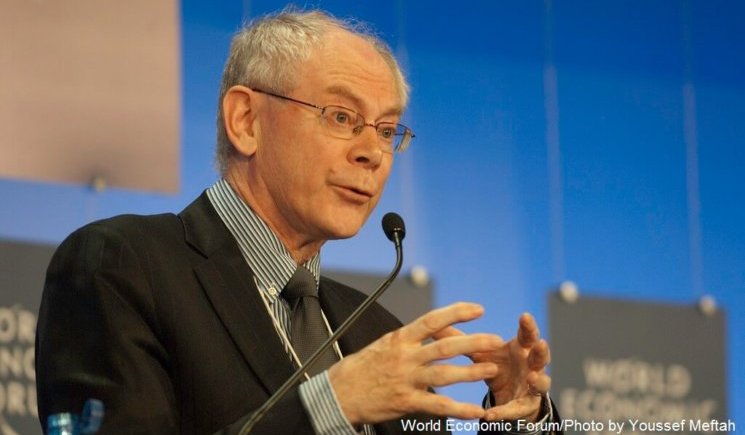 When it comes to Brexit, it’s probably worth heeding the advice of a man who has unparalleled experience of European Union level negotiations. But Herman Van Rompuy, the mild mannered and drily amusing former President of the European Council, doesn’t think we should hold our breath for any particular outcome.

Rather, he thinks Brexit might end up being sorted at the 11th hour, deep into the autumn, when a choice has to be made—between a deal and no deal. This, as he puts it, would be the “last moment, with your back against the wall, the abyss in front of you and a knife under your throat.”

Van Rompuy was speaking at a roundtable that the UK in a changing Europe organised at a large academic conference in Paris (yes, the food was great, thanks). If you’re really keen, you can watch the whole thing here. He spoke after former Ambassador Ivan Rogers, someone else with long experience of EU talks, not least David Cameron’s drive for a renegotiation of the terms of UK membership.

Rogers was more caustic, clinically pointing out the key tension at the heart of British position in favour of “elaborate managed divergence”: London wants to take back control while remaining close to the EU, with continuity in large areas of the economy and security, while being happily outside the EU’s governance structures and legal system.

This, as he pointed out, is really not on offer, and to complete the picture we had a lawyer ready to underline the realities of negotiating trade deals with the EU. My colleague Catherine Barnard has perfected her bingo caller routine: rattling out the list of treaty articles that might cover an eventual trade deal with the EU, whilst underlining how long and complex this process might be.

Not an encouraging event, all things considered. And my own contribution, if anything, made things worse. I was tasked with speaking about the politics in the UK, and duly pointed out both how visceral and how unpredictable these are.

So where does all this leave us? First, weaker all round. As Van Rompuy put it, Brexit for the EU is more than a setback, “it is a political amputation.” And it springs from problems that are not unique to the UK, notably the questioning of open societies and open economies.

Britain, he warned, will lose out in terms of prosperity and international clout. But so too will the west, already suffering through what he memorably labelled these “grumpy, Trumpy times.”

As for the negotiations themselves, Van Rompuy pointed out that the parties face a perfect dilemma. None of the possible outcomes to the problem of the Northern Ireland border are desirable, whether that be remaining in both the customs union and single market (which would violate the government’s red lines, and infuriate Brexiters) or leaving Northern Ireland in them, and placing the border in the Irish Sea (also politically unacceptable) or no deal at all, which parliament will not accept.

So choices have to be made. And here, interesting divergences emerged.

For the former EUCO President, the only conceivable outcome is that the UK will eventually decide to stay within the single market and the customs union, as any other outcome would be an economic catastrophe. Nothing,” he declared, “is irreversible—not even Brexit.”

Rogers took a slightly different tack. He agreed with me that continued membership of the European Economic Area would not suit either the UK or the EEA. Britain joining the EEA, he quipped, would be like “trying to stuff an elephant in a sock.” It would also be unacceptable in Westminster.

Rather than this, therefore, he floated the idea of another “landing zone” (the phrase du jour, as they say in Paris) whereby the UK remains in a customs union plus the single market for industrial goods and various other things such as agrifood.

Services, meanwhile, would not be covered. Speaking as man used to trade-offs and log-rolling, he pointed out, rightly, that this might appeal to some EU states as it grants continued frictionless trade in those areas where they enjoy a surplus, whilst making trade in services far harder.

So far so logical. What I found most striking about both interventions was the assumption—implicit to be sure—of some kind of rationality about the talks (though Rogers remains far from convinced whether his landing zone can be safely located). I must say I am not convinced.

Neither side in these negotiations is in the business of maximising economic gains as a first priority. For the EU, I suspect the “principle” of the indivisibility of the four freedoms would trump unfettered access to goods trade, even if the UK agreed to be a rule taker when it comes to industrial standards.

As for the UK, I’m not sure we now fit comfortably within the rational maximisation model so beloved of economists. The referendum represented many things. One of them was the triumph of politics over economics.

Evidence of this is gleaned easily enough from the fairytale economics being propounded by both major parties—Brexit leading to a more prosperous Britain (Theresa May) versus a “jobs first Brexit” (Jeremy Corbyn).

The next six months or so will, of course, be decisive. Parliament may intervene and impose some kind of customs arrangement on the prime minister. The government itself, confronted by a barrage of forecasts from its own economists, might start to shift (or “pink” in the parlance) its own red lines.

But I do think there is a real danger in assuming the best. The notion that the people (or their representatives) will, ultimately, vote for what they are told is best for them economically should have been buried on 24th June 2016. It may take another battering as the Brexit endgame unfolds.

By Professor Anand Menon, Director of The UK in a Changing Europe. This piece originally featured in Prospect.