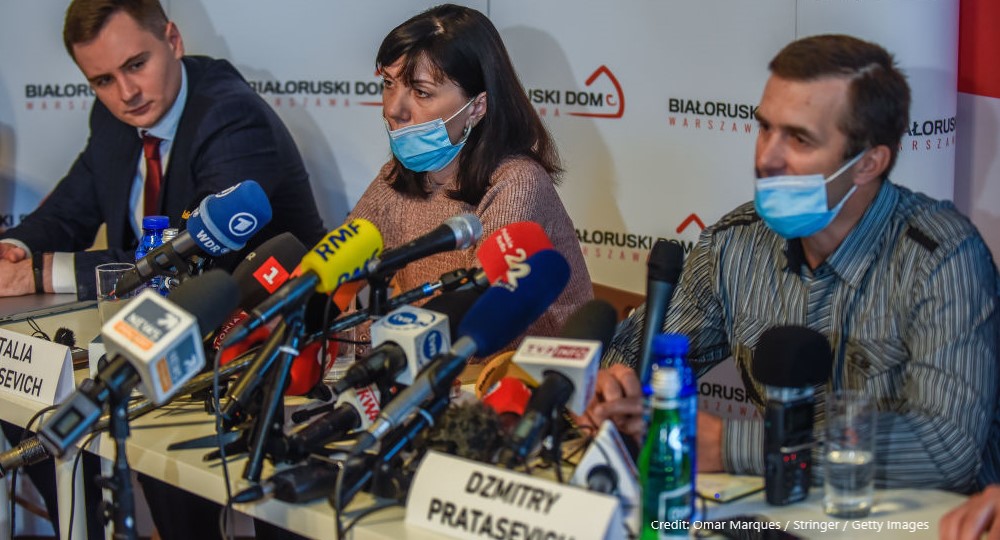 About two weeks ago, the government of Belarus forced a Ryanair flight from Athens to Vilnius to land in their capital, Minsk, ostensibly because of a threat that a bomb was aboard. There was no bomb. Following the hijacking of the Ryanair flight, Belarusian authorities detained a Belarusian opposition journalist, Roman Protasevich, and his travelling companion, before allowing the flight to go on its way.

They have now ‘confessed’ to crimes against the state and/or its autocratic boss. It is alleged, credibly in view of serious abuse of detainees in Belarus in recent months, that those confessions were coerced through torture or the threat of torture.

Protasevich and his companion had every right to travel between EU countries for whatever reason, without interference. Instead, the unfortunate travellers were kidnapped from a hijacked flight by the state in whose airspace they were flying. The interruption and forced landing of an international flight is rare, although not unknown.

In any event, it is a serious violation of standard multilateral norms concerning air travel. Whether this action violates international law, although likely, remains to be determined by relevant international bodies.

Unsurprisingly, the arrest of Protasevich and hijacking of the Ryanair flight have generated considerable indignation in the EU, the USA, the UK, and allied states such as Canada, who appear to be racing each other to see who sanctions Belarus first and most. This interaction has raised concerns about the regional security implications of the situation. On the whole, these concerns are misplaced.

The Belarusian behaviour is reprehensible, but it does not have direct regional security implications, for several reasons.

First, Belarus was a pariah state in Europe before the Protasevich incident. It was already sanctioned by the EU and the United States. Both are increasing their sanctions as a result of the hijacking of the Ryanair flight. That does not seriously change the situation, depending on what kind of sanctions we are talking about.

Their indignation is largely moral and performative, rather than substantial. For example, the EU could go after major Belarusian exports, such as fertiliser products and refined oil derivatives. This they are unlikely to do, because it would create shortages in their own economies. The US, meanwhile, is not a major importer of Belarusian goods.

This brings me to possible security impacts of punitive sanctions on Belarus. In the unlikely event that sanctions were serious, the impact, presumably, would be to drive Belarus further into Russia’s hands.

For years, the Belarusian government has tried to play Russia and the EU off against each other.

But the EU option was never really on the table anyway. The EU has never promised membership to Eastern Partner states. Unlike partner states that have actively pursued association agreements with the EU, Belarus has never seriously pursued such an agreement. Belarus has consistently performed poorly on key EU metrics, such as human rights, free and fair elections and the rule of law.

What the EU seeks is antithetical to the structures of rule (the police, the surveillance state, the courts) that maintain Alexander Lukashenko in power. Their occasional efforts to wean Belarus away from Russia have failed. Russia does not threaten Belarus’s domestic structure of power; the EU does.

Is the Russian alternative actually available for Belarus? Probably not on terms that President Lukashenko would accept. His government is close to Russia, but does not wish Russia to call the shots. Mr. Lukashenko finds it convenient for Russia to subsidise his imports, to lend him money, and to share his unhappiness with the West’s efforts to dismantle his system of absolute power.

But there is no love lost between the two presidents. Both are primarily preoccupied with retaining their own power and position. It is also not clear that the Russian government is willing or able to take on the liabilities of this failing state.

Russian reluctance to take on this burden is longstanding and goes some distance to explain the failure to turn the ‘union’ between Belarus and Russia from myth to reality.

State failure does bring up a more serious dimension to the security question. Lukashenko is already having difficulty in sustaining his grip on power in the face of vocal domestic opposition. His preferred option of repression is expensive.

Belarusians seeking alternatives have developed imaginative alternatives to express their discontent, not least via the web, with Protasevich playing a significant role in the provision of alternative information to his co-citizens. The Protasevich detention and impending show trial will no doubt aggravate discontent further, increasing already substantial popular resistance to the regime.

Where this might end is anybody’s guess. But it is unlikely to go well. If the regime collapses, a substantial international recovery effort will be necessary.

If it does not collapse, the country might end up in a civil war, with attendant needs for humanitarian support and a significant increase in the flow of refugees into the EU. And a dramatic weakening of the Belarusian regime could provoke Russian intervention.

That would have geopolitical implications for Central Europe, since it would increase Russian force levels in proximity to NATO member states, three of which border Belarus.

In this respect the hijacking of the Ryanair flight and the detention of Protasevich, although they have little direct impact on European security, are a symptom of a broader problem: the fragility of a major state in East-Central Europe.

By Neil MacFarlane, Professor of International Relations at the University of Oxford.