How and when might a second referendum on Brexit come about? 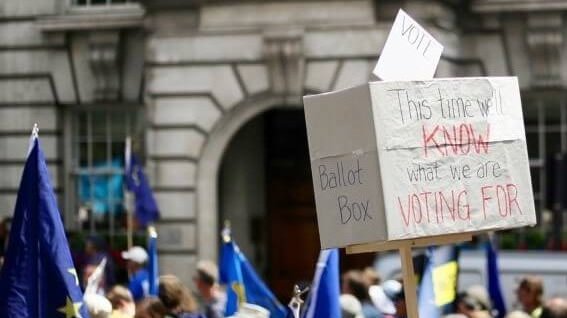 Our new report, The Mechanics of a Further Referendum on Brexit, is published today. Taking no position on whether a further referendum should be held, this explores the constitutional and legal questions that politicians would need to consider if proceeding with such a poll. This post draws on the report’s final chapter to consider how and when a further referendum might occur.

Conclusions from earlier chapters include the following:

In putting together scenarios, the key factors are the trigger point for calling a referendum and the nature of the question. Depending on the trigger, planning might begin any time between November and February (or later, if negotiations with the EU drag out). The minimum timescale between introducing legislation and polling day is 22 weeks for a two-option referendum, or 28 weeks for a three-option poll.

The five basic scenarios can be summarised as follows:

Scenario A: Parliamentary approval of withdrawal agreement made conditional on a referendum

Any deal negotiated between the UK government and the EU must be put to parliament, in the so-called ‘meaningful vote’ motion. This is the earliest likely point at which parliament could insert a referendum requirement. A deal in mid-November could be voted on in late November. If MPs made approval conditional on a referendum and ministers responded quickly by bringing a referendum bill forward in early December, polling day could occur at the earliest in mid-May for a two-option question (‘deal’ versus ‘remain’) or late June for a three-option vote.

Scenario B: Parliamentary approval of the EU (Withdrawal Agreement) Bill made conditional on a referendum

If a deal is reached and MPs approve the ‘meaningful vote’ motion, the government will bring forward legislation to implement the deal – providing a second opportunity to impose a referendum. If this occurred early in the Commons stages, a two-option (‘deal’ versus ‘remain’) poll could potentially take place in early June 2019, a three-option referendum in late July. Even more delay would occur if a referendum requirement was inserted during the bill’s Lords stages: late July with two options, or September with three.

Outright rejection of the ‘meaningful vote’ motion in the Commons would create great acrimony, from which a referendum might emerge. A three-option poll appears most likely, which might in theory be held in late July.

Scenario D: No deal is reached

The UK–EU negotiations could break down at any point, but in the absence of agreement are likely to continue into the New Year. The European Union (Withdrawal) Act sets a deadline of 21 January, after which the government must lay a statement before parliament setting out its intended action. A motion might then be considered in early February. Since most MPs wish to avoid a ‘no deal’ Brexit, a decision to call a referendum is quite likely at this point. With no other alternative available, the question would straightforwardly be between ‘remain’ and ‘no deal’, with an earliest possible polling day in mid-July 2019.

Although the government and the EU are working towards a deal, the negotiations could drag on beyond January. An Article 50 extension would then be necessary simply to continue talking (though there is no certainty that the EU would grant this). If this occurred, any of the scenarios above could play out at some future time, leading to an even later polling day. 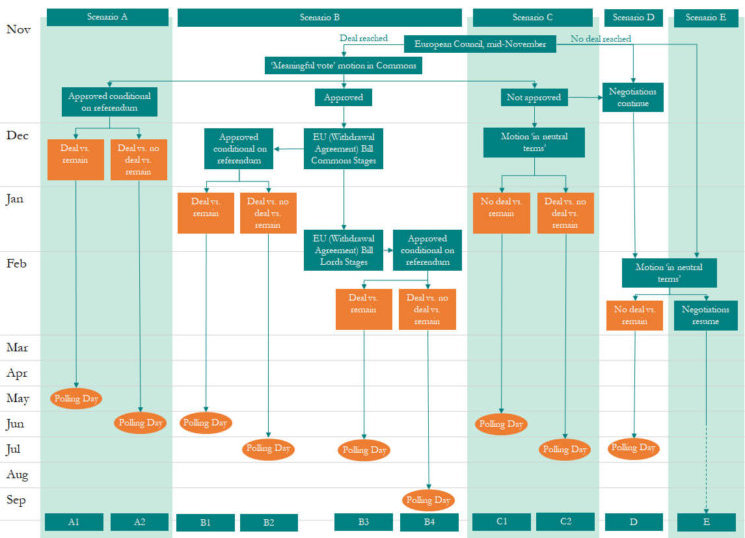 The timetable implications for Article 50 and the European Parliament elections

Any of these scenarios would require an extension to the Article 50 period, which currently expires on 29 March 2019. As discussed in an earlier post, EU leaders would be very likely to agree this – which could happen in parallel with the preparation of legislation for a referendum.

Such an extension would need to run beyond polling day. A decision to leave without a deal would require time for both the UK and the EU27 to implement necessary arrangements, for which at least three months would be needed. Breathing space would also be needed following a vote for a deal or for ‘remain’. An Article 50 extension until late 2019 might therefore be required.

The May 2019 European Parliament elections create the most awkward obstacle in this. The new MEPs will take their seats on 2 July, and if the UK is still a member state then it should under the treaties hold elections and send MEPs. How to deal with this is fully discussed in the report. In sum, the shorter the Article 50 extension, the easier it would be to reach a solution.

How likely these various routes to a further Brexit referendum are remains uncertain, depending on developments in the negotiations, public opinion, and the positions taken by parties and MPs. Our report discusses many key factors that politicians must take into account in thinking through the options. If MPs do decide to press for a referendum, they will need to move with both speed and care.

The Mechanics of a Further Referendum on Brexit, by Jess Sargeant, Alan Renwick and Meg Russell, is published today by the Constitution Unit, jointly with the UK in a Changing Europe. You can read the full report here.

Meg Russell is Director of the Constitution Unit at University College London.

Alan Renwick is Deputy Director of the Constitution Unit at University College London.

Jess Sargeant was a Research Assistant at the Constitution Unit from July 2017 and September 2018, working on referendums.