In the debate over Brexit, accusations of an anti-Brexit or pro-Brexit bias by the media have been a recurring feature.

During the referendum campaign, representatives of both Remain and Leave found a common enemy in the BBC, and in other media outlets whose reporting was allegedly biased in favour of their respective opponent’s position.

Analyses of media coverage in fact highlighted a pro-Brexit bias in major British newspapers and TV news programmes in the run-up to the referendum, arguing that it may have been a contributing factor to the final referendum result.

However, what happened after the battle over Brexit moved back to Parliament and the UK invoked Article 50, triggering the withdrawal process?

In a new paper published in Political Research Exchange we investigate media reporting on Brexit between 1 July 2017 (the formation of the Theresa May’s Cabinet), and 29 March 2019 (the originally scheduled Brexit date).

Rather than focussing on the tone or ideological slant of reporting, our analysis focusses on the visibility of individual MPs.

As the media provide a platform for politicians and familiarizes voters with their positions, the visibility of political actors presents a significant cue of importance.

The academic literature has credited the British press with shaping UK public opinion on the EU over the last few decades. Furthermore, research has linked increased visibility to electoral success. Hence, visibility presents an important and useful indicator of balance and bias in news reporting.

For our analysis, we collected 58,247 newspaper articles published in the print and online editions of major UK newspapers (see an overview here) that mentioned the word ‘Brexit’.

Our variable of interest is the number of articles referencing an individual MPs. We automatically searched the database for MPs’ names to create a count of articles mentioning a particular MP.

Our analysis reveals a number of important findings. First and foremost, we can see that newspapers focussed strongly on MPs from the Conservative Party (see Figures 1a and 1b).

Although the Conservatives only held 48% of seats, 71% of all MP mentions were for Conservative politicians – a difference of 23%. In contrast, Labour politicians remained a side-show.

Despite controlling 37.5% of seats, only 20% of all MP mentions can be attributed to Labour MPs. We can see some differences related to newspapers’ ideological leaning, but nevertheless, the stark differences between Conservatives and other parties are present across all news outlets surveyed.

Even if we exclude frontbenchers, Conservatives are still overrepresented by 13%. 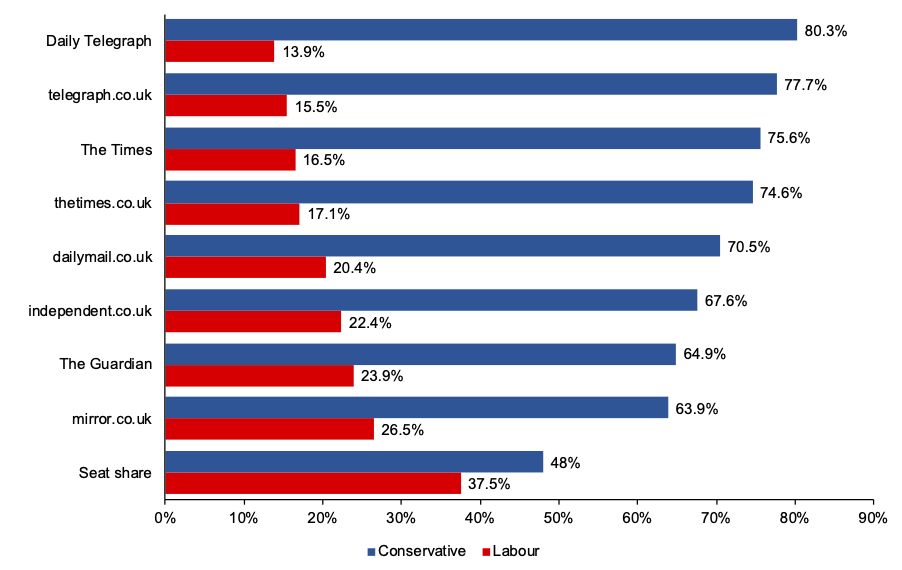 Furthermore, we find that membership in pro-Brexit pressure groups significantly increased the visibility of backbench MPs compared to other backbenchers.

Figure 2 shows the relative visibility of backbench members of the European Research Group and Leave Means Leave compared to all backbenchers of the Conservative party. Members of the two groups were overrepresented by a factor of 1.6 (ERG) and 3.0 (LML), respectively.

Once again, this finding is consistent across news outlets with only slight variation. Organised pressure groups possess greater resources to get their message into the media (e.g. through press conferences or press releases) and provide easily available content.

The figures for the People’s Vote Campaign show that this effect is limited to pro-Brexit positions. Overall, 18.4% of backbenchers were members of the PVC, yet they were only responsible for 21% of all backbencher mentions – a far cry from the visibility of the pro-Brexit groups.

Finally, we find that only a few MPs dominated the debate – the top one percent of MPs are responsible for two fifths of all MP mentions, and the top 10% generate three quarters of mentions.

As one could expect, Prime Minister Theresa May was mentioned most frequently – she featured in 52% of all articles – followed by Jeremy Corbyn, who was mentioned in one out of every five articles. Notably, Jeremy Corbyn is also the only non-Conservative politician who appears in the overall top 10.

Jacob Rees-Mogg is the only backbencher on the list who – unlike David Davis, Boris Johnson, or Amber Rudd – never held a government office during Theresa May’s second cabinet. Finally, except for Amber Rudd and Philip Hammond, all Conservative members on the list hold pro-Brexit views. 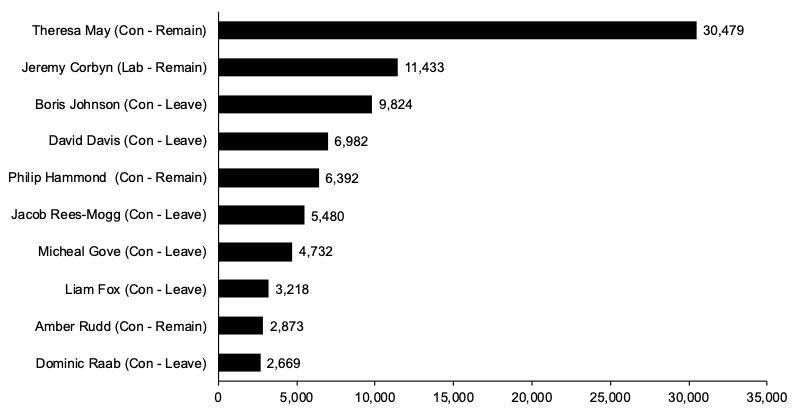 What do these findings mean for British media and the debate about Brexit? It is crucial for any democracy that the media supplies citizens with balanced information about political actors.

This does not mean that every actor should receive the same amount of coverage – we can arguably still speak of balanced coverage if it correlates with political power (e.g. government status) or electoral strength.

However, when news reports systematically prioritize one position, party or group over others, this may have a notable and potentially detrimental effects.

Our research suggests that British newspapers failed to provide their readers with a balanced representation of debates over Brexit during a crucial time – the negotiation of a withdrawal agreement.

While our analysis has not considered the tonality of reporting, studies on the referendum campaign have shown a correlation between mentions and tonality.

We can reasonably assume that extreme opinions voiced by organised interests will continue to occupy a dominant position in news reporting for the time being.

Yet, if the media continues to selectively amplify the voices of those lobbying for a hard Brexit, this will have substantive implications – not only for citizens’ ability to make informed choices in the next election, but also for the future relationship between the UK and the EU.