How do MPs think the UK will fare after Brexit?

Amid all the noise, it is sometimes easy to forget that Brexit is driven by competing long-term visions for the UK. The annual surveys organised by the UK in a Changing Europe and the Mile End Institute have asked MPs a series of big picture questions, requiring them to peer ahead and look beyond the immediate, to help us understand how they think both the UK and the EU will fare after Brexit.

Polled in November and December 2018, MPs’ answers reveal very different hopes and fears about what it will mean for the country’s future.

In general, MPs expect the economy to improve over the next decade. This is perhaps unsurprising – after all, economic forecasts on the impact of Brexit differ only over the level of overall growth, rather than the existence of it.

Some 60% of MPs think that the general economic condition of the country will improve over the next ten years – the view of 83% of Conservative MPs, and a slim plurality (42-36%) of Labour MPs.

However, as figure 1 shows, differences between MPs who voted Leave and Remain are almost as important as those between parties. MPs in favour of Brexit have a far sunnier economic disposition than Remainers: 85% of MPs who voted Leave expect an upward trajectory, against just 47% of those who voted Remain. 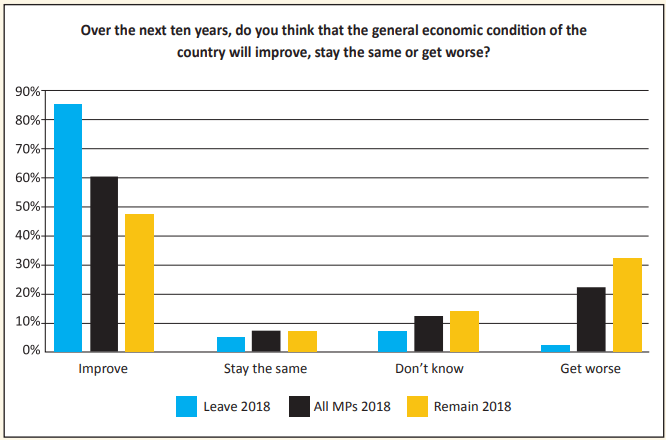 The economic optimism of Conservatives can be largely explained by the fact they overwhelmingly buy into the idea that trade policy will have a net positive, or at least neutral, effect.

Some 58% of Conservatives, and 66% of Leavers, expect the benefits of an independent UK trade policy to more than outweigh any costs of Brexit – numbers which rise to 85% and 95% respectively if we include those that anticipate no net trade-off for the economy.

And despite the rocky progress that Brexit has made – and the fact that few talk anymore of trade deals being the “easiest in human history” – the optimism of Leavers remains almost identical (indeed, if anything slightly higher) to when the same question was asked in 2017.

Immigration was a determining factor in the referendum outcome and has been a driving force behind government policy on Brexit since.

Overall MPs expect the downward trend on net migration numbers to continue over the next five years: only 26% of MPs think immigration will increase, while 48% expect immigration to the UK to fall between now and 2024.

There was also no discernible difference between Leavers and Remainers on this point – 46% of Leavers expect a fall, as do 49% of those who voted Remain.

Implicit in this data – and the fact pro-Brexit parliamentarians are much more optimistic about the economy and the UK’s direction – is the fact that a majority of MPs continue to be convinced, for better or worse, that Brexit will happen.

When we asked whether MPs expect the UK to become a member of the EU again in the next 20 years, only 24% of MPs thought that was likely. Perhaps unsurprisingly, no Conservative or Leave MPs expected this; yet by 45% to 37% even Remain MPs felt that a reversal of Brexit was not on the cards.

MPs view what is likely to happen around Brexit through the same partisan lens as voters. Brexit looks very different to MPs who voted Remain than it does to those who voted Leave.

There is perhaps some cold comfort in this: Parliament represents the views of a country where interpretations of evidence about Brexit are similarly motivated by identities formed by their Brexit vote (see this piece by Hobolt and Tilley).

So, MPs are largely of the view that Brexit will happen, but they are split on their prognosis for what it is likely to mean. They are also not agreed on the diagnosis of what has caused social and political division in the country.

If you are an MP who voted Leave, you are overwhelmingly likely to think the process of Brexit has highlighted divisions that were already present in society: 78% of Leaver MPs subscribe to this view.

Those who voted Remain, on the other hand, have a far more mixed perspective: 52% think the principal effect of Brexit was that existing divisions were exposed, but 39% think that the creation of new division has been the more important outcome.

We have a divided Parliament, but perhaps one increasingly aware of the divided country it represents.

By Dr Alan Wager and Professor Philip Cowley. You can read the full report on ‘Brexit and public opinion 2019’ here.