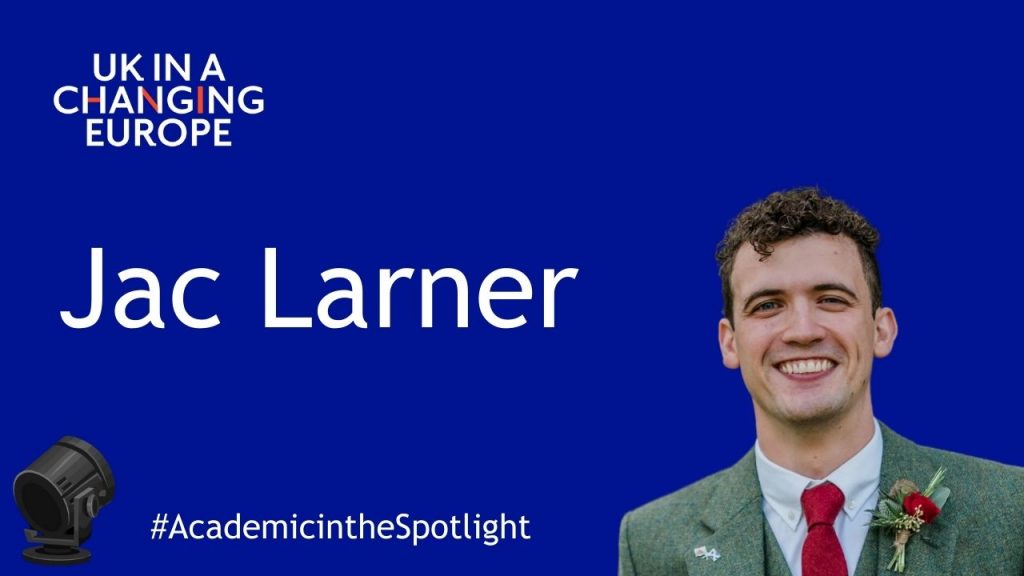 What are you currently researching?

I’m currently working on the Welsh and Scottish Election Studies with colleagues across the UK. Given the wide scope of these studies, I am working on a range of subjects from the UK’s constitutional future to affective polarisation and group identity to perceptions of welfare deservingness.

Within all of this I am particularly interested in national identity, and how it shapes our political attitudes and behaviours. I’ve always found it fascinating that some of the oldest territorial divisions on the island of Britain still maintain distinct political cultures and identities.

In each of the constituent nations of the UK, these identities play a substantial role in how we see ourselves and perceive the world, from influencing the Brexit vote to shaping perceptions of government competence dealing with Covid-19.

What led you to research this topic?

Partly personal experience. I’m from the South Wales valleys and the sense of Welshness and Welsh identity was always incredibly strong there. It always seemed obvious to me that this had a considerable influence over people’s political behaviours and opinions. I’ve since lived in the south of England and Edinburgh and haven’t seen much to change my mind!

Academically, I was really encouraged to pursue this are of research after moving to Cardiff University for postgraduate study. There, I worked as a Research Assistant at the Wales Governance Centre for Richard Wyn Jones and Roger Scully and ended up working on the 2016 Welsh Election Study. The study of politics in Wales has always emphasised the importance of National identities (those identities being Welsh, British and English) and so I was heavily influenced by that.

Since then I have been lucky to work on multiple election studies in Scotland and Wales, and worked closely with colleagues like Ailsa Henderson and Paula Surridge to expand this work outside of Wales.

What impact, if any, have changes in British politics and society over the last decade had on your area of research?

It feels like they have had a massive impact. The 2014 Scottish independence referendum, 2016 EU referendum and Covid-19 pandemic have all led to an increase in interest in the role of national identity in political behaviour and attitudes.

It used to be something of a fringe subject only really discussed seriously when talking about Scotland and Wales (and occasionally Northern Ireland), but it now feels like it’s of far more mainstream interest.

I think the reason for this is that these events, and surrounding elections, have really highlighted the territorial heterogeneity of the UK (for example, since the 2015 general election a different party has been the largest party in England, Northern Ireland, Scotland and Wales).

They have also all highlighted the UK’s many fragile constitutional settlements, which in turn has raised the salience of these identities in the electorate.

What’s the best advice you’ve ever been given as an academic? And the worst?

Best advice: study what genuinely interests you. Publications will follow from that, and you’ll be far happier for it.

Worst advice: You should be able to condense your thesis into a two-minute elevator pitch for big conferences. I’ve yet to be at a conference where something like this would have actually been a useful skill.

If there was one bit of social science research you would encourage people to read, what would it be?

It’s not particularly sexy but it would probably be ‘The Psychology of Survey Response’ by Tourangeau, Rips and Rasinski (2000). It serves as an excellent reminder of how careful we should be when making any inferences from survey data. As someone who currently spends several hours a week trudging through survey data, its invaluable.

By Jac Larner, Lecturer in Politics at Cardiff University.