How does the EU decide who gets the top jobs? 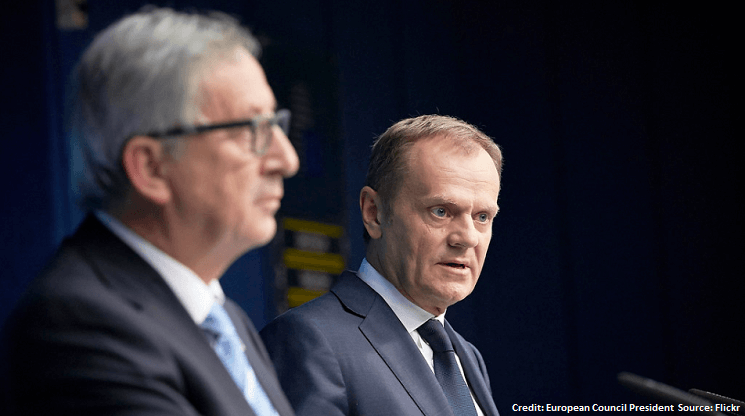 EU leaders meet prior to the start of a new legislative phase to decide the distribution of the EU’s ‘top jobs’. These are the leading political positions in the main EU institutions—the Commission, Parliament, European Council and High Representative for Foreign Affairs—and are typically negotiated as a package to ensure balance between the competing interests and priorities of the member states and the political groups.

We have become accustomed to EU leaders being united during the Brexit process. However, the truth is that the Brexit process is exceptional in this respect. When it comes to crucial issues like the high political offices of the union, deep-seated divisions exist among member states across a range of divides, be it geographical, political, demographic or even personal.

As the most recent negotiations on the top jobs have shown, they can be time-consuming and differences seemingly impossible to resolve. But the sheer complexity of the trade-offs EU leaders are contending with cannot be ignored. The chart below shows the main overlapping priorities that have to be taken into consideration, and there are arguably more. These include: overall suitability of candidates, treaty requirements and political interests.

Firstly, EU leaders have to consider the suitability of the candidates for these jobs in terms of their experience, values and policy priorities. Each role requires someone who believes in and can contribute to delivering the EU’s strategic agenda. Furthermore, the personality of the candidates involved matters more than might be thought. It often pays to be the least disliked candidate rather than the most high-profile.

Second come treaty requirements. The Lisbon Treaty states that ‘due account is to be taken of the need to respect the geographical and demographic diversity of the Union and its Member States’ in distributing these positions. In practice, this means that eastern and Mediterranean member states must be represented in these positions. It also means that someone from a smaller member state needs to occupy one of the posts to ensure a prominent voice for these states who, after all, make up a majority of members. Finally, there is an increasing recognition that the positions need to be gender-balanced, which means at least two of the political positions need to go to a woman.

Finally, in terms of political interests, a balance has to be struck between the main political groupings—the centre-right EPP, the centre-left S&D and the liberal Renew Europe. Following the European Parliament elections in May, the EPP won the most seats, but lost some relative to the previous election, the S&D came second but also went backwards, while the liberal group made substantial gains. This means in practice that each group would logically have a representative in at least one of the positions.

This matrix, understandably, takes a bit of work to figure out. In 2019, this is not least because the rise of the liberal group as a strong force, which marks a change in dynamic from the traditional bargaining of previous cycles between the ‘grand coalition’ groupings of the centre-right and centre-left. Four into two is easy, four into three, less so.

The chart below shows how EU leaders managed the trade-offs in 2014. It was complicated enough. But gender balance was a secondary issue then, which is not the case now. And having a third major grouping creates an imbalance. This means the distribution of positions cannot be proportional to the strength of each group in the European Parliament.

EU leaders work to a hard deadline of the first sitting of the new European Parliament. If they can’t decide on the package before then, the Parliament will elect its own president regardless. This would reduce the political positions available for leaders to bargain over to three and add yet another complicating factor into the mix.

The top jobs process was already fiendishly complex before different priorities and a new political landscape were thrown into the pot. One thing is for sure: things aren’t getting any less complicated.

By Matthew Bevington, researcher at the UK in a Changing Europe. This piece was originally published in E! Sharp.