The Conservative Party leadership contest has made 2022’s summer silly ‘season’ unusually frantic. So far tax policy has been its defining issue.  Liz Truss promises immediate cuts. Gripping inflation is Rishi Sunak’s first priority. He has also questioned the economic benefits of his opponent’s plan to keep corporate tax rates low. But Sunak also promises income tax cuts; some before the next general election, and a 20% cut to the basic tax rate by 2029. Though there is some substance to their much-discussed tax policy clash, both candidates are small-state Conservatives. UK in a Changing Europe’s recent report with Full Fact shows the new PM will face challenges across a wider policy landscape. All but ignored in the leadership contest, they range from inequality and climate change to demands on major public services. Generally, they create pressure to increase public spending, making some see tax cuts as a ‘bold move right now’ politically.

The candidates have struck different postures on how to mitigate the tightening squeeze on living standards. Truss has rejected the use of ‘handouts’, a position Sunak rapidly repudiated – reflecting his record of designing bespoke responses to urgent social problems as Chancellor. Yet both candidates tend to see welfare benefits as an expensive drag on the economy. Setting UK’s basic system of social transfers in a longer historical perspective and wider comparative context paints a rather different picture.

Generally, Britain turns out to be less generous than most other high-income countries. Comparative Welfare Entitlement Project (CWEP – Version 2022-01) data (updated earlier this year by political scientists Lyle Scruggs and Gabriela Ramalho Tafoya) show Britain is one of only four countries to see a large fall in overall Welfare Benefit Generosity (WBG) over the past forty years. Alongside the UK, Denmark, Sweden, and New Zealand saw WBG in 2018 more than 10% lower than its 1980 level. 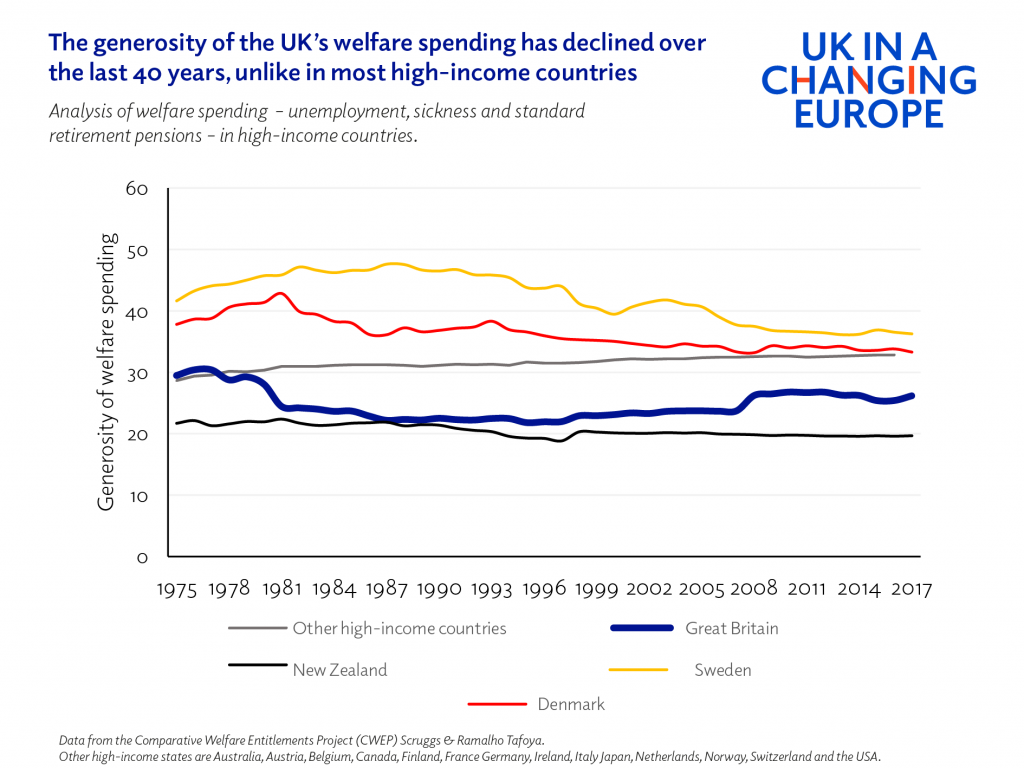 These patterns challenge widely held views. First, the period up to the mid-1970s is generally regarded as the welfare state’s golden age. Yet in most countries social benefits were more generous in 2018 than the mid-1970s. Second, WBG fell most heavily in Denmark and Sweden, two countries often regarded as exemplary welfare states. They no longer top the benefit generosity league tables.

Third, the UK has a highly distinctive record. Almost uniquely, benefit generosity in Britain fell sharply in the early 1980s from its all-time peak in 1978. The data show the impact of Mrs Thatcher’s brand of Conservatism on welfare generosity. A rapid fall in the early 1980s was followed by a steadier decrease until 1988. Deputy Director of the Institute for Fiscal Studies, Robert Joyce, describes a similar trajectory from the 1980s for income inequality.

It is hard to overemphasize the idiosyncrasy of the UK’s fall in WBG falling after the so-called golden age: Thatcherism was atypical. Benefits bumped along at a low level for the next decade or so. Their generosity rose a bit under Tony Blair and ticked up again when Gordon Brown was Prime Minister. Compared with almost all European countries, though, WBG in Britain has been low since the early 1980s.

Dig into the measure of WBG and the UK looks even more starkly distinctive. The overall indicator combines three types of benefit – unemployment, sickness and standard retirement pensions. It hides an increase in standard pension generosity in 2018 over 1980. UK sickness benefits became a bit more austere; the generosity of unemployment benefits collapsed. They show the highest percentage fall – at 44% – of any benefit in the CWEP dataset. Among similar countries, only Greece and Japan have less generous unemployment benefits than the UK.

Measuring generosity directly helps assess the protection key benefits offer against impacts of unemployment, sickness and old age. By contrast, levels of social spending reflect a mix of generosity and the number of people relying on benefits. Constructing a consistent and comparable indicator of generosity a complex business. Like any constructed measure including one as widely used and influential as Gross Domestic Product, WBG offers a particular view of the phenomena it considers.

For example, during the 2000s Labour’s tax credits targeted resources at low-income households in- and out-of-work, particularly benefiting families with young children. They enabled a substantial reduction in child poverty. After 2010, the fitfully introduced, still incomplete Universal Credit system initiated under David Cameron picked this system apart. Not focused primarily on low-income families, WBG does not register big changes during these episodes.

Mrs Thatcher’s approach to social benefits lives on. Despite raising some 400,000 children out of poverty, Johnson’s government decided not to make the Covid-related £20 weekly increase in Universal Credit permanent. The incoming Prime Minister will confront serious challenges. But whoever takes over, pressures on public spending, concerns about welfare dependency and work incentives seem set to retain priority over the benefit system. Britain’s economy generates precarious jobs and leaves many in poverty. Viewed comparatively, austere benefits look like a symptom of that low-wage, low productivity economy. A benefit system which helps channel people into precarious and poorly paid jobs will hardly help cure Britain’s economic disease.

By Professor Dan Wincott, Director of Governance after Brexit and Blackwell Law and Society Chair in Cardiff University’s School of Law and Politics.