How good are the experts’ predictions about Brexit? 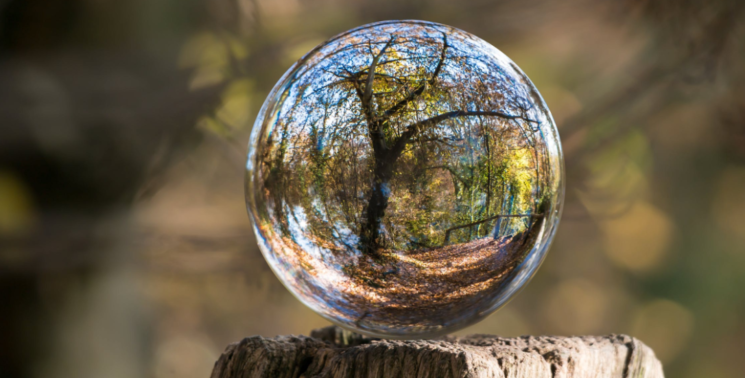 Faith in academic experts has risen since the referendum. When YouGov polled the public on who they trusted most when trying to understand Brexit, economists from think tanks and universities came top of all professions listed. Thomas Sampson’s analysis shows the pre-referendum economic forecasts of experts have been broadly validated.

We created a Brexit Policy Panel of over 100 leading social scientists working on Brexit to give us their monthly assessment on where things were heading. Based on their knowledge and expertise, the idea was to take the temperature of expert opinion to give a collective sense of what expectations were. And, in many cases, they have proven prescient.

Now that we’ve reached the end of the original two-year negotiating period, we can assess how accurately they predicted what happened. Their answers also help provide a route map for what is likely to come next.

First, the negotiations. Our panel were always sceptical about the original timetable set out for the negotiations. In August last year, we asked them whether there would be a deal by the October 2018 European Council meeting – the original deadline for a deal – and they were overwhelming pessimistic: they scored the likelihood at just 2.1 out of 10. This turned out to be accurate. A deal was not reached in principle until 14 November.

Clearly, the most contentious part of the Withdrawal Agreement has been the backstop. Over time, our academics have come to the consensus view that a border on the island of Ireland will be avoided. Mostly, this is because, since November, around half expected a regulatory border between the UK and the EU to be situated east-west, as set out in the backstop.

In the same period, around a quarter expected there to be no regulatory border at all. These are significant shifts since July, when the largest share of experts thought the regulatory border would end up being north-south, on the island of Ireland.

In January, prior to what looked – and turned out to be – an inevitable defeat of Theresa May’s deal, our experts’ sense of what the EU would be willing to change in the deal proved largely correct. Just over 7 out of 10 of our panel thought that substantive political assurances, short of legal changes to the text of the Withdrawal Agreement, would be forthcoming from the EU. This turned out to be the case with the publication of a Joint Interpretive Statement.

Given the Article 50 period proved insufficient to negotiate and ratify a Withdrawal Agreement, would a transition period be sufficient to complete the future relationship talks? Our academics have been sceptical to say the least. The basic transition period, running from the UK’s exit date to the end of December 2020, has consistently been seen as inadequate.

However, our panel think there is substantially more chance of completing the negotiations by the maximum extension of transition—to the end of 2022. On average, since December, this has scored 24 percentage points higher than 2020, with around a further third of our academics unsure whether even this would be sufficient.

Perhaps the most important questions we asked related to the future relationship with the EU. Each month, we asked what customs arrangements our panel expected beyond any transition period. A number of things are striking: first, according to our experts, a number of options remain in the running even now, from a free trade agreement to the backstop arrangement; second, the likelihood of a free trade agreement has diminished substantially over time – the most likely outcomes now all imply a closer customs relationship; and, third, reverting to WTO terms was never considered a realistic outcome.

We also asked our academics a similar question on the UK’s future relationship with the EU single market.

Again, there are some notable trends. First, as with the customs relationship, a diminishing share of our panel expect a Canada-style free trade agreement to be the eventual outcome; second, a Norway-style agreement is seen as equally unlikely; third, the most likely outcomes – a Swiss-style, bespoke agreement or a Chequers-style access for goods but not services agreement – are likely to be tailored to the UK rather than ‘off-the shelf’; and, finally, again, the WTO has never been considered realistic. 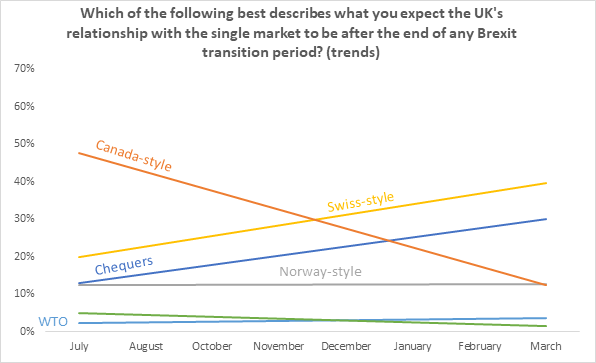 Of course, our academic experts have not got everything right – that would be unrealistic. But they have generally been able to see the underlying patterns that have often been drowned elsewhere by the ongoing political drama. When it comes to Brexit, perhaps public faith in academic expertise is warranted after all.

By Matt Bevington, a researcher at the UK in a Changing Europe. This article is from our ‘Article 50 two years on’ report. Take a look at the results of our Brexit Policy Panel.