How Leavers and Remainers view the economy through a Brexit lens

On the 23 June 2016 UK citizens voted to leave the European Union, after a heated referendum campaign where the Remain camp highlighted the economic dangers of Brexit and the Leave camp promised to bring back control of borders and reduce immigration (see Vasilopoulou 2016).

We know that group identities, such as party identification, tend to shape how people select and interpret new information, sometimes leading to ‘cognitive illusions’. Similarly, our study finds that the new Brexit identities have indeed resulted in distorted (or ‘biased’) images of the key issues of the economy and immigration levels.

To examine how Brexit has shaped such views, we use data from the British Election Study (BES) 2014-2017 panel. This allows us to compare assessments of the economy and immigration by Leavers and Remainers before and after the Brexit vote.

It is worth noting that data from the Office of National Statistics shows minimal changes in key indicators of UK growth and immigration rates in the 2016-2017 period.

Hence, if perceptions were not biased by the referendum vote, we wouldn’t anticipate substantial changes in people’s views. However, if the emerging Brexit identities play a role, we expect people to view changes in the economy and in immigration in ways that confirm their referendum vote: Remainers should become more pessimistic about the economy after the vote, while Leavers should become more optimistic about immigration (i.e. observe lower immigration levels).

To see if that is the case, we measure economic and immigration perceptions are using the following survey items of the BES:

Figures 1 and 2 below represent graphically the results (based on ordered logit panel regression models). 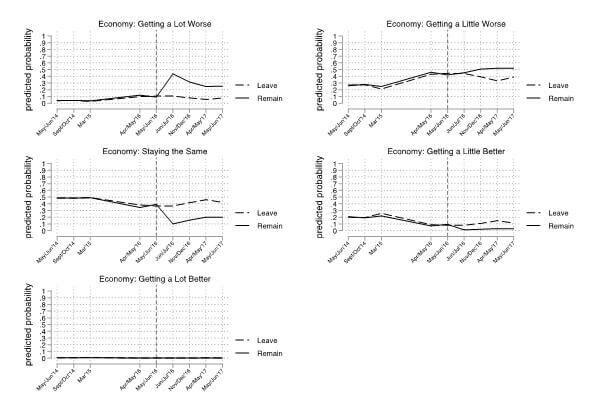 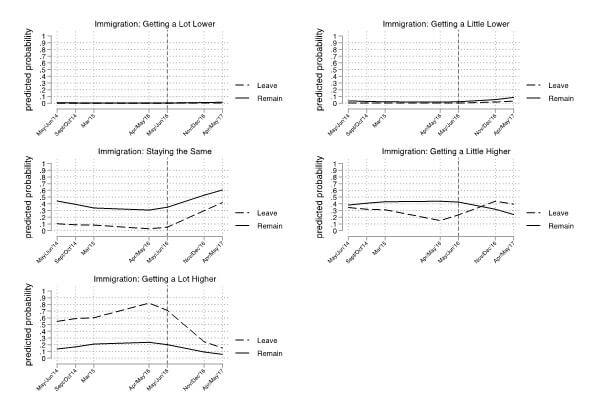 The figures clearly demonstrate changes in economic and immigration perceptions (by Remain-voters and Leave-voters, respectively) immediately after the referendum occurred.

Remainers became noticeably more pessimistic about the economy after the Brexit referendum, while Leavers perceive immigration rates as lower, in line with the respective campaign promises.

We can see very clear differences before and after the Brexit vote in perceptions of the main campaign issues, the economy and immigration – holding constant partisanship, gender, age, education and income. This is despite the fact that the UK had yet to leave the EU, and actual changes were limited.

What about differences in the perceptions of Leavers and Remainers? Have they converged or diverged in the aftermath of the vote? In the case of economic performance evaluations, Leavers and Remainers shared very similar assessments before the referendum, but started diverging immediately after the vote.

There is a clear contrast when it comes to the immigration issue: Remainers and Leavers held starkly different perceptions of immigration rates before the referendum, but they started converging afterwards, with Leavers approaching Remainers’ evaluations.

In addition to this panel regression analysis, we have also run a survey experiment run in July 2018 to examine how Remainers and Leavers respond to economic facts.

Figure 3 shows how UK economic growth was ranked in comparison with other developed economies by Leavers and Remainers after respondents were given information about growth rates.

The results clearly demonstrates that even when provided with information on UK growth from the Office of National Statistics, Leavers and Remainers still rank the performance of UK growth vis-à-vis the other 34 OECD economies significantly differently. 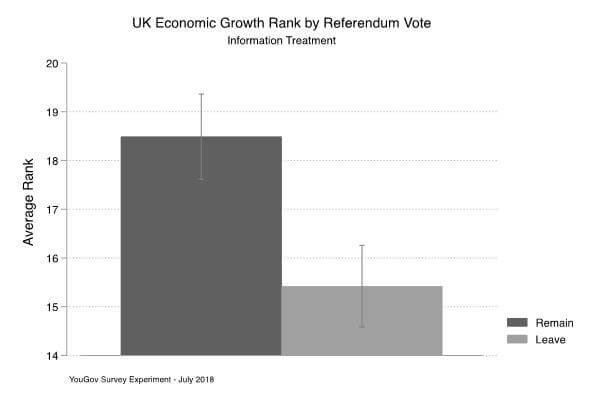 Our study highlights that in the aftermath of the referendum, citizens view economic and immigration politics through new Brexit-tinted glasses. Leavers and Remainers immediately responded to the referendum result by updating their opinions in line with the respective referendum campaign promises and beliefs. Similar to party identity, the Brexit referendum has thus biased people’s view of key political issues.

This divide between Remainers and Leavers in their economic perceptions is likely to make any attempt to foster national unity around an eventual Brexit negotiation outcome more difficult, as Remainers will focus on the negative economic consequences, while Leavers will see the developments in a very different, and more positive, light.

When there is no agreement about the basic facts of economic and policy developments, it becomes far more difficult to find a consensus about appropriate policy solutions. It also complicates matters for those who advocate a second referendum on the basis of “what we now know to be the consequences of Brexit”.

Given the divergence in views, a second referendum would likely lead to another clash between ‘project fear’ and ‘project hope’ strategies, potentially deepening the divide.

By Sara Hobolt, Brexit research leader at The UK in a Changing Europe and Dr Miriam Sorace, LSE Fellow in EU Politics.