How many non-EU workers have to meet the £30,000 minimum income requirement? 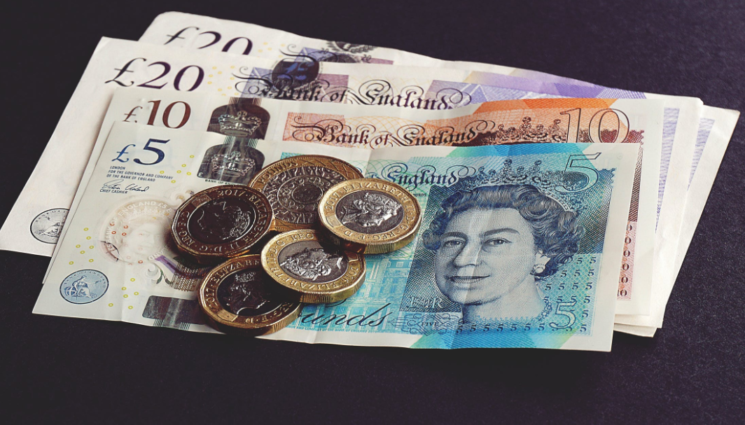 When the Government published its white paper on the UK’s post-Brexit immigration system, one of the main questions that provoked debate was the salary thresholds that EU and non-EU citizens will both have to meet after Brexit if they want to come here for work.

In the proposed system, migrants planning to live and work in the UK long term would have to be doing a skilled job and receive a minimum salary, as non-EU citizens currently have to do when they come to the UK on ‘Tier 2’ work visas. Currently, the minimum salary for most experienced workers coming from non-EU countries is £30,000.

The White Paper does not commit the government to a specific level in the future system, instead saying that the government will “engage businesses and employers as to what salary threshold should be set”— although the economic modelling of the impacts of proposed policy changes (provided in an annex to the White Paper) does take £30,000 as the baseline.

As a result, the £30,000 figure has received much attention. Many business groups have argued for significantly lower thresholds, arguing for example that a threshold at this level could damage the NHS, affect the UK’s video games industry or contribute to demographic problems in Scotland.

As this debate rolls on, it is important to remember, however, that there isn’t just one salary threshold in the UK Tier 2 work visa system. In reality, things are a lot more complicated, and there is no reason to believe that this would be different in a future system. Whatever level the threshold is eventually set at, there are likely to be many workers who don’t have to meet it, if current policy is anything to go by.

This is confirmed by new data from a Freedom of Information (FOI) request submitted by the Migration Observatory, which shows that among non-EU citizens currently receiving their first Tier 2 (general) work visa, 25% were being paid less than £30,000 in 2018.

Debates about salary requirements often focus on the impacts on the NHS, not least because most nurses do not earn enough to meet a £30,000 threshold. What often gets lost in this debate is that they do not have to.

There are some important exceptions to the current £30,000 salary threshold for non-EU citizens on Tier 2 visas. The first is for ‘public service occupations’, a group that comprises nurses, medical radiographers, paramedics and secondary school teachers in certain subjects (maths, physics, chemistry, computer science and Mandarin). People in these roles instead have to meet the standard rates of pay for these jobs – such as the NHS ‘Agenda for Change’ pay-scales – so long as it’s at least £20,800. (Pre-registration nurses can be paid even below this amount.)

The second exception is for “new entrants” to the labour market. This includes non-EU workers under the age of 26 on the date of their visa application, as well as people switching from a study visa to a work visa (Tier 2). For these people, the minimum salary sits at £20,800 per year.

This reflects the fact that people in the early stages of their careers cannot necessarily be expected to command the same salaries as those with several years of experience. Unlike the exception for nurses and other public service occupations, the new entrant exemption is temporary. After 3 years, new entrants must receive at least £30,000 if they want to stay in the UK on a Tier 2 visa.

The White Paper indicates that there could be further exemptions from the main salary threshold, for example for ‘shortage occupations’, although the details of how this would work are not yet known.

At the same time, some non-EU workers under current Tier 2 rules must earn significantly more than £30,000. For example, the minimum salary is as high as £76,000 for consultant doctors (in line with NHS pay scales), £69,600 for aircraft pilots, £38,400 for electrical engineers and £33,300 for civil engineers. This is because there are additional occupation-specific earnings rules on top of the overall minimum pay requirements, with higher requirements in better-paid occupations.

Who currently qualifies for visas on less than £30,000?

In 2018, 25% of non-EU citizens receiving their first Tier 2 (general) visa were to earn less than £30,000, according to Home Office data on Certificates of Sponsorship (CoS), obtained by FOI request. 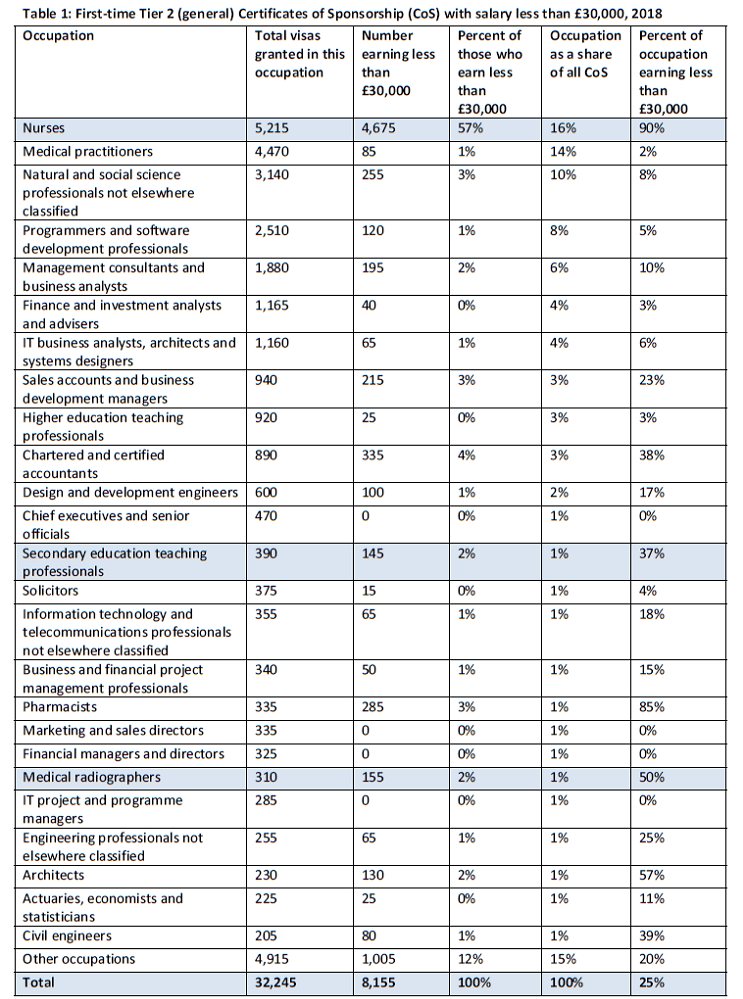 (Source: Migration Observatory analysis of Home Office data. Notes: Figures are for the salary stated on the Certificate of Sponsorship. Not all workers issued a certificate of sponsorship will apply for visas or enter the UK. Figures exclude extensions for applicants who are already in the UK on a Tier 2 (general) visa, but include those switching from student visas. Figures are rounded to the nearest 5 and may not sum to totals because of rounding. Occupations listed individually were issued at least 200 CoS. Shaded rows denote occupations subject to the public service occupations rule. The total number of CoS issued exceeds the 20,700 cap, primarily because some jobs are not subject to the cap; this includes doctors and nurses after.)

The remaining 40% of workers who earn less than £30,000 will have had to meet the ‘new entrant’ criteria, since their occupation alone would not qualify them for a lower salary. Outside of the designated public service jobs, the occupations with the largest numbers of people earning under £30,000 were accountants and pharmacists. The share of those earning less than £30,000 was highest among pharmacists (85%), physiotherapists (60%) and architects (57%). By contrast, 2% of medical practitioners – the second most common occupation in 2018 – were earning below £30,000.

Because the ‘new entrant’ exemption is temporary, these people will have had to receive pay increases in order to remain in the UK beyond 3 years. 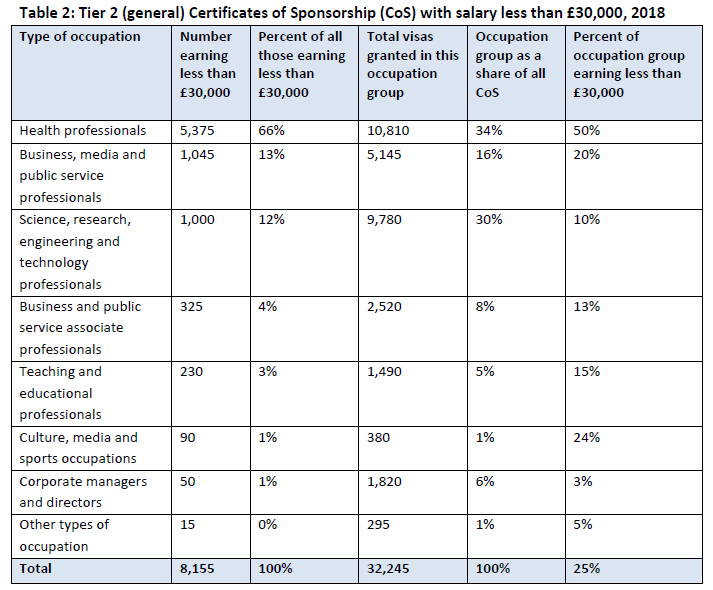 (Source: Migration Observatory analysis of Home Office data. Notes: Figures are for the salary stated on the Certificate of Sponsorship. Not all workers issued a certificate of sponsorship will apply for visas or enter the UK. Figures exclude extensions for applicants who are already in the UK on a Tier 2 (general) visa, but include those switching from student visas. Figures are rounded to the nearest 5 and may not sum to totals because of rounding. Types of occupations listed individually were issued at least 50 CoS with salaries below £30,000. The total number of CoS issued exceeds the 20,700 cap, primarily because some jobs are not subject to the cap; this includes doctors and nurses after June 2018, as well as people switching from study to Tier 2 visas and people earning salaries above £159,600.)

Considering that one quarter of sponsored Tier 2 workers in 2018 were not expected to meet the £30,000 salary threshold, it is clear that policy debates that discuss this threshold as if it is a single amount are missing important detail.

The immigration White Paper suggested that further exceptions could be added. In addition, the government has proposed to create a short-term work route for up to one year, which would not be linked to specific jobs or employers and therefore would have no salary threshold.

In other words, the current policy debate about a single “£30,000 threshold” is too simplistic. It makes more sense to think of current Tier 2 salary requirements as a set of multiple thresholds rather than a single amount.

By the Migration Observatory.