How much trouble is Theresa May in? Here’s the evidence 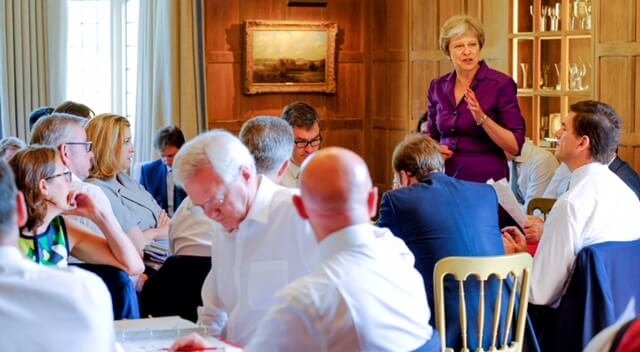 Two Cabinet ministers down, backbench unrest brewing, and continued deep divisions over Brexit. Has Theresa May’s government finally run out of road? Listen to the hype, and you’d probably assume so. Consider the rules, and Theresa May looks a whole lot safer.

Obviously, the starting point of this analysis is turds. Stools occupy a surprisingly prominent place in recent Tory party politics. “Polishing a poo” was how the mild mannered back bencher Steve Baker described David Cameron’s attempt to sell his “renegotiation” of the terms of British EU membership to the House of Commons back in 2016. His intervention was crucial in shaping the parliamentary party’s response to Cameron’s efforts.

Fast forward 27 months and another stool appears. Former foreign secretary Boris Johnson apparently accused prime minister Theresa May of attempting to “polish a turd” in selling her shiny new Brexit policy to the cabinet. He subsequently resigned, saying he couldn’t support her plan.

It was in fact Baker’s decision to leave his position as a junior Brexit minister in the wake of the cabinet’s crunch meeting at Chequers that provided the first hint that the resignation of David Davis might become something akin to a more general Brexiter walkout.

But equally, the fact that he didn’t spark a more general departure – to date at least – speaks to the limits of this rebellion. Moreover, that the prime minister managed both to hang on to a key Brexiter in the form of Suella Braverman and recruit Dominic Raab as Brexit secretary to boot represented something of a triumph for Downing Street.

So what happens now? Reading the runes of British politics has become something of a mug’s game. But to understand how realistic Johnson’s leadership ambitions are, it’s certainly worth consulting the rulebook. And the rules in this case are the 1922 Committee rules on the election of the Conservative party leader.

The first thing to say is that the primary electorate is made up of Johnson’s peers in the House of Commons. Few doubt the former foreign secretary still nurtures ambitions for higher office, or that his resignation was intended to further those ambitions. Many also feel, however, that these ambitions have been damaged by the choreography of his resignation.

On Friday, he promised to get behind the Chequer’s plan. On Sunday, he watched David Davis resign and did nothing. It was only on Monday that he took his decision. The key charge against Johnson – that his ambition outweighs his principle – fairly or otherwise, appears strengthened.

But, in any case, the rules make it very difficult to get to a point where Johnson is a leadership candidate. Triggering a vote of no confidence in Theresa May is relatively easy. The process is kick-started when Graham Brady, the tight-lipped chairman of the 1922 Committee receives letters from 48 Conservative MPs – 15% of the parliamentary party – calling for the prime minister’s resignation. By some estimates, the pro-Brexit European Research Group of Tory MPs has some 60 members, so this should be easy enough.

Triggering a vote is one thing. Winning it quite another. For this, the rebels would need to garner the votes of 158 MPs. It’s hard to see how the ERG can muster this kind of support.

Of course, the rules do not always reflect political reality. While Downing Street maintains that the prime minister will soldier on even if she wins any hypothetical contest by just one vote, it’s far from clear she would be able to do so.

Margaret Thatcher defeated Michael Heseltine by 204 votes to 152 in 1990, with roughly 55% of Conservative MPs backing her leadership. But she emerged fatally weakened. A rebellion of a hundred or more would leave May in similar trouble.

But would she go? Form to date suggests not. May is many things, but she is certainly not a quitter, or she would have gone following the disastrous election of 2017. And facing down a Brexiter challenge may, in fact, reinforce her position.

The rules state that only one leadership challenge can be launched within the space of a year, so she would be able to pursue her chosen Brexit course without fear of the ERG attempting to depose her again.

This would shift the goalposts. Instead of being principally concerned with backbench unrest, the prime minister could shift her focus to negotiations with the EU in the hope of coming up with a deal.

So what might that deal look like? Assume, as many do, that the Chequers meeting signals a far softer Brexit than still implied by May’s red lines. That would mean, ultimately, that the PM will have to concede further ground to the EU, essentially negotiating some form of customs union and membership of the single market.

If she is still looking for a deal with the EU27 by March 2019, the clearest path is through an agreement that looks a lot like “Norway Plus”: if not continued membership of the European Economic Area, at least something that bears a great deal of resemblance to the status quo.

What, then, would the House of Commons do? Obviously, we cannot be certain, but it is conceivable that such a deal could find favour with enough MPs to pass the House. Not least if the alternative, with the Brexit clock running down, might be no deal.

And imagine. Under those circumstances, this prime minister, apparently fatally weakened time and time again, might emerge as a heroine. The leader who, against all the odds, not only took the UK out of the EU but did so in a way that minimised damage to the economy. At which point, she might silently offer up her thanks to David and Boris for bringing things to a head with their resignations.