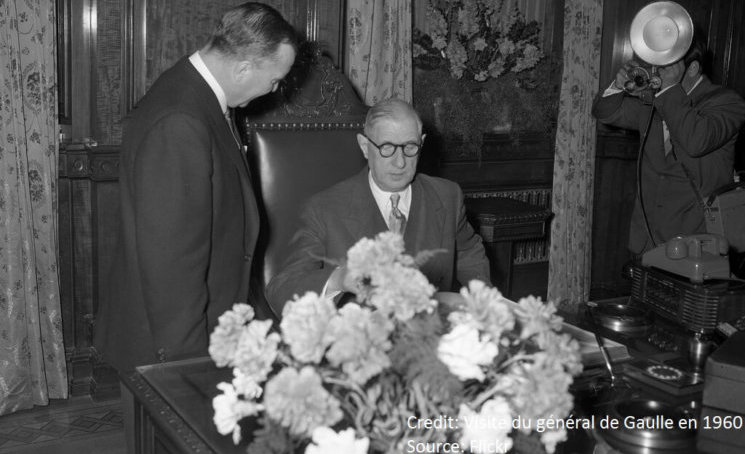 Angela Merkel’s domestic political problems could see French President Emmanuel Macron elevated to the de facto leader of the EU member states during the Brexit negotiations. The last time a French President (Georges Pompidou) was seen as in charge in Europe, Britain’s third application to join what was then the European Community, was accepted. But the previous President of France was not so accommodating.

Fifty years ago today, French President Charles de Gaulle called a press conference in which he announced that Britain was fundamentally not ready to join the European Community (EC). He argued that the common market as it stood was incompatible with everything that mattered: Britain’s relationship with the USA, the way she fed herself, the state of sterling, and her enormous external debts.

De Gaulle is often viewed as the villain of this piece. But a close look at what he actually said suggests he may have had little choice but to turn Britain’s application down. It was a decision that was to have more momentous consequences than could possibly have been realised at the time – because it led to considerable economic and political contortions in order to eventually join just over five years later. The causes of these contortions then played their part in the Leave vote in last year’s referendum.

In May 1967, de Gaulle argued that Britain’s entry would only be possible when ‘this great people, so magnificently gifted with ability and courage, should be on their own behalf and for themselves achieve a profound economic and political transformation, which would allow them to join the Six Continentals’.

Then Prime Minister Harold Wilson tried to keep up the pressure, and the UK even tried threats, including an off-the-record briefing of journalists in October 1967 in which Junior Foreign Minister Alun Chalfont said the UK would have to review its military commitments in a Europe if de Gaulle vetoed its application.

None of this worked. It didn’t help that in November 1967, Wilson was finally forced to devalue the pound, very soon after denying he would have to do it. The Prime Minister also managed to devalue himself during the process, by claiming in a TV appearance that “It does not mean, of course, that the pound here in Britain, in your pocket or in your bank, has been devalued.” This may have been true at your local shop, but not when buying the many imports Britain needed to sustain itself.

In his press conference of November 1967, de Gaulle opened by pointing out that whilst Britain joining the EC ‘arouses wishes everywhere that are quite justified ideally’, it was a matter of knowing if we could join ‘without breaking what exists’. De Gaulle noted that Britain were pursuing the negotiations with ‘extraordinary insistence and haste’, suspecting it was related to the same issues that had led to the devaluation.

He also pointed out the contradiction between us saying we accepted without restriction all the provisions that governed the six members, and asking for a negotiation. We could either accept the provisions or we couldn’t.

Having run through the history of Britain’s lack of serious engagement with the European project, de Gaulle suggested that Britain were now back at the EC’s door because of ‘the great economic, financial, monetary and social difficulties with which Britain is at grips’. Well, that application could not be successful without ‘a radical transformation of Great Britain that is necessary in order for her to be able to join the continental States’.

There followed a long list of what would needed to change. Britain had a chronic balance of payments issue, with the value of imports being much higher than the value of exports. The way it produced goods and services, its supply of food, its credit practices and its working conditions were ‘factors which that country could not change without modifying its own nature’.

Restrictions that Britain put on the exporting of capital were incompatible with an EC in which capital freely moved. The currencies of the six members were moving together whereas Britain’s currency carried the weight of external liabilities of being one of the world’s ‘reserve currencies’.

Looking at all of this, de Gaulle had decided that Britain joining would lead to the ‘break up of the community’; Britain’s currency, economy and policy ‘does not at present belong to Europe as we have started to build it.‘ The French President was not going to stand by during ‘the destruction of an edifice that has been built at the cost of so much hardship and in the midst of so much hope.’

And so, it would not be for the EC to change to accommodate Britain, but for Britain to change to accommodate the EC.  De Gaulle concluded by saying that ‘Everything depends, therefore, not at all on negotiations — which would be for the Six a march toward abandon sounding the knell of their Community — but rather on the determination and action of the great British people, which would make it one of the pillars of the European Europe.’

This was to become known as de Gaulle’s second ‘veto’ of Britain’s application to join the European project. But Britain wasn’t giving up. The application was left ‘on the table’ to be reactivated whenever ‘the Six’ saw fit (a euphemism for when de Gaulle was either dead or gone). He had stepped down by 1969 and was dead by 1970. Britain’s application was accepted by the EC, led by the new French President Georges Pompidou, with the official acceptance date set for 30 June 1970.

There is a direct link between the failure of this application and the 2016 EU referendum result, because of what happened in between de Gaulle’s press conference and the eventually successful application the UK made in June 1970. When we finally joined we had to accept the full acquis communautaire of agreements, policies, rules, laws and treaties. That meant, the Common Agricultural Policy, Common Fisheries Policy, and the way the budget was set.

So, President Charles de Gaulle’s veto of the UK’s application to join the EC had serious consequences. By 2016, both the Leave and Remain campaigns had found that when they did focus groups of floating voters on the EU issues, those non-partisans could easily name the arguments against the EU, on sovereignty, borders and money, but struggled to name a single benefit of it.

The economic and political contortions required to join a EC that had been created without the UK, first due to choice, then by dint of de Gaulle’s veto, meant that when it came to time to sell the benefits of our membership, it was like walking into the teeth of a hurricane.

By Paul Goldsmith is a politics and economics teacher at Latymer Upper School in London and co-author, with Sky News senior political correspondent Jason Farrell, of How to Lose a Referendum: The Definitive Story of Why the UK Voted for Brexit – published by Biteback. He blogs frequently at www.pjgoldsmith.com.