How Remainers and Leavers plan to vote

The election campaign has now entered its final week.

But what do voters say are the most important issues facing the country?

And have their views on Brexit become more or less important in shaping how they are likely to vote? 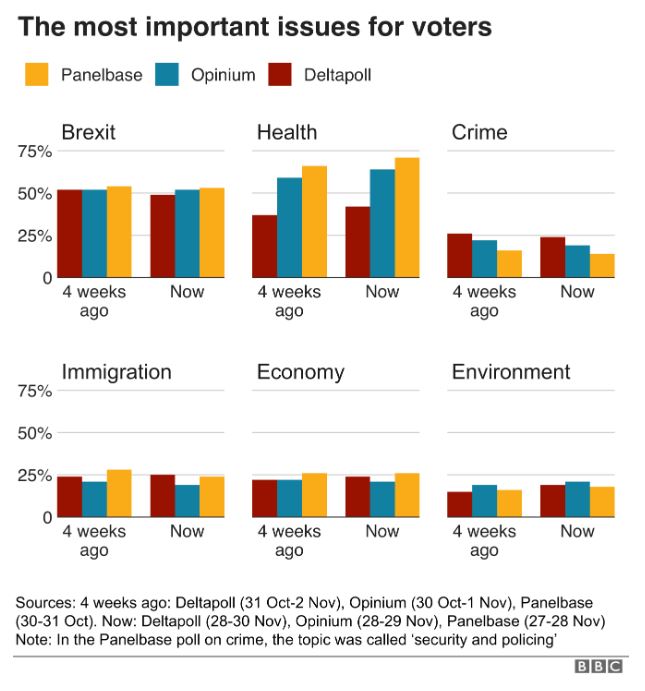 This graph shows how people respond now when asked which are the most important issues facing the country, and how this compares with the position at the beginning of the election campaign four weeks ago.

All three of the featured polls report a five-point increase in those who mention health. Labour’s emphasis on this issue seems to have made some impression on voters.

The attention given by all of the parties to the issue of climate change seems to have resulted in an increase in concern about the environment, although it is still relatively low down in the pecking order.

None of the other domestic issues appear to have become more important in voters’ minds.

Meanwhile, Brexit continues to be mentioned far more than any other issue apart from health. There has been no marked change in how important voters think it is.

People’s views on Brexit continue to be reflected strongly in how they propose to vote. 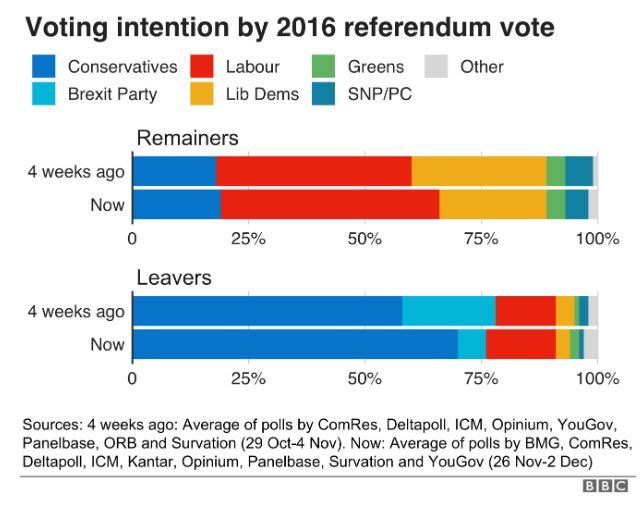 This graph compares how Remain and Leave voters say they would currently vote, and how they said they would vote shortly after the election was called.

There continues to be a sharp division between Remain and Leave voters.

As many as 79% of Remain voters propose to vote for a party backing a second referendum.

At the same time, about three in four (76%) of Leave voters say they will vote for a party in favour of Brexit.

Both numbers are similar to what they were four weeks ago.

However, within both the Remain and Leave groups, there has been a significant change in how people say they will vote.

Meanwhile, Remain voter support for Labour has increased by five points, and dropped by six for the Lib Dems.

In contrast, support for the Conservatives among Remain voters has hardly changed at all. The same can be said about the level of support for Labour among backers of Leave.

As a result, support for the Conservatives has become increasingly concentrated among those who voted Leave, while more of Labour’s vote is now garnered from those who supported Remain.

Brexit may not be the only issue in this election. But even at the beginning of the campaign it heavily shaped voters’ choices, and it looks likely to do so in the final week of the campaign, as voters make up their minds.